While no official figures have been published delineating the drop in crime, police spokesman Micky Rosenfeld says thousands of officers on the ground. 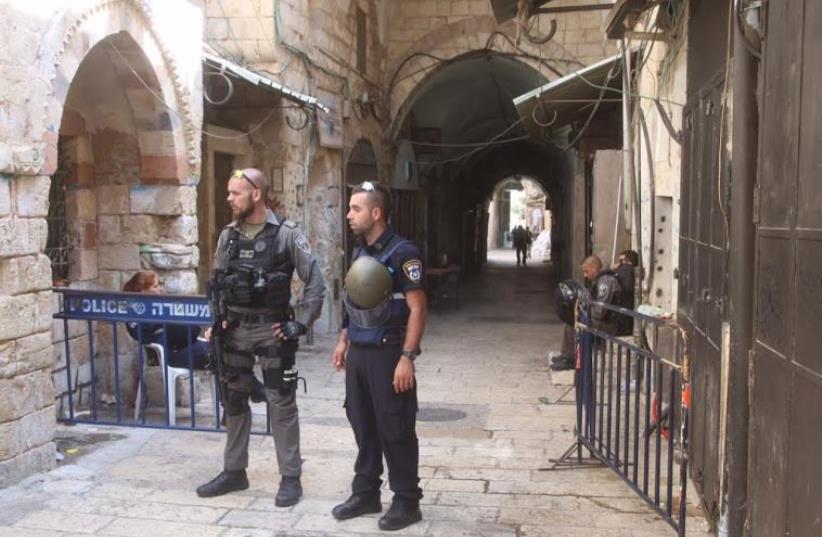 Police and Border Police in Jerusalem's Old City (file)
(photo credit: MARC ISRAEL SELLEM)
Advertisement
One positive byproduct of the ongoing heightened police presence in Jerusalem is a pronounced decrease in daily criminal activity, police said on Sunday.While no official figures have been published delineating the drop in crime, police spokesman Micky Rosenfeld said the thousands of officers on the ground – coupled with the public’s acute awareness of suspicious activity – has proven to be a powerful deterrent.“Police are primarily dealing with preventing and responding to terrorist attacks, but the public awareness of what’s going on in their neighborhoods, and of anyone who looks suspicious, has led to a decrease overall,” Rosenfeld said.According to Rosenfeld, approximately 80 percent of the roughly 5,000 officers canvassing the city’s flashpoint Arab neighborhoods and the Old City primarily focus on terrorist activity, with 20% of the force exclusively focused on criminal activity.Despite the imbalance, he said regular phone calls from concerned citizens throughout the capital reporting unusual or suspicious activity has helped streamline police responses, investigations and general preemptive action.“There are also a significant number of undercover and detective units regularly patrolling the city to immediately respond to any criminal activity,” Rosenfeld said.For the time being, Rosenfeld emphasized that police operations will continue unabated until the terror threat has been removed.“Police will continue to leave nothing to chance,” he said.