"The run begins exactly when the first day of the fast ends and the meal begins, so running is out of the question for our Muslim members," says group’s leader 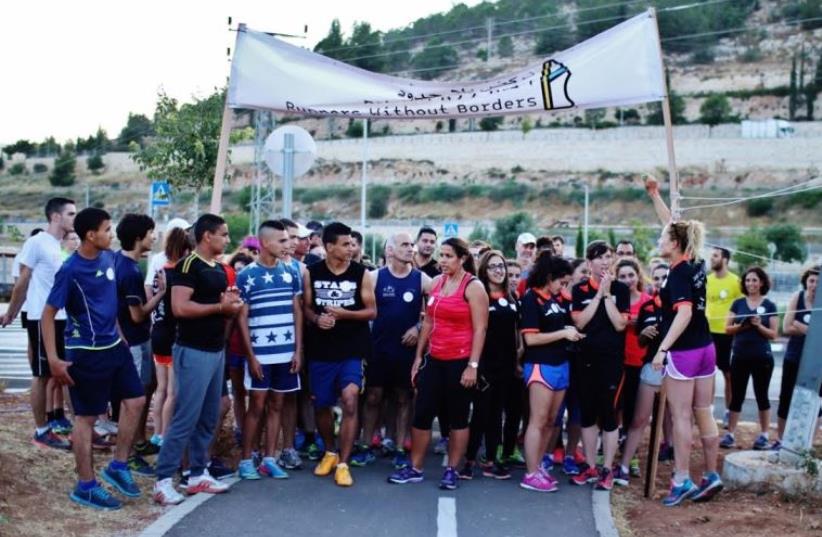 Members of Jerusalem’s Runners without Borders at an alternative race on June 11, 2015
(photo credit: RUNNERS WITHOUT BORDERS)
Advertisement
By scheduling Thursday’s fourth annual Jerusalem Night Run on the first day of Ramadan, the municipality has excluded Muslim runners in the city who hoped to participate, the head of the Jewish- Arab running NGO, Runners without Borders, said on Sunday.The popular 10K foot race through the Old City and other historic sites of the capital begins at 8:30 p.m., and is expected to draw thousands of amateur and professional runners throughout the country to the First Train Station.However, according to Israel Haas, CEO of Runners without Borders, dedicated to peaceful coexistence through running, the start time coincides with what will be the end of the first day of fasting, precluding observant Muslims from participating.“The run begins exactly when the first day of the fast for Ramadan ends and the meal begins, so running is out of the question for our Muslim members,” said Haas.Runners without Borders, which has two male and female youth and adult groups comprised of 70 Arabs and Jews who train together weekly in the western part of the capital, is divided evenly along racial lines, he said.“Since we have a group of mixed runners we decided to do an alternative 5K race last Thursday from the Malha train station to Beit Safafa and back, during which 87 people participated,” he said.“But, of course, we would have preferred to participate in the night run.”While Haas conceded that he does not believe the Jerusalem Municipality planned the timing of the race maliciously, he added that city officials should have been more sensitive to the capital’s Muslim runners.“We tried to figure out a solution with the municipality and said ‘you’re smart enough to fix the problem,’ but they didn’t, even though they tried,” he said.“They offered to delay the race by 30 minutes, but for us, even if you don’t eat a full meal, it’s not a good idea to run so close to finishing eating.”Haas continued, “I got the impression that they couldn’t move the day because of the logistics with police, etc, which is understandable.”Nonetheless, the principle issue, he asserted, is that the municipality should have looked at the Muslim calendar before scheduling a popular event like the Jerusalem Night Run.“I know the people in the municipality, and they are good people, and I’m sure they didn’t intend to do this,” he said. “I guess they just didn’t check the Muslim calendar.”Although Haas noted that he requested that the race be delayed by 90 minutes to allow Muslim runners to digest their food, he said that such resolution appears unlikely.Still, he said he hopes the municipality will learn from the mishap, and plan accordingly next year.“Next year we would love to take part in the night run,” he said. “We are part of city and believe all populations are equal, and would like the city of Jerusalem to consider changing the time to when all the population of Jerusalem can participate.”The municipality did not respond to a request for comment about the situation on Sunday.