Over 3,500 officers from multiple units to guard capital, oversee procession of thousands to Western Wall. 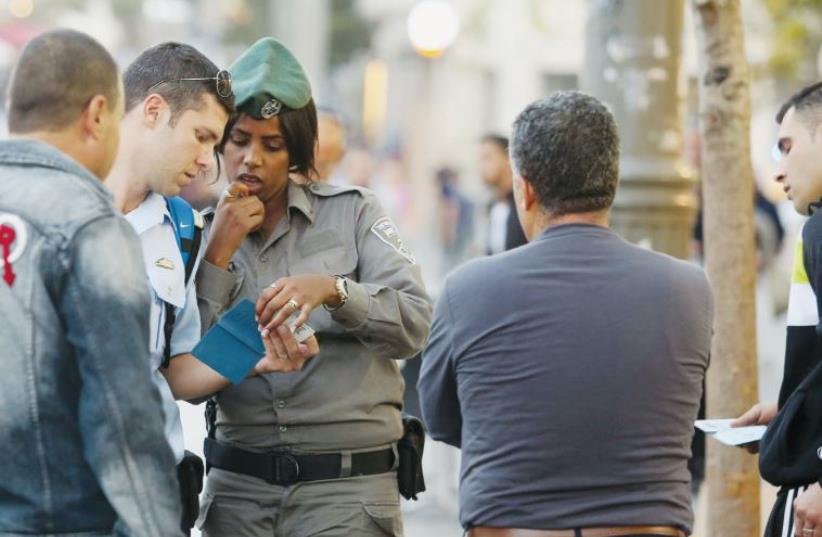 Police check the IDs of Arab men on Jaffa Road in Jerusalem
(photo credit: MARC ISRAEL SELLEM)
Advertisement
One day after a deadly Jerusalem terrorist attack jarred the nation, police on Monday said that extensive security measures for Yom Kippur, beginning Tuesday night, have been implemented throughout the capital, with “nothing being left to chance.”In anticipation of thousands of visitors from around the world visiting the Western Wall beginning Monday evening, Police spokesman Micky Rosenfeld said a breadth of units with nearly 4,000 officers will be on hand to closely monitor all activity.“Overall general security assessments have been made across Israel, with an emphasis on all public areas such as synagogues, central bus and train stations, and the Old City,” said Rosenfeld on Monday afternoon.“At the same time, during the festivals themselves, we’re having over 3,500 officers in Jerusalem to carry out security measures, with an emphasis on the Old City, where we’re expecting thousands of people to arrive to go to the Western Wall on Tuesday and Wednesday.”According to Rosenfeld, a wide range of elite units will be based in Jerusalem, including Border Police, Counterterrorism units, Special Patrol units, and Undercover units.“If necessary, they will give an immediate response to any type of incident – and these security measures are standard measures taking place despite the terrorist attack that took place over the last 24 hours,” he said.“The level of security across the country and in Jerusalem is relatively high, and this will continue for as long as necessary throughout the festival period, including Succot, which will last for over two weeks from today.”