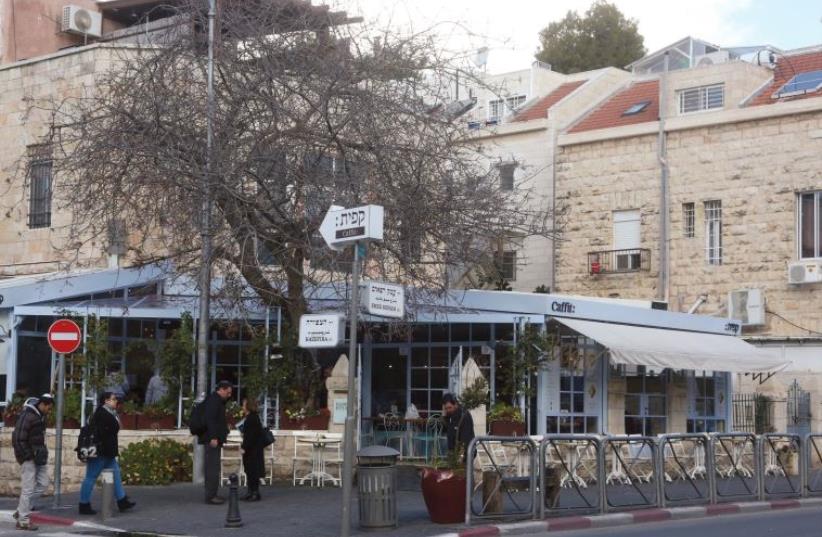 German Colony residents argue that it makes much more sense to run the light rail’s new Blue Line down Harakevet Street, in place of Emek Refaim (pictured)
(photo credit: MARC ISRAEL SELLEM)
Advertisement
Residents of Jerusalem’s German Colony say a light rail extension to the community’s main thoroughfare – Emek Refaim, long a popular hub for cafes, shops and socializing – will result in damage to historic buildings, bankruptcy for area businesses, and a pronounced drop in their quality of life.The Blue Line, as it has been named, was approved by the Jerusalem Municipality’s Planning Committee in January. The 20 km.-long additional light rail line will traverse Malha, Emek Refaim and Ramot, serving up to 250,000 residents from Gilo in the south, to Ramot in the north.On Monday night, before a meeting in Emek Refaim’s Ginot Ha’ir Community Center with municipal officials – which the press was barred from attending – dozens of concerned area residents expressed their strong opposition to the project.Laurie Blendis, who has lived in the German Colony for 20 years with his wife, Maxine, who also attended, said the project will cut “right through the heart” of the picturesque community.“I am opposed to this plan because I think it will destroy the whole essence of the neighborhood,” he said. “It’s a very old and beautiful neighborhood, and a great tourist attraction because of its beauty. It also happens to be the commercial hub for the German Colony.”While Blendis and several other residents said they heard construction was to begin in a few months, the municipality claimed the project is still five years away from breaking ground.Nonetheless, citing the numerous beloved cafes, restaurants and boutique shops that line Emek Refaim, Blendis contended that the project will “be a disaster” for area businesses that are already suffering from an economic downturn.“It will be a huge disruption and make it very difficult for people to come here, and also, very importantly, to sit and relax in the many cafes and restaurants [unencumbered] by the noise, the dirt, the dust, and everything.”Maxine echoed her husband’s sentiments.“First of all, the area is very old, going back to the Templars of the 1840s,” she said. “It’s got beautiful old houses and beautiful little roads, and it is a heritage area, which will be totally spoiled if they dig up the road. And as for the stores on [Emek Refaim], that will be the end of them.”Moreover, Blendis said the bucolic areas surrounding the First Station, a highly popular family gathering destination, will be adversely affected by the project.Isabella Ginor, who has lived in nearby Katamon for 27 years, said residents of the Germany Colony’s surrounding four communities will also suffer from the project.“If they close Emek Refaim, there is a plan to enlarge all the roads [in the surrounding neighborhoods], to increase the flow of traffic, which will destroy gardens, trees and greenery,” she said.Cecile Panzer, who has lived in the German Colony for nearly 40 years, said the light rail line will “destroy the neighborhood.”“They’d have to enlarge the street and cut down the trees,” she said. “They’d have to change everything.”Philippa Bacal, a German Colony resident of nine years, said she opposes the plan because it will upend Emek Refaim for years.“It’s going to ruin the street – it’s going to interfere with a lot of people,” she said. “The street is very narrow to begin with, and it has a character with lots of old houses, and the shops and restaurants at the moment are not doing well,” she said. “This is going to put a damper on everything.”A municipal spokesperson working on behalf of the Jerusalem Transportation Master Team, who requested anonymity, categorically denied the residents’ collective concerns on Tuesday as unfounded.According to the official, the road will not be widened, and the project will considerably lower the areas pollutants caused by buses and other vehicles, benefiting the entire community.