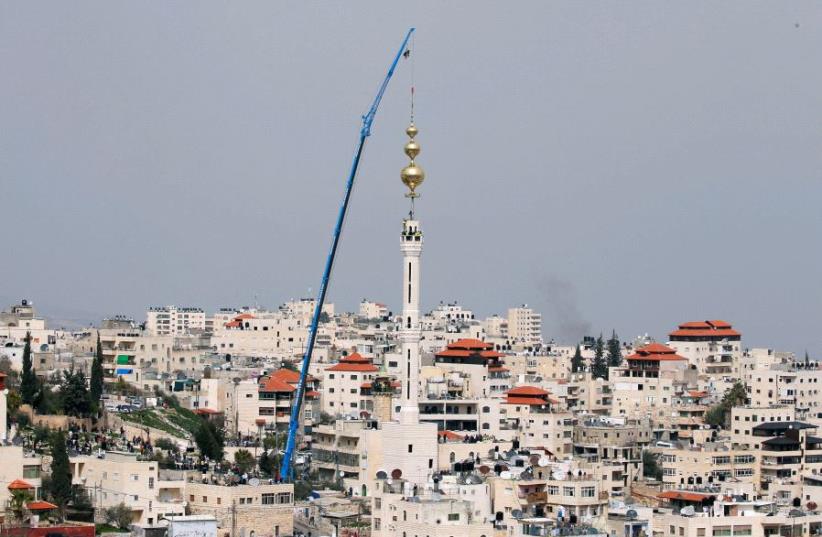 Palestinian workers prepare golden crescent to set it on top of a mosque's minaret in the East Jerusalem neighbourhood of Issawiya March 17, 2017.
(photo credit: REUTERS)
Advertisement
Residents of the east Jerusalem neighborhood of Isawiya unveiled what they said is the city’s tallest minaret, at 73 meters high, on Friday.The minaret was funded by Isawiya residents with a price tag of NIS 1 million.Muhammad Abu al-Hummus a member of Isawiya’s follow up committee said the minaret is an act of defiance against Israeli authorities. “The 50-year-old minaret needed to be rebuilt, but then we were surprised to hear about the muezzin bill and in response we wanted to affirm our existence here and to show that the sound of muezzin was here before the occupation,” Hummus told The Jerusalem Post, “So we decided to build the tallest minaret in Jerusalem.”When asked if the minaret, which was built on the neighborhood’s oldest mosque, was built with the Jerusalem Municipality’s approval, Hummus said, “We didn’t speak [to the municipality] and they didn’t speak to us,” adding, “this is a minaret for God so it doesn’t need permits, but the occupation isn’t blind and they obviously saw us building over the past year.”Joint List lawmaker Ahmad Tibi praised the minaret, telling the Post on Sunday, “This is a very unique and beautiful minaret in Isawiya and I welcome its construction and establishment.”This comes as a law to muffle mosques’ amplified calls to prayer in Israel won preliminary approval in early March in a charged parliamentary session where Arab legislators denounced the measure as racist.As the bill is in its early stages, two versions of the legislation were considered by the plenum: a stricter version, by Yisrael Beytenu MKs Robert Ilatov and Oded Forer, who suggest prohibiting the use of outdoor speakers at any time; and a softer version, by MK Moti Yogev (Bayit Yehudi) and MK David Bitan (Likud), which would forbid the use of outdoor speakers to sound the call for prayer in residential areas from 11 p.m. to 7 a.m.The call to prayer is broadcast through loudspeakers five times per day. Some Jewish residents complain of the loud noise, especially regarding the pre-sunrise call to prayer.Opponents say the legislation, sponsored by right-wing parties, impinges on the religious freedom of Israel’s Muslim minority. Arabs make up almost 20% of the population and have long complained of discrimination.Enforcing the bill may put the Israel Police into a bind as hundreds of calls to prayer in Jerusalem and Arab-Israeli towns would be deemed illegal.Yesh Atid MK and former Jerusalem Police chief Micky Levy told the Post in November that enforcing the bill is “impossible.”“If the police will have to go into Arab villages every day, it’s impossible. This will lead to a lot of trouble between police and Arab citizens,” Levy said.On Sunday, police spokesman Micky Rosenfeld said authorities are not commenting on how they would enforce the potential law.

Reuters and Udi Shaham contributed to this report