The organization also told institutions in which Masa participants are placed that they cannot organize any trips to these areas. 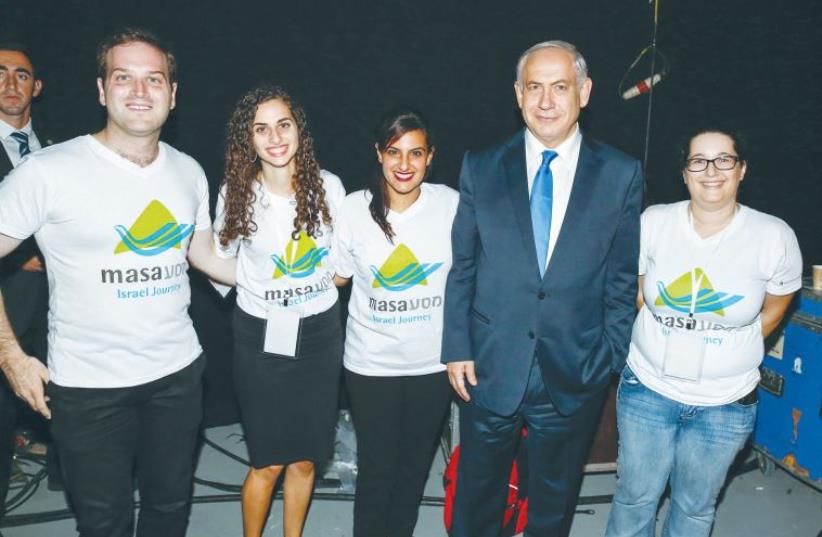 PRIME MINISTER Benjamin Netanyahu poses with participants in the MyMasa Event in Jerusalem last night.
(photo credit: ELIRAN AVITAL)
Advertisement
Masa Israel Journey has banned participants in its programs from visiting the settlements or anywhere in Judea and Samaria, and from east Jerusalem due to the current wave of terrorist attacks emanating from the region.The organization also told institutions in which Masa participants are placed that they cannot organize any trips to these areas.Masa has brought some 120,000 Diaspora Jews ages 18 to 30 to Israel on various programs in order to strengthen Jewish identity and affinity with Israel.On Friday, the organization sent an email to institutions where Masa-funded participants are placed, saying, “Due to the security situation and the instructions of the police, all trips planned for Judea and Samaria and east Jerusalem should be canceled from now until further notice.”Masa said there was “a total ban” on going to Judea and Samaria and east Jerusalem “as a group or privately” in any way.A second email sent on Sunday clarified that travel through Area C of Judea and Samaria was permitted from Jerusalem eastward down Route 1 to the Almog Junction just southeast of Jericho, and from there southward to Ein Gedi, or northward along Route 90 to Tiberias.It also noted that trips to the Jewish Quarter of the Old City and the Western Wall are permitted, but only through the Jaffa and Zion Gates, as well as trips to the City of David archaeological site just south of the Old City.A senior official at an institution with students supported by Masa described the policy as “unfortunate and misguided,” and said the policy regarding students wishing to go to such areas in a private capacity was especially problematic.“To tell students they can’t decide to travel to places that are under complete Israeli control, even to see family, friends and teachers, is inappropriate and sends our students, other Israelis and especially our enemies exactly the wrong message,” said the official.“We feel particularly strongly about the idea of banning individuals who choose out of their own free will to go to places like Gush Etzion and Ma’aleh Adumim, which are as safe as other places in Israel and the rest of the world. Maybe we should ban Pittsburgh, Strasbourg and London next.”The official conceded that he believed Masa’s concern was “solely for security and safety” and that “their heart is in the right place,” but said the new instructions were “teaching students that everywhere in Judea and Samaria is less Israeli and less secure, and that’s not true and it’s giving in to terrorism and is totally unwarranted.”Masa said in response, “Masa’s procedures are determined in the organization’s regulations and vary according to the instructions of the authorities which direct Masa on safety and security issues. Masa is obligated to inform all bodies with which it works about these safety and security procedures and everything related to organized activities, as is the case in this instance.”The organization declined to say if visits to neighborhoods in Jerusalem such as Ramot, Ramat Eshkol, French Hill, Har Homa and Gilo, which are over the Green Line, would be permitted.On Thursday, days after the initial ban, Masa reversed the policy. "After closely consulting with the relevant security forces, Masa Israel Journey is returning to regular activity, allowing participants to travel in all parts of Jerusalem and Judea & Samaria, with prior approval from the Teva Center," Masa Israel Journey Spokesperson and External Relations Manager Oshrat Adler Eckhaus said. "Approval is subject to safety directives from the IDF and the Israeli Police."