Reuveni wrote “their gods will be destroyed” – a quotation from the Jewish Aleinu prayer – on the church. 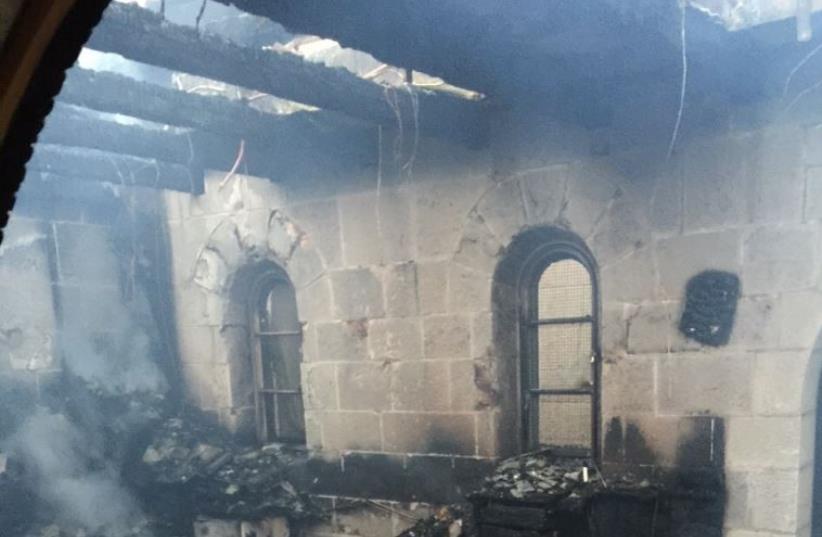 Church of the Multiplication following suspected arson
(photo credit: FIRE AND RESCUE SERVICE)
Advertisement
Eyal Reuveni was convicted by the Nazareth District Court on Monday for the arson of a world-renowned church in June 2015, one of the more infamous attacks by Jews on non-Jewish religious sites in recent years.The decision announced on Tuesday acquitted codefendant Yehuda Asraf, noting that despite substantial evidence, there was too much doubt for a conviction.The burning of the Church of the Multiplication of Loaves and Fishes near Tiberias was attributed by the Shin Bet (Israel Security Agency) to members of a radical Jewish “organization whose name in and of itself has the purpose of uprooting the foundations of the democratic rule in the State of Israel.”Evidence against Reuveni, 22, included video and DNA evidence, despite attempts he made to conceal his appearance during the arson.Reuveni refused to explain his side before police, waiting until trial to make a defense, which the court viewed as a suspicious move designed to invent the optimal alibi only after having viewed all of the prosecution’s evidence.Reuveni wrote “their gods will be destroyed” – a quotation from the Jewish Aleinu prayer – on the church.Asraf, 21, was not accused of the arson itself, but of lending his car to Reuveni to perpetrate the act.While the court found there was some valid evidence against Asraf and that his alibi was full of holes, it determined the evidence did not prove conclusively that he knew Reuveni was using his car to commit a crime.One month after the church arson, three members of the Dawabsha family were burned to death in a Jewish terrorist attack in Duma. Amiram Ben-Uliel was indicted for that crime in January 2016 and his trial is still ongoing.