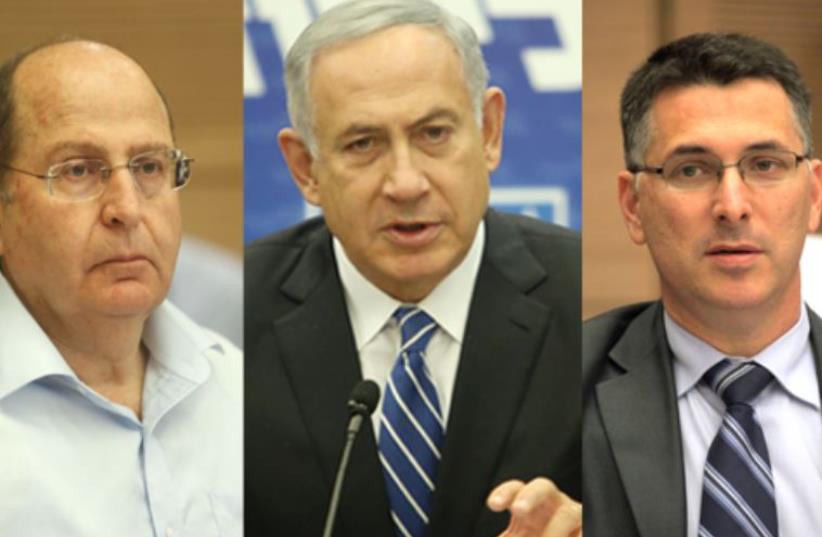 Moshe Ya'alon, Benjamin Netanyahu, Gideon Saar
(photo credit: JPOST STAFF)
Advertisement
A party led by former defense minister Moshe Ya’alon and former interior minister Gideon Sa’ar would win the same number of seats as Prime Minister Benjamin Netanyahu’s Likud if an election were held now, according to a Smith Research poll taken on Wednesday exclusively for The Jerusalem Post.The poll asked about a party that would be headed by Ya’alon, Sa’ar and former IDF chief of staff Gabi Ashkenazi. It found that the new party would win 22 Knesset seats, the same as the Likud, and present the most serious challenge to Netanyahu’s leadership in many years.In last year’s election, exit polls indicated that voters who had security as their top priority chose the Likud by a wide margin, while those who had other top priorities voted for other parties. The Smith poll found that a party led by two security figures in Ya’alon and Ashkenazi would be able to take away security-first voters from Netanyahu.The Joint (Arab) List would win 13 seats, Yesh Atid 12, the Zionist Union 10, Bayit Yehudi 10, United Torah Judaism eight, Yisrael Beytenu seven, Shas six, and Meretz and Kulanu five each.The new party led by Ya’alon would take seats away from the Likud, the Zionist Union, Yesh Atid and Kulanu, attracting support from across the political spectrum. Even Meretz would lose a Knesset mandate.Asked how they would vote if only the current existing parties ran, respondents gave the Likud 27 seats, Yesh Atid 19, the Zionist Union 15, the Joint List 13, Bayit Yehudi 11, Yisrael Beytenu and United Torah Judaism eight, Kulanu seven and Shas and Meretz six each.The poll found that the Right would rise from its current 66 seats to 67. Yesh Atid would continue to grow at the expense of the Zionist Union and Kulanu, two parties that have been falling in the polls for several months. Ten percent of respondents called themselves undecided, which pollster Rafi Smith called “surprisingly low.”Asked whether they were satisfied with Netanyahu’s performance, 64% of respondents said no and 36% said yes. When divided into four categories, only 6% said they were very satisfied, 30% said they were somewhat satisfied, 30% said they were somewhat unsatisfied, and 34% said they were completely unsatisfied.The poll was taken amid headlines in Israel of Netanyahu promising an effort to reach out to the Palestinians using a regional approach, even suggesting that there were positive elements in the Arab Peace Initiative. Netanyahu’s efforts to move to the Center the same week he brought Yisrael Beytenu into his government apparently failed to persuade not only the international community, but also voters in Israel.Secular respondents were more likely to be unsatisfied than those who identify themselves as traditional.Three-fourths of Likud voters were satisfied with the prime minister’s performance, while 88% of Kulanu voters were unsatisfied.The poll was taken among 500 respondents, representing a statistical sample of the adult population in Israel. The margin of error was ±4.5%.Former environmental protection minister Avi Gabbay, who resigned last Friday making remarks similar to Ya’alon’s on concerns about extremism in the current government, said Thursday that he would return to politics.“I left the system and I plan to return for one central reason,” he said at a conference at the Citizens’ Empowerment Center. “I saw how much needs to be fixed, and I don’t think we’re in a process of repair.“Political cynicism will bring this country, at the end of the day, to a place in which it can’t make decisions,” he added.Lahav Harkov contributed to this report.