Rabbi Eliezer Igra was appointed to the Supreme Rabbinical Court with another six seats yet to be filled. 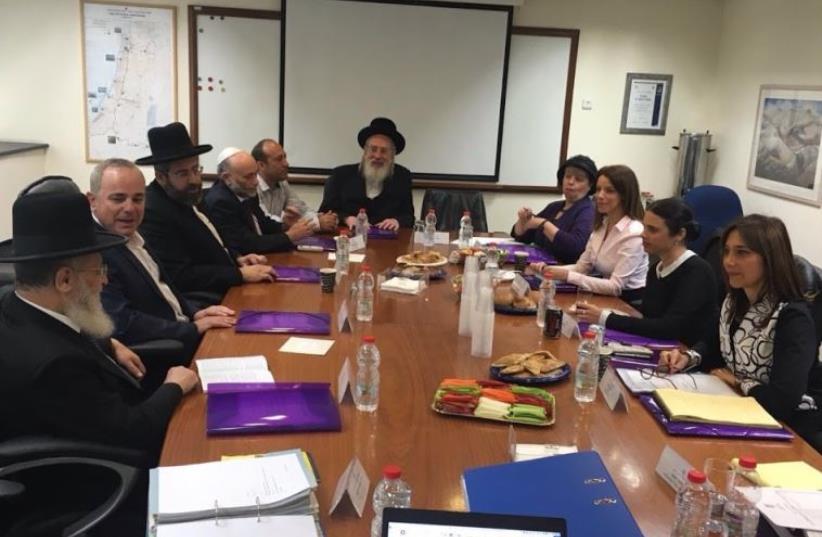 The nine members of the Appointments Committee for Rabbinical Judges convenes in Jerusalem
(photo credit: COURTESY OFFICE OF MK REVITAL SWID)
Advertisement
With the system in crisis following warnings by the High Court of Justice that the rabbinical courts could be shut down if appointments are not made, the appointments committee for rabbinical judges convened Monday to designate additions to the Supreme Rabbinical Court and regional rabbinical courts.Just one rabbinical judge, Rabbi Eliezer Igra, was appointed to the Supreme Rabbinical Court, however, with another six seats yet to be filled. No appointments were made to fill vacant seats on the regional courts.Also, resolutions to the disputes over the possible appointment of liberal judges to the higher and regional courts were postponed to another meeting of the committee set to convene later this month.Igra, from the national religious community, has served as a temporary rabbinical judge on the Supreme Rabbinical Court since 2012 and is considered to be a moderate, if unspectacular, voice on the judicial body.One prominent activist for the liberalization of the rabbinical courts said Igra’s election was not especially substantive and that he does not fulfill the requirement of rights groups to put a liberal champion on the court bench.Speaking about the rabbinical judges appointments process, Rabbi David Stav, chairman of the Tzohar Rabbinic Council, strongly criticized Bayit Yehudi leadership on Monday, saying the party did not fight hard enough on issues like the rabbinical courts appointments.In the round of appointments to the regional courts made in September last year, the three leading national religious candidates promoted by the liberal members of the committee were not elected, which critics blamed on a lack of resolve by Bayit Yehudi in the face of haredi threats against the coalition.Specifically, Stav accused Bayit Yehudi of sacrificing Jewish identity in Israel for the sake of the settlements in the West Bank.“The Jewish identity of the State of Israel and its religious services have been sold to the haredim in return for settlements in Judea and Samaria and other things,” Stav said on Radio Galey Yisrael.Stav said he supported settlements, which he said were important for the future of the Jewish state, but that Jewish identity was critical for Jewish existence and that the political deal between the national-religious leadership and haredim of settlements for Jewish identity should be ended.