According to the ministry’s Police Investigative Department, there was not enough evidence of criminal wrongdoing against the officers. 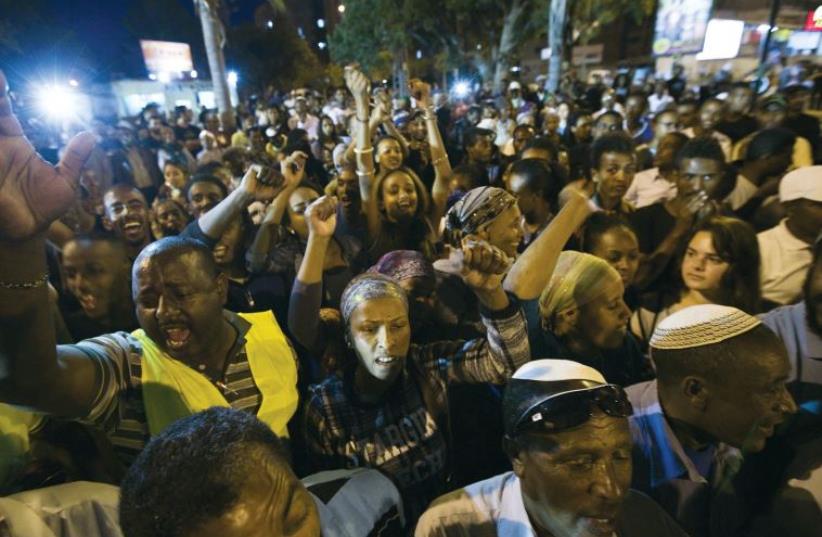 ETHIOPIAN-ISRAELIS block a road as they protest against what they say is police racism and brutality, near the southern Israeli town of Ashkelon on May 7, 2015.
(photo credit: REUTERS)
Advertisement
Police tasered, allegedly abused Yosef Salamsa months before he committed suicide • By BEN HARTMAN The Justice Ministry has decided to close criminal proceedings against the police officers at the center of a case of alleged abuse that was at the center of Ethiopian-Israeli protests against police brutality in recent years.According to the ministry’s Police Investigative Department, there was not enough evidence of criminal wrongdoing against the officers who used a Taser on Yosef Salamsa, but their conduct during the incident should be examined by the police disciplinary branch.The ministry did however rule that the officers lied when they said in their report that they had warned Salamsa before they used the Taser on him.The incident took place in March 2014, when Salamsa was arrested in Zichron Ya’acov during an altercation with police, who tasered him in the stomach and arm and took him to the Zichron Ya’acov police station. His father found him hours later outside the station in handcuffs and ankle cuffs.According to Yosef Salamsa’s relatives, after the incident he fell into a downward psychological spiral, and in July 2014 he took his own life.The family filed a complaint with the Justice Ministry on April 3, 2014, but after Salamsa failed to heed their calls to come and give testimony to investigators, they closed the case, saying that they were unable to get his version of events.After his suicide, the family again contacted investigators, who reopened the case.While the ministry said it did not find evidence of criminal wrongdoing, it found a number of instances of misconduct by police, including that they did not warn Salamsa before using the Taser and lied about doing so in their report.In addition, they said the decision to leave him outside the station was wrong, though they determined it was for 35 minutes and not hours as had been alleged.The case of Yosef Salamsa was a highly emotional one for many in the Ethiopian- Israeli community, and at protests held this past year against police brutality he was the subject of chants and his face was printed on T-shirts and signs seen throughout the crowds.