Kazakhstan: Allied with Muslim bloc, but great friend of Israel 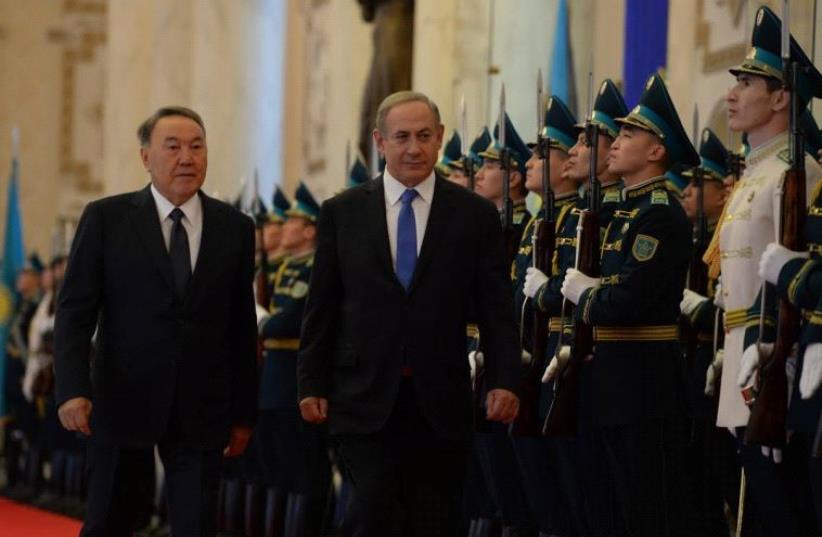 Prime Minister Benjamin Netanyahu with Kazakhstan President Nursultan Nazarbayev
(photo credit: CHAIM TZACH/GPO)
Advertisement
ASTANA – Mutual exchange of technologies, flourishing business connections and warm bilateral diplomatic relations are the main characteristics of Israel and Kazakhstan, said Michael Brodsky, the Israeli ambassador to Kazakhstan.Commemorating 25 years of diplomatic relations, Brodsky said Kazakhstan is one of Israel’s major friends. In many fields, mainly the economic one, Kazakhstan has a great interest in Israel.Last December, Prime Minister Benjamin Netanyahu visited Kazakhstan. During the visit, which was described as positive by both sides, the parties held a joint business forum, which included dozens of participants.“This country thinks through the economic perspective,” said Brodsky.“And despite the fact that it is mostly Muslim, it has no affect on our bilateral relations.“They want us to prosper, and Israel is the role model for them,” he added. “They want to learn from us.All this ‘make the wilderness bloom’ myth is very appealing to them.Astana is a great example of that – it started off as a vision of [Kazakhstan] president [Nursultan] Nazarbayev and became a reality, just like the State of Israel.”Brodsky mentioned three main fields in which Israel and Kazakhstan share information and technology: Agriculture, health and security.“In these fields we have a lot to offer to Kazakhstan,” he said. “They see them as ‘must fields,’ meaning that cooperating with us on them is not luxury, and it won’t be affected by situation changes.“There are many Israeli companies that operate here, and there is always talk on how to expand it,” he added.There are some 10,000 Jews living in Kazakhstan. The vast majority came from the western part of the USSR or eastern Europe in the past century. However, Farsi-speaking Jews lived in the southern areas of the country and along the Silk Road trading route for thousands of years.Brodsky noted that Kazakhstan is known for being very welcoming for Jews. He said there is no antisemitism in the republic.“There is a small Jewish community, and it is spread out in several cities,” he said. “The Jewish life here is flourishing. There was never antisemitism in Kazakhstan. The Kazakh people is known to be tolerant and has a great attitude to all nations.“The Jews also remember the special treatment they received when they got here during World War II, when they fled from eastern Europe,” he added. “Many Jews arrived here during that period.”Despite that, Brodsky said that when it comes to the United Nations and its agencies, Kazakhstan is still committed to the larger Muslim bloc.“When it comes to the bilateral relations, we have very warm connections and they are openly proud of it. But it is clear that they are obligated to the Muslim world,” Brodsky said. “We can see it in their [UN] votes. They voted against us not once, but we speak about it openly.We know that they have other considerations and we are not letting it damage our great relations,” he said.