“The Holocaust did not skip over anyone. We know that Libyan Jewry went through the Holocaust, even if we found out about it later.” 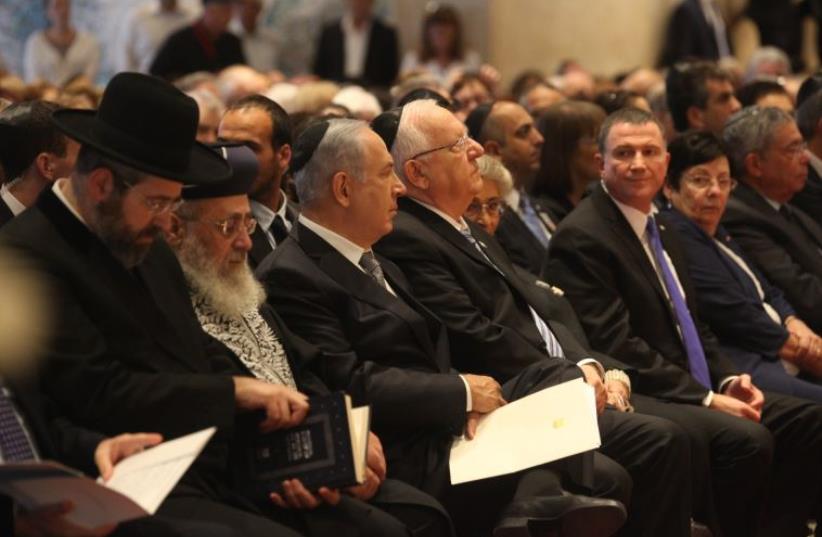 "Every man has a name" ceremony for Holocaust Remembrance Day
(photo credit: MICHAL FATTAL,KNESSET SPOKESMAN'S OFFICE)
Advertisement
Many names of Jews from North Africa, Greece and Turkey were among those read in the Knesset’s annual “Everyone Has a Name” ceremony on Holocaust Remembrance Day on Monday.Each year, the Knesset holds a ceremony in which MKs and other officials read names of those who were murdered by the Nazis. Most name their relatives.This year, many of the names read were of Sephardic Jews, who are often overlooked in Holocaust memorial ceremonies.At the ceremony’s opening, when six candles are lit in memory of the six million who perished, Kulanu MK Merav Ben-Ari’s mother, Eti Ben-Ari, lit a candle for those killed in the Jado concentration camp in Libya, including her relatives.MK Ayelet Nahmias-Verbin (Zionist Union), her uncle, and her cousin, the actress Chani Nachmias, lit a candle in honor of their relatives from Salonika, Greece, who were murdered.Finance Minister Moshe Kahlon said, “The Holocaust did not skip over anyone. We know that Libyan Jewry went through the Holocaust, even if we found out about it later.”Kahlon said that as a child growing up among Libyan immigrants in the Givat Olga neighborhood in Hadera, he and his peers did not have proper respect for those who survived the Jado camp, and he apologized for their behavior, before reading names.Deputy Finance Minister Yitzhak Cohen of Shas also read names of relatives from Libya, as well as from Turkey.MK Amir Peretz (Zionist Union) said that the US Army’s actions in Casablanca saved many Jews in Morocco, where he was born. As he does each year, Peretz read names of North African Jews who were in France during the Holocaust and were murdered by the Nazis.The Knesset also launched an exhibit titled “Longing,” featuring art by Holocaust survivors Yitzhak Belfer of Tel Aviv and Chava Pressburger of Omer. Belfer was born in Warsaw, raised in Janusz Korczak’s orphanage and escaped to Russia during World War II.After the war, he found out that his whole family was murdered in Treblinka. Pressburger was born in the Czech Republic and survived the Terezin camp; many of her relatives perished in the Holocaust.Each year, artists who survived the Holocaust are given the opportunity to show their work in the Knesset.