Only 5% of the 271 assaults were reported to the police. 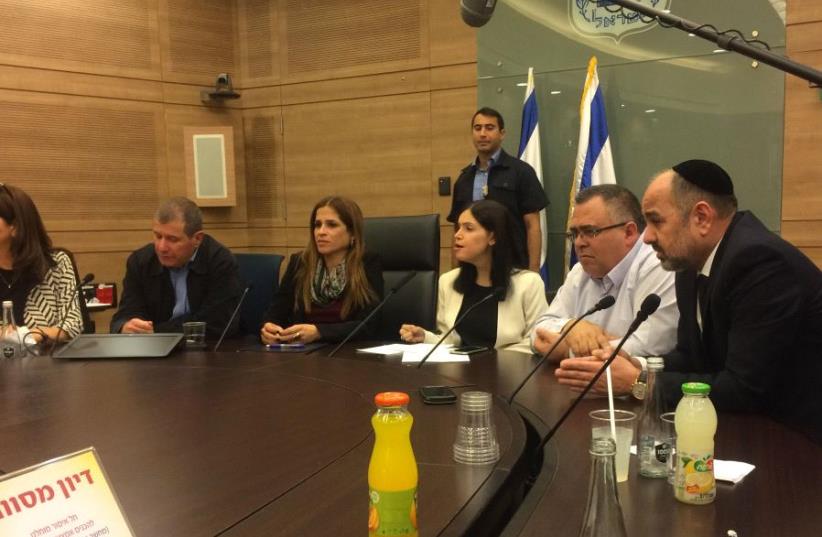 The Knesset State Control subcommittee
(photo credit: UDI SHAHAM)
Advertisement
A plea for stricter punishments and regulations in institutions of higher education was the focal point of Monday’s meeting of the Knesset State Control committee led by Zionist Union MK Shelly Yacimovich.The meeting centered on the State Comptroller’s report from 2013 regarding the prevention and treatment of sexual harassment reports in such institutions.In addition, recent data from the previous academic year showed that there were 271 reports of sexual harassment in colleges and universities – of that only 5% of cases were reported to police.During the meeting, Yacimovich explained that one of the main reasons why most victims don’t come forward is because “there is more denial and greater cover-ups in academic institutions than in other institutions.“Instead of being leaders in the struggle, they are stuck in the past – protecting their attackers,” she said.Yacimovich highlighted that the State Comptroller’s report “pointed to a methodical cover- up, which stems from the desire to preserve the institution’s prestige – there is a lack of proper treatment of these cases, plus it is problematic that the disciplinary committees are staff members themselves, and members also decide on members.”Maayan Hajaj, coordinator for complaints of sexual harassment for the National Union of Israeli Students said, “There must be an immediate change in the composition of those who judge complains of sexual harassment in academic institutions.“It does not make sense that fellow lecturers are judging each other on such sensitive issues,” she said.Hajaj said that “this leads to a lack of reliability within the system and this changes the rules on what is actually being reported.“Sexual harassment is not a subject that can be equated with other disciplinary offenses. We in the Association call for a court that is comprised of representatives from the public: students, administrative and academic staff, all of whom have a voice and equal status,” she added.The discussion was also attended by Hebrew University Graduate Efrat Yaakov who spoke about her experience with harassment with her former professor, Mario Schindler.Although he was eventually fired, she described her ordeal, which began with him calling her into his office to ‘talk about her studies,’ eventually, this pattern escalated until she reported him.“The game you play in your mind; did it happen? Did it not happen? We are dying to scream but the ‘code of silence’ is preventing us from doing anything,” Yaakov said.She explained how it affected her psychological and physical well-being, noting that she had difficulty concentrating and absorbing information in her classes.Yaakov said, “I was lucky, I had a positive outcome and worked with really supportive people.”However, the process she went through following the harassment, was also difficult. She had to deal with questions that included: “Why did you wait? Are you weak? Why didn’t you say anything before?” Yaakov said that such questions created more barriers in her process. “It was difficult because you are wasting your learning time to press charges.”Miriam Schler, head of the Sexual Assault Crisis Center in Tel Aviv, reported that 10% of the sexual harassment cases the center deals with are from students in colleges and universities.Schler urged the panel to require students and staff to attend an orientation workshop on sexual harassment. “Unfortunately, there is no obligation today for the staff to undergo such training.“The staff needs to be held responsible and held to the same standards as their students,” she said.Yacimovich adjourned the two-hour meeting by announcing that there would be a follow- up meeting. She called on the Center for Higher Education and the National Union of Israeli Students to conduct independent audits within those institutions.“There is a fundamental failure that is allowing for cover- ups and denials,” Yacimovich emphasized.“The time has come for academic institutions to stop hiding behind formulations and bureaucracy, as far as attacking women is concerned – the world is changing.“I am saying to university presidents and deans who are mainly older men: ‘It is 2017! It’s time to institute another policy.Something has changed in the world since you were students, and I call on each of you to be the head of a lion and not the fox’s tail in this struggle,’” Yacimovich concluded.