Since the beginning of 2017, there have already been nine incidents of construction site related deaths. 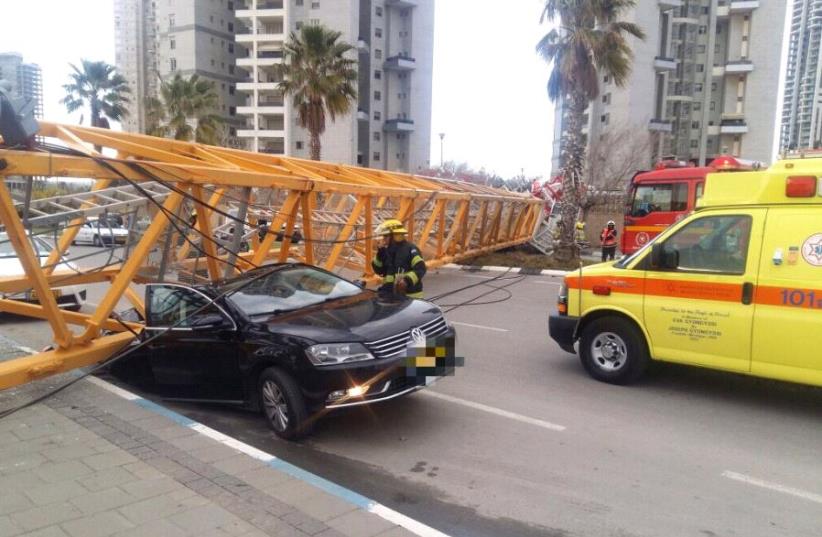 Crane collapse in Bat Yam
(photo credit: MDA)
Advertisement
Construction all over the world is a dangerous industry, but in Israel the situation is very problematic, Ran Cohen, head of the Occupational Safety Division at the Labor, Welfare and Social Services Ministry, said on Monday.Speaking to The Jerusalem Post following a string of construction-site accidents and deaths, including the death of a worker on Sunday at a site in Tel Aviv, Cohen provided an overview of the situation in Israel and discussed the measures being taken to curtail the phenomenon.Since the beginning of 2017, there have already been nine incidents of construction site related deaths, he said, while last year there were over 50 deaths.Furthermore, according to a joint report released by the National Insurance Institute and the Economy Ministry in 2016, there have been some 18,000 workplace-related injuries at construction sites over the last five years.Despite this, there are only 18 supervisors employed by the ministry responsible for some 13,000 known construction sites throughout the country.Cohen’s division is responsible for overseeing safety measures for construction sites as well as some 60,000 office buildings and an additional 100,000 sites such as elevators, sports fields and defibrillators in public sites.According to Cohen, over the course of 2016 his division inspected some 6,000 construction sites and issued nearly 1,000 safety orders, including some 100 which ordered the full closure of the construction site due to serious safety defects.“When you dive into the figures of the building industry, the results are alarming,” Cohen said.While there are numerous laws and regulations in place meant to prevent construction site accidents, he explained, there is not enough enforcement and deterrence to prevent contractors from “cutting corners.”“The contractors don’t take responsibility for their legal and moral duty to care for their workers,” he said. “When you are limited in manpower and geographic location, you are unable to reach a critical mass that is necessary to curtail this. And because there hasn’t been real enforcement with teeth, the laws don’t trickle down.”However, Cohen said that since the tragic incident last year in September, which resulted in the deaths of six workers when a parking garage collapsed in Ramat Hachayal in Tel Aviv, public awareness of the issue has grown.As such, the Labor and Welfare Ministry – which has only been responsible for construction sites for the past six months, after the responsibilities were transferred from the Economy Ministry – has announced a number of measures in an attempt to curtail the phenomenon.The ministry is pushing for legislation that would impose heavy fines on contractors who violate safety regulations. “This is a very effective deterrent that we hope to add to our toolbox,” he explained.“We would be able to impose fines for every infraction that is found – something the contractors have strongly opposed.”Cohen also said that the ministry is encouraging municipalities to take a more active role in the regulation and enforcement of safety guidelines at construction sites.“We are trying to bring in the local authorities,” he explained.“Authorities and citizens have begun to understand the importance, especially after the past two incidents in Bat Yam and Ramat Gan, of the important role local authorities can have in construction site safety.”Last month, at the instruction of Labor and Social Services Minister Haim Katz, the ministry announced that it would crack down on illegal cranes at building sites throughout the country.As such, the ministry sent out teams of supervisors and researchers for surprise inspections of dozens of construction sites in order to find cranes that were being operated by workers without a license.“I am not willing to have workers endanger their lives, we will act as needed in order to improve the level of safety in the building industry,” Katz said in early February.The ministry also issued new procedures for placing, securing and operating cranes whose boundaries may exceed the limits of the construction site, thereby endangering the public, but they will only take effect in May 2017.As part of the guidelines, the ministry outlined numerous requirements, including mechanical and electrical necessities for operating cranes, inspections by a licensed supervisor and a detailed site diagram that outlines the exact placement of the crane and its borders.According to the ministry, failure to comply with these directives will lead to the issuance of safety orders halting construction.“Currently, we are the only regulator in the field,” Cohen said. “The construction industry is shattered and broken and only through joint collaboration with other ministries and actors and by passing legislation will we be able to solve the problem.”