Learning to understand the other 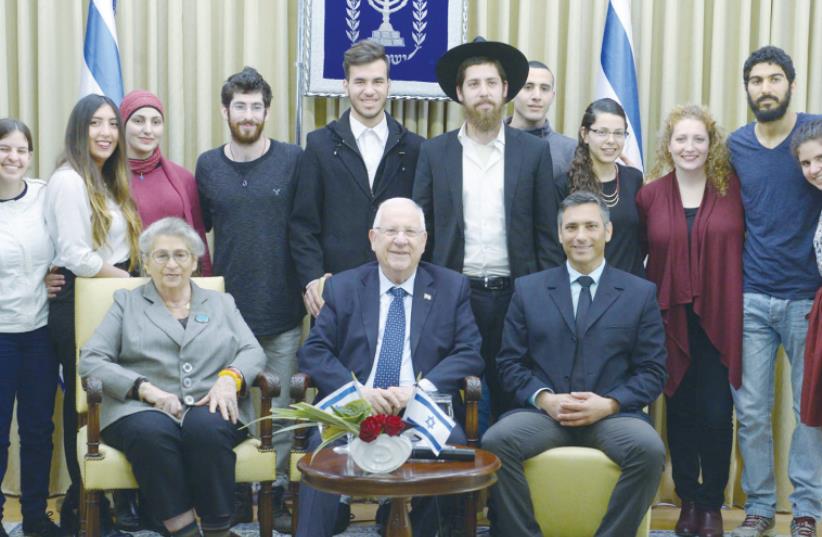 PRESIDENT REUVEN RIVLIN and his wife, Nechama, pose for a photo with participants of the ‘My Israeli Brother’ program at the President’s Residence yesterday
(photo credit: Mark Neiman/GPO)
Advertisement
The rifts in Israeli society continue to grow ever wider, fueled by political propaganda and polarized ideologies, but several organizations have initiated projects aimed at healing these rifts.Among the most fascinating of these projects is the Hinam Center’s My Israeli Brother, aimed at getting participants to know others who are different in culture, traditions and even color. Such knowledge does not come about through superficial meetings, but through spending prolonged time together in each other’s environments.This is one of many projects of the Posen Foundation created by Berlin- born American philanthropist Felix Posen, who believes that Judaism is not just a religion but a culture with many approaches and interpretations.The project is a partnership with the San Francisco Jewish Federation and other groups that believe that, in addition to being Jewish and democratic, Israel should also be a pluralistic state.From its very beginning the project had the support of President Reuven Rivlin, who since taking office has urged people to dialogue and listen to each other.When he hosted the pilot group of Jewish, Muslim, Druse, secular, haredi, national religious and Ethiopian participants at his official residence on Wednesday, he said, “What you are doing and the path you use is the most Israeli thing there is, and that’s the comprehension that we all have that we have that we can understand the different sectors of Israeli society while simultaneously maintaining our own lifestyles, values and traditions.”A video of the My Israeli Brother group has one typical scene in which participants are all dancing a debka, a traditional Arab and Druse dance, while making comments such as “We represent the Israeli rainbow” and “When we learn enough about our own traditions, we become curious about the traditions of others.”Adam Muhlbauer from Ramat Aviv told Rivlin that prior to embarking on the project, he didn’t have a particularly favorable opinion of Chabad and couldn’t understand what they wanted. In the army, he saw diversity among his fellow soldiers and became flexible in his attitude, but he still was basically ignorant of what went on with other Israelis who were not Ramat Aviv secularists.It was in Safed that he learned to appreciate Chabad, and realized that they were not out to coerce, but to embrace.Galya Globerman, who came to Israel from Costa Rica as a lone soldier, described the experience as “a fantastic opportunity to meet people from varied Israeli communities who are so different yet so alike.”Nisreen Abo Asale, from the Druse village of Beit Jann, is a medical student at Ben-Gurion University. She had always been curious about the other, she said, and had to some extent satisfied that curiosity via the Internet, “but in order to really know the other, you have to live together.”Hadar Leiman, an Orthodox young woman from Jerusalem, was amazed by similarities between the Bible and the Koran.At the conclusion of the meeting Rivlin was presented with a copy of the speech he had given at the Herzliya Conference, which included his frequently repeated mantra, “We are not doomed to live together. We are destined to live together.”