Lending a helping hand to those in need 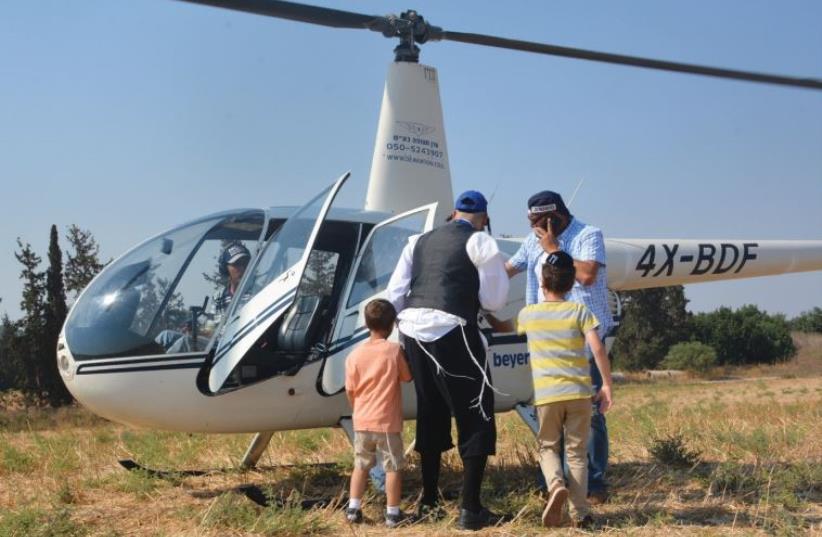 MOTTI FRIED (center) helps children from his organization Saad V’Marpe get into a helicopter for a ride as part of a recent week-long summer camp.
(photo credit: SAAD V’MARPE)
Advertisement
It’s a scorching hot summer day on a Moshav Yesodot hilltop outside of Latrun, and Chaim Mordechai “Motti” Fried is anxious.As a helicopter whirs above him and roughly 60 volunteers for his organization Saad V’Marpe, the Israel Air Force informs him that the chopper they’ve rented out for the day has exceeded its allotted time and must vacate the airspace.Most people would be resigned to this fate and send the helicopter home, breaking the disappointing news to the remaining kids who have missed their chance to ride in a helicopter for the first time.But Fried is not most people.On a Friday afternoon, when many can’t arrange a last-minute appointment for a haircut, never mind a new helicopter, Fried secures a pilot to arrive within an hour to fly each remaining child briefly above the sandy hilltop.Sure enough, an hour later, a new helicopter arrives, and the children eagerly line up in groups of four, thrilled to have a chance to see the vast landscape from the air.“One more time! One more time!” three of the organization’s volunteers eagerly chant in the helicopter beside this reporter.The afternoon of helicopter rides is Fried’s way of saying thank you for the tireless days and nights his volunteers have spent during the week-long summer camp where they care for severely disabled children.The children, who vary from one-and-a-half to 13 years old, suffer from an array of debilitating diseases such as Down’s syndrome and autism.The work is hard, but the experience is gratifying.“I see the parents of these kids, and I see how hard it is for them, and this week offers some relief,” says 17-year-old volunteer Dvora.Despite the children’s extreme cognitive and physical disabilities, the volunteers establish a true connection with them. A volunteer is assigned to every child, and they are inseparable during the week. With a comprehensive questionnaire that spells out each child’s medical and dietary requirements in detail, the volunteers become de facto parents for camp week.“I’ve seen a child who came in here only knowing how to say ‘mom’ and ‘dad,’ and now the third word he is able to utter is the name of our organization,” says Dvora.“It’s amazing.”Illness, unfortunately, does not discriminate, and as such, the organization welcomes children from all walks of Israeli life, regardless of their religious observance level or financial background.The camp does come with a NIS 230 enrollment fee, but few families have the means to afford it. Therefore, the camp, like the rest of Saad V’Marpe’s activities, relies on donations and the goodwill of others.“A lot of the people who donate are people I’ve helped in the past, and then they want to pay it forward. We also get donations from Jews in America and Europe,” Fried explains.Fried, who made aliya from Belgium 20 years ago, spends most of his days in hospitals – specifically the Shaare Zedek and Hadassah University medical centers – and seeks patients in need of his assistance.The organization’s goal is to help patients through every stage of their illness – filling out medical forms, paying for medication, and making the sometimes difficult and costly commute from home to the hospital.Fried’s wife, Goldi, explains that “I let him do everything that needs to be done in order for the organization to flourish, but it’s never enough, he always sees what else he can do to help.”As a family, the Frieds have seven children and teach each of them the value of altruism.Saad V’Marpe’s ability to alter someone’s life permanently for the better is something Goldi has witnessed firsthand.She tells a harrowing story of a mother whose son lost oxygen during a home birth.Doctors told the mother that his situation was so dire that he only had several days to live. Afraid to get too close to the child days before his inevitable death, the mother went home to grieve, and Saad V’Marpe sent a team of female volunteers to care for the sick baby.Miraculously the baby slowly showed signs of progress, and although he is blind, he is alive and well today.“Our organization is full of inspirational stories like this one,” Goldi says.“There are people who tell me, ‘Why would you spend all day doing this? Why don’t you work in a nice air-conditioned office?’” she continues.“I could work anywhere, but this fills up my heart and makes me feel like I’m doing something with my life.”Nevertheless, the experience of getting too attached to a terminally sick child can be heartbreaking. Srulik, 19, who also volunteers for the organization, understands the delicate balance between wanting to enrich the lives of those suffering and protecting oneself from getting too close.He describes a birthday party that Saad V’Marpe organized for a child dying of cancer in Hadassah’s Ein Kerem branch.“We brought a guitarist and had balloons and everybody was having a great time, until it suddenly became too much, and we started crying.The music instantly stopped,” he recalls.Despite the hardships, Fried is convinced that this is what he was put on earth to do.“They say in the Torah that the world is supported by three pillars – Torah study, following the commandments, and acts of kindness,” he says with a wistful shrug.“I suppose I took on acts of kindness.”For more information regarding Saad V'Marpe and it's charitable activities, please see www.helpgetwell.org.