Liberman: We will not 'repeat the mistake' of freeing terrorists

The parents of Israeli officer Hadar Goldin, who has been missing since the 2014 battle of Rafah, stated that they "feel abandoned by the government". 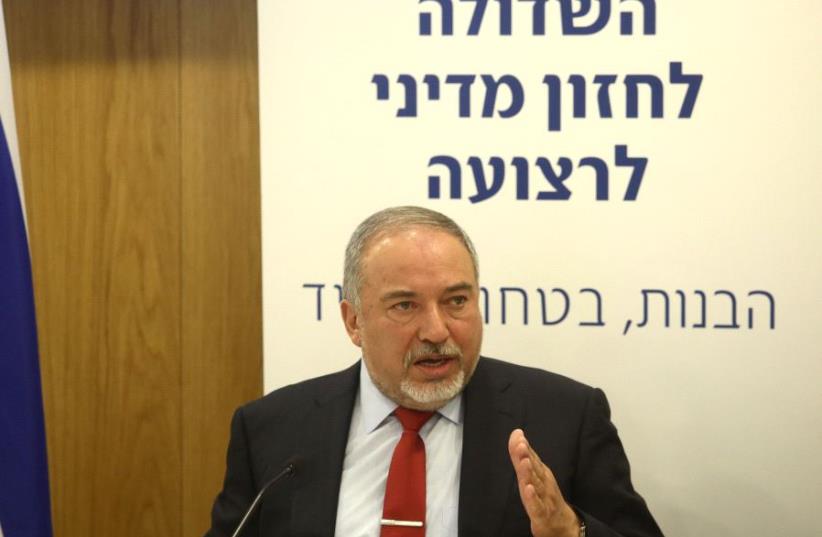 Avigdor Liberman
(photo credit: MARC ISRAEL SELLEM)
Advertisement
Defense Minister Avigdor Liberman stated on Sunday that Israel will not repeat the “mistake” of freeing Palestinian prisoners in exchange for any Israeli citizen held in the Hamas-run Gaza Strip, dead or alive.Hamas is believed to be holding the bodies of missing IDF soldiers Lt. Hadar Goldin and Sgt. Oron Shaul who were killed in Gaza during Operation Protective Edge in 2014, as well as two other Israeli citizens who voluntarily crossed into the Strip.The militant terrorist organization has attempted to use all four as bargaining chips in negotiations for prisoner releases. Addressing the resignation of Col. (res.) Lior Lotan, Prime Minister Benjamin Netanyahu's former coordinator on the issue of prisoners of war and soldiers missing in action, Liberman referred to the 2011 deal which released over 1,000 Palestinian security prisoners in exchange for the release of former IDF soldier Gilad Schalit, who was held captive by Hamas for 5 years. Lotan, who was working without remuneration, resigned on Thursday after three years in the position. He was appointed in 2014, replacing David Meidan who played a key role in formulating the prisoner exchange deal which led to the release of Gilad Schalit in 2011.  The Defense Minister stated that Israel “will not repeat the mistake of the Schalit deal, which freed 1,027 terrorists, including murderers and their agents, including Mahmoud Qawasmeh, who was released to the Gaza Strip and financed the abduction of three youths, and Yahya Sanwar, who leads Hamas in the Gaza Strip.”Kawasme helped fund the June 2014 kidnapping and murder of three Israeli teenagers in the West Bank and Sinwar, who was elected as the group’s leader in Gaza in February, is regarded by Israeli security officials as one of the most uncompromising leaders of Hamas.According to Liberman seven Israelis have been murdered by Palestinians released in the deal and 202 have since been rearrested for involvement in terrorism, of whom 111 are still in Israeli prisons.Liberman added that before replacing Lotan it was important to “draw clear borders for the State of Israel and its emissaries and to especially stand firm against our enemies and make it clear to them that we have no intention of compromising on the security of the people of Israel."The Defense Minister thanked Lotan for his commitment and effort in returning Goldin and Shaul and added that he understood and accepted the criticism from the families of the kidnapped soldiers. He added that he remains personally committed to their return as well as the other Israelis held in the Gaza Strip.In addition to Goldin and Shaul, two other Israelis, Abera Mengistu, an Ethiopian-Israeli, and Hisham al-Sayed, a Bedouin, are both believed to be held by Hamas in the Gaza Strip. Mengistu and al-Sayed both suffer from psychiatric disorders and both crossed into the Gaza Strip voluntarily. They have been missing for three years. Their cases are viewed by Israel as a humanitarian issue unrelated to the cases of Goldin and Shaul. Hamas has denied holding Mengistu hostage, but Israel has made it clear that they hold the group responsible for the safety of both Mengistu and al-Sayed.Mengistu's family said of Lotan's resignation that without reassurance from the prime minister, "no progress in the returning of our son will be made."The Goldin family has been critical of the government, saying that it has failed to engage in any serious negotiations to retrieve the bodies of the two soldiers. They expressed their appreciation of Lotan and the work he did but also stated that they "feel abandoned by the government."Goldin's father, noted historian Simcha Goldin, said on Israeli television Friday that “the government gives Hamas everything [it] wants and expects the envoy to accept it.” The family, which demands that the soldier's remains be brought to Israel for a proper Jewish burial, stated that the government is essentially paying lip service, saying they are “doing everything to bring back Hadar and Oron [Shaul]"  while in reality, "nothing is [being] done."Former Israeli Minister of Defense Moshe 'Bogie' Ya'alon said that "The resignation of Lior Lotan is a cause for worry. We have a moral duty to bring our soldiers to a [Jewish] burial in Israel and to bring back our missing citizens."Both Goldin and Shaul are believed to have been killed in Gaza during Operation Protective Edge and their bodies held by Hamas for the past four years. The militant terrorist organization has attempted to use the two soldier’s bodies as bargaining chips in negotiations for the release of prisoners.