What happens to these dogs once they are too old, sick, or injured to perform? 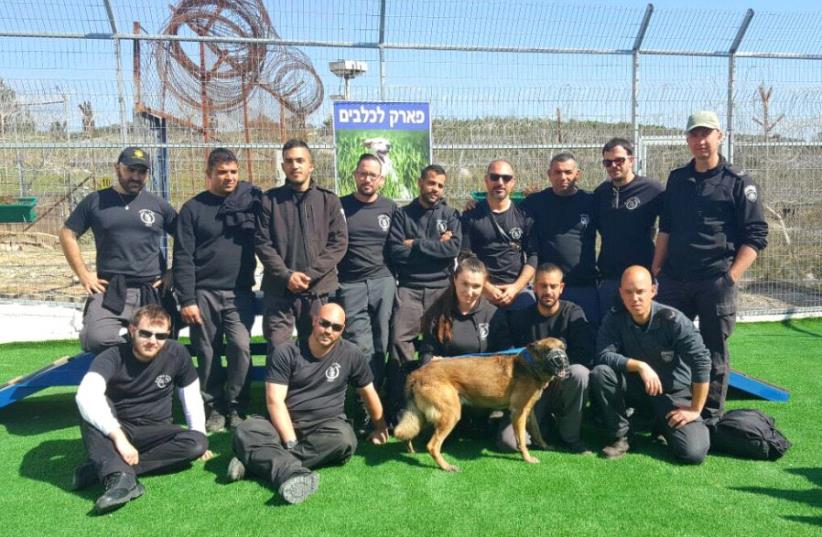 Prison service employees at the inauguration of the security dogs retirement home in Damon Prison on July 4, 2017.
(photo credit: ISRAEL PRISON SERVICE)
Advertisement
Hundreds of dogs are employed in the Prisons Service, Police, and other security bodies, acting as guards and sniffing for drugs among other duties, but what happens to these dogs once they are too old, sick, or injured to perform? Some of them are adopted, are transferred to different duties or other organizations, yet, due to the nature of their security training these dogs are considered dangerous making the adoption unlikely. Instead many retired security dogs are sent to caged pens, where they live out their lives or are euthanized.Last week the Prisons Service and the Public Security Ministry, inaugurated a “retirement home” for some of these security dogs, a project seeking to give the dogs an “honorable” retirement.A boarding house was established for some of the most “dangerous” retired dogs at the Damon Prison and inaugurated last week.Currently the Damon facility houses 40 dogs, but it can hold up to 100.“We are putting the dogs in a process of returning them to their natural state after the training they went through,” the head of the IPS canine unit, Roy Sohsahni, said in a phone interview on Monday. “We are speaking of the most dangerous dogs, and now that they are old some are getting dementia making them even more aggressive, so adoption or transferring them is not an option.”Sohsahni added that a team of four people and an additional veterinarian provide training and health services to the dogs.The Prisons Service operates the largest canine unit in Israel numbering around 600 and the Israel Police have around 220, Sohsahni said. Each year around 90 prison dogs retire due to age or other issues that leave them unable to carry out their duties.“The dogs that are here and arrived here from all the branches of the Public Security Ministry – the Police, the Fire Services, the Prisons Service – these are dogs that many people in the State of Israel owe their lives to, because [these dogs] saved them, because they risked their lives daily for their entire lives,” Public Security Minister Gilad Erdan said at the inauguration of the first boarding house at Damon Prison last Tuesday. “We must help them to respectfully finish their lives.”Sohsahni hopes that the boarding home program will expand to other prisons and include less dangerous dogs so prisoners can take part in their care as part of their recovery therapy.