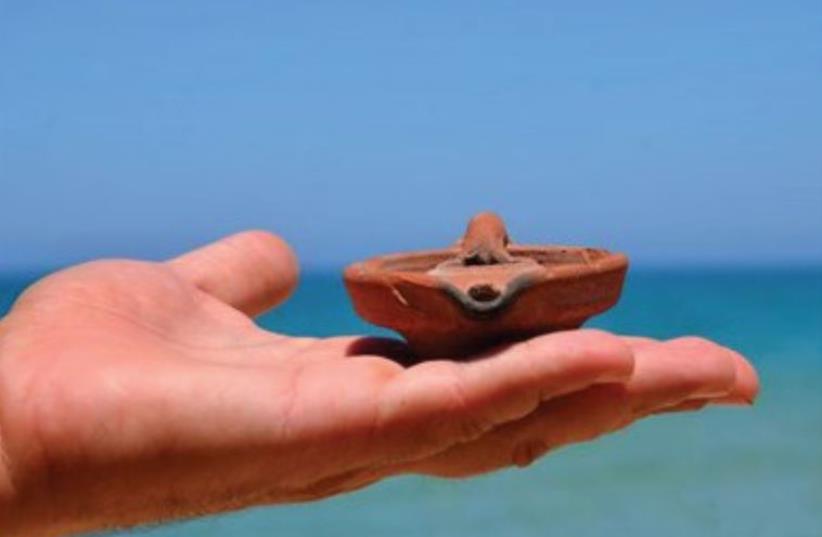 ASHKELON LIFEGUARD Meir Amsik (inset) displays the Crusader-era oil lamp he discovered recently on the beach
(photo credit: Courtesy)
Advertisement
A routine run on the beach last week turned into a fascinating archeological discovery, when the jogger happened upon a 900-yearold clay oil lamp at Tel Ashkelon National Park, the Antiquities Authority said on Monday.Meir Amsik, a lifeguard who works at the beach, said he came across the relic when he stopped to pick up planks washed from the Mediterranean onto the ancient southern port city’s shoreline.“Suddenly, I saw part of a cliff deteriorating,” he said. “So I made my up way there and saw this intriguing oil lamp lying there in its entirety. I thought it might be an antique, so I picked it up.”Amsik showed the find to a colleague at his lifeguard station, and the duo decided to contact the Antiquities Authority to report the finding.After analyzing the small oil lamp, Sa’ar Ganor, the IAA’s archeologist for the Ashkelon District, dated it to the Crusader Period in the 12th century.“You can see the signs of wear and soot on the opening,” said Ganor, noting the oil lamp was unearthed as a result of a receding and weathered coastal cliff.“The candle represents part of the cultural richness of the ancient city of Ashkelon, which was once a city of commerce,” Ganor added. “Ashkelon’s port function was to import goods from the sea and to export manufactured goods from all parts of southern Israel. At Tel Ashkelon National Park, you can find evidence of preserved life dating back to the Canaanite period 4,000 years ago, up to the modern era.”After learning of the oil lamp’s significance, Amsik said he was delighted to contribute to its recovery and restoration for the public.“Finding such a treasure is very exciting,” he said. “Just to feel like a part of history fulfills a sense of appreciation for what was here before me, and makes me feels like a link in the chain.”Guy Fitoussi, of the IAA’s Robbery Prevention Unit, praised Amsik for reporting the find.“The lifeguards on the beach are not just saving people, but even antiques,” said Fitoussi.“People must understand that ancient fossils they find belong to the state and the general public. This finding could be very valuable for research and historical knowledge for all of us. Thankfully, more and more people report finding antiques.”