Today is international ‘Animals Are Not Freight’ day. 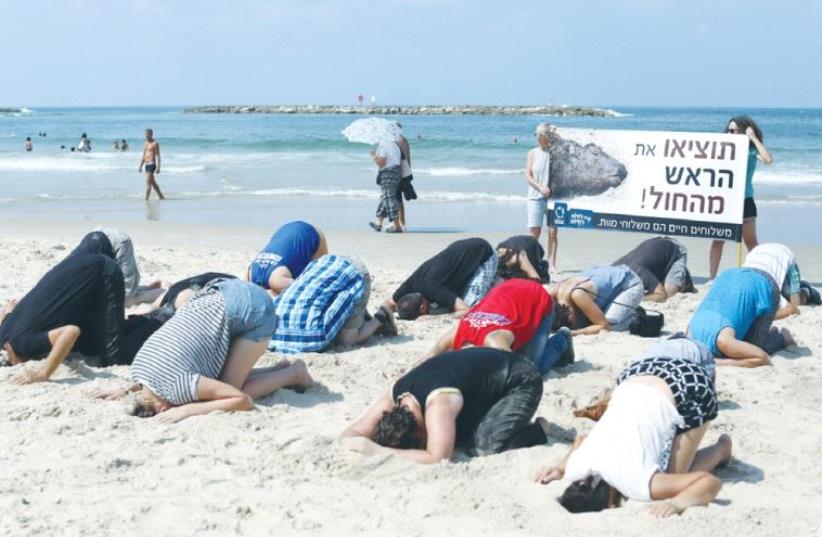 ‘STOP BURYING your heads in the sand!’ the sign reads at Friday’s protest on the Tel Aviv shore.
(photo credit: ANONYMOUS FOR ANIMAL RIGHTS)
Advertisement
As animal-rights groups around the world gear up for Monday’s “Animals Are Not Freight: Day of Action,” Israel’s activists against live shipments are taking their own fight at home to the next level.After running a billboard campaign at bus stops in both Tel Aviv and Jerusalem, the activists are now bringing the battle against the overseas shipment of live cattle and sheep to the sides of Israel’s buses. The newest advertisements, sponsored by Anonymous for Animal Rights, Let Animals Live and Israel Against Live Shipments, with Animals Australia, feature a cow’s nose trapped between bars alongside the slogan: “Enough with the death journeys! Stop live shipments now.”“Young calves and lambs just a few months old are going through days of hell and weeks of death journeys,” said a joint statement from Anonymous and Let Animals Live.On Friday, these two organizations hosted a performance at Jerusalem Beach in Tel Aviv, to protest what they describe as the “blind eye” authorities have turned to the live cattle and sheep shipments that come to Israel from Europe and Australia. The activists kneeled with their heads hidden in piles of sand, with a sign in the background that read, “Stop burying your heads in the sand! Stop live shipments.”In the background of the campaign is a petition launched by Anonymous and Let Animals Live demanding a ban on live shipments, as well as a bill on the matter proposed by MKs Tamar Zandberg (Meretz) and Miki Zohar (Likud). While during a Knesset debate last month, the Agriculture Ministry pledged to reduce live shipments, the groups stressed that an operational plan has yet to be implemented.In the first seven months of 2016, 317,185 calves and lambs arrived to Israel on live shipments, a sharp increase from the total of 292,274 in all of 2015, according to the groups.“We see the trucks on the road and prefer to avert our gaze and not know,” the statement from the groups said.“It’s time we stop closing our eyes, and face the calves and sheep who endure agonizing journeys on crowded and stinking ships, soaked in their feces, only to be slaughtered in Israel.”