Israel is eyeing the costly, next generation heavy-lift helicopter to replace its ageing Yasur fleet.

By ANNA AHRONHEIM
APRIL 30, 2018 13:58
Lockheed Martin Sikorsky's Ch-53K on the tarmac at Berlin Air Show
(photo credit: ANNA AHRONHEIM)
Advertisement
A front-runner to become Israel’s new heavy-lift helicopter, the CH-53K King Stallion, took to the skies last week making its international flying debut at the Berlin Air Show where it demonstrated its flight capabilities, maneuverability and advanced fly-by-wire technology.Built by Lockheed Martin Sikorsky, the same maker of the Yasur – which has been in use by the Israel Air Force since 1969 – the CH-53K is competing against Boeing Co.’s smaller twin-rotor CH-47 Chinook helicopter for Israel’s business – a competition that pits an expensive next-generation aircraft against a less-expensive global workhorse.With a maximum carrying weight of 36,000 pounds, the CH-53K offers three times the carrying power of its predecessor and has been designed by the company to ensure reliability, low maintenance and enhanced survivability.“I can tell you with confidence that this is not your average helicopter,” Sikorsky president Dan Schultz told reporters, explaining that while the body of the aircraft may look similar to the Yasur, the CH-53K is a “modern aircraft” with digital fly-by-wire avionics, fully integrated flight and navigation displays, composite airframe, aluminum gearboxes and triple redundant systems.“It’s going to be a safer system,” said Col. Hank Vanderborght, a manager of the CH-53K program for the US Marine Corps, which is buying 200 of the helicopters, four of which are to be declared ready for combat use by December 2019.With a cruising speed of 360 kph (223 miles/hr) and a range of 530 miles, the aircraft can be used in a variety of missions, including rescue operations, transport missions, tactical troop lifts as well as support for special operations.“For us in the Marine Corps, we have almost the same size helicopter that is replacing the 53E but this helicopter [CH-53K] can lift three times more in the same ambient conditions and that is a significant step in capabilities,” Vanderborght said.Another main advantage of the aircraft is its aerial refueling capability, which can significantly increase the range of the aircraft, he said. When asked by reporters if that meant opening the possibility to fly to Iran and back, he responded: “Correct, wherever you want to go.” 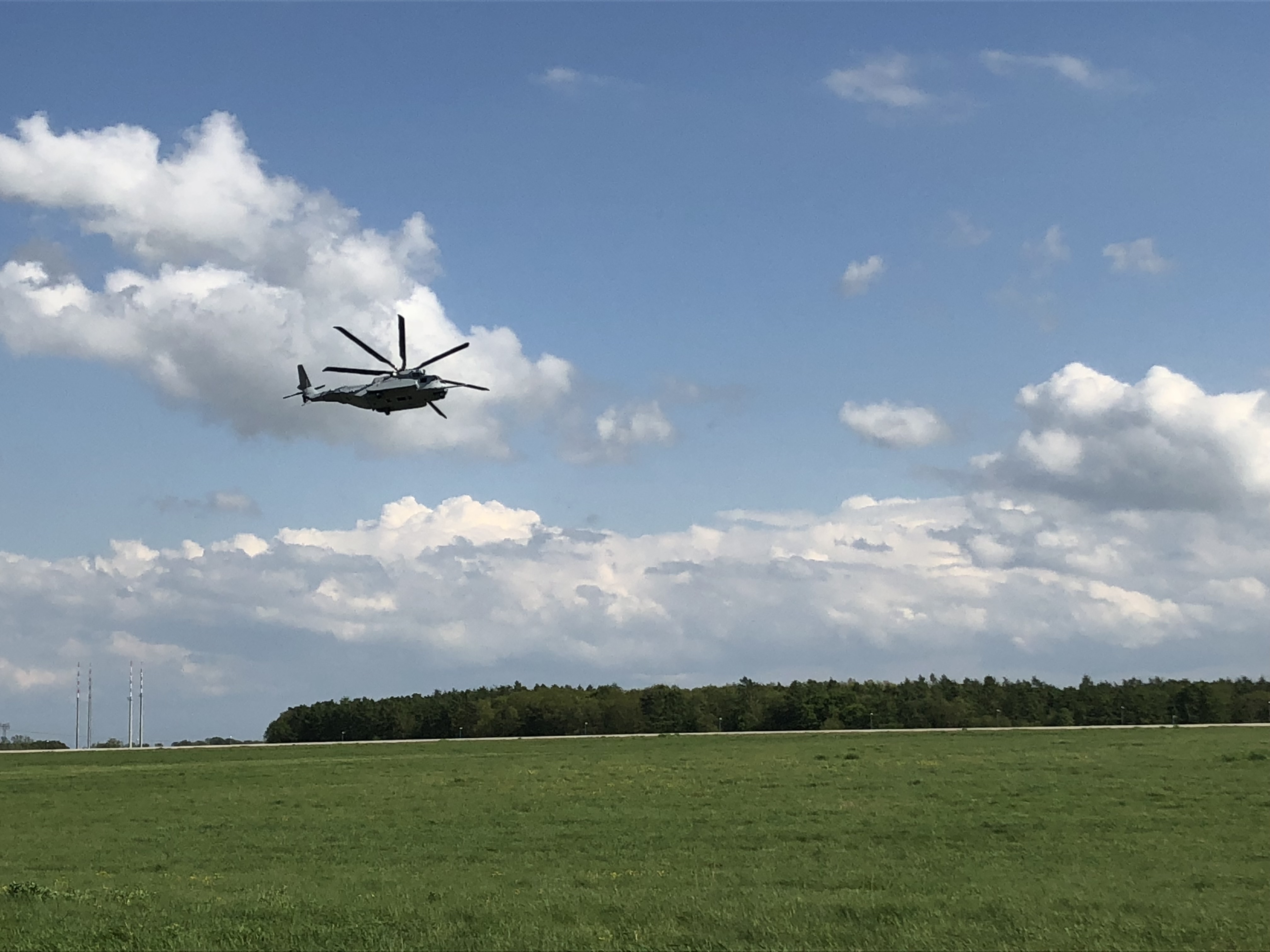 The CH-53K on it's maiden flight in the skies of Berlin (ANNA AHRONHEIM)“At the end of the day, during war, if you can’t get the stuff and the people to where it needs to be at the right time at the right place, you are not as effective in the battle-space as you could be,” said Vanderborght.Echoing Vanderborght, CH-53K pilot Lt.-Col. J.C. Morel told The Jerusalem Post that the workload for pilots in the helicopter is “significantly reduced” due to the fly-by-wire avionics.According to Morel, one of the more challenging aspects for pilots is not being able to see, such as during low-level flying or in demanding conditions such as in the desert.“If you look at the No. 1 cause of air crashes it’s usually due to human error,” he said. “With this aircraft almost everything has been offloaded to computers, which are able to fly the aircraft. When it comes down to the critical aspect of landing in the middle of the desert at night in this aircraft, you just press a button and it lands itself.”“Pilots have more time to focus on the mission, to communicate and make decisions,” he added, reducing the possibility of pilot error.According to Schultz, big data analytics is another key feature of the aircraft, which by having a predictive maintenance diagnostic system is able to reduce costs for the customer by identifying issues and notifying maintenance crews when a part needs to be replaced.Schultz said that by not outsourcing the building of its transmissions and rotor blades, the planes and helicopters “are the most reliable and dependable out there,” also boosting the readiness rates of the aircraft over 90%. 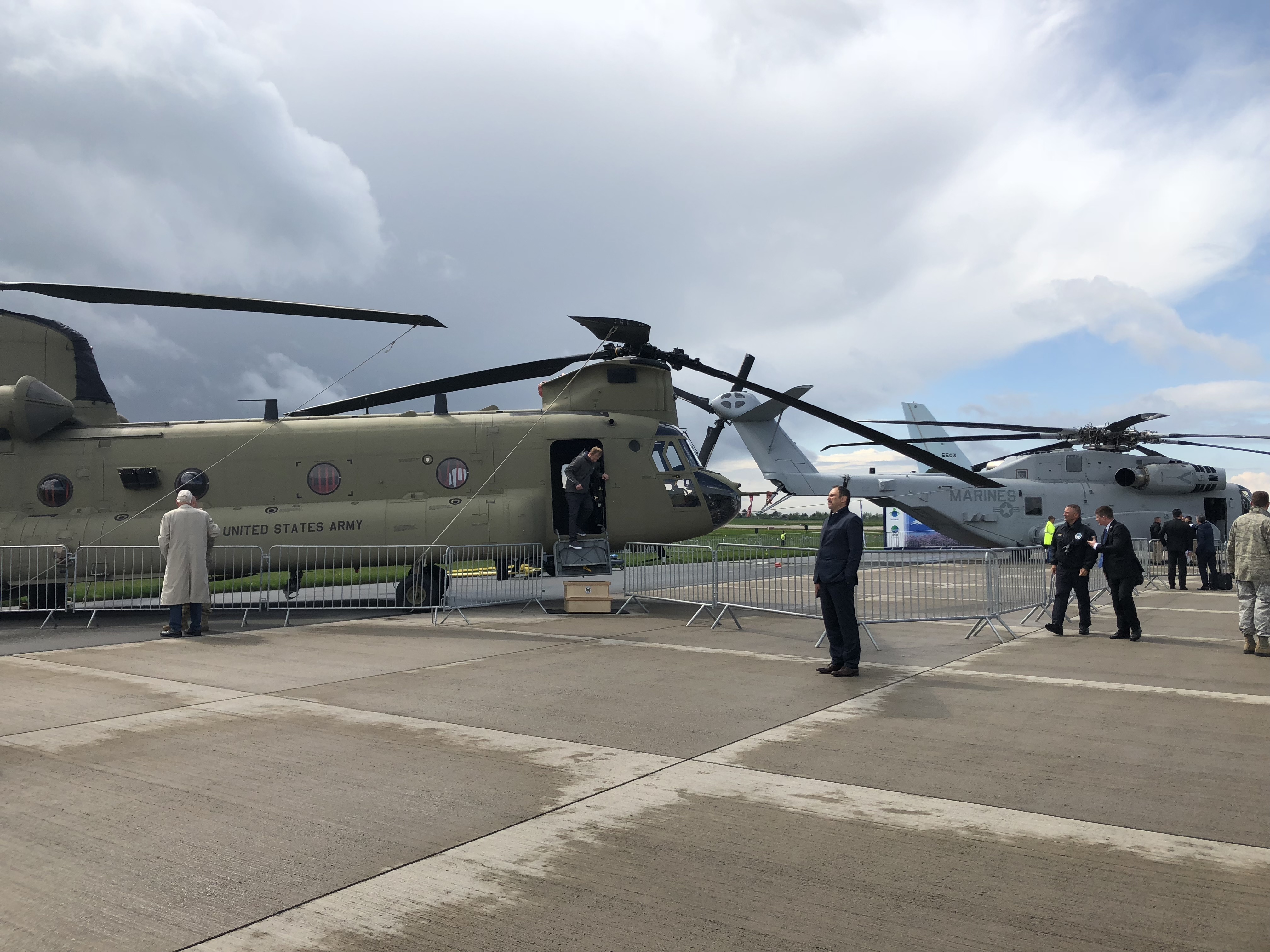 Boeing's Chinook Helicopter alongside the CH-53K (ANNA AHRONHEIM)With Israel needing to replace their 50-year-old Yasur heavy-lift aircraft by 2025, Col. Vanderborght said that the timeline to deliver the CH-53K to Israel – should the aircraft be chosen – is expected to be around 2023-2024.One main issue bothering the Israeli Air Force with the CH-53K meanwhile, is the high cost which with an average unit purchase price of $87 million can even increase across the helicopter’s life cycle including non-recurring costs.But, according to Schultz, with Germany interested in buying 45 to 60 of the CH-53K, the procurement cost for Israel could be reduced.The Chinook is an advanced and versatile multi-role and multi-mission helicopter that features a full digital management system in the cockpit. In service in 20 different countries, it is a twin-engine, tandem rotor heavy-lift helicopter used mainly for troop transport, artillery placement and battlefield resupply. It has a cruising speed of 291 kph and mission range of 370.4 km.Boeing’s Chinook was also on display at the Berlin Air Show and according to Steve Barlage, the senior manager for global sales – vertical lift division, the Chinook is “the right answer” for Israeli military requirements.“It is a modern aircraft with proven reliability, low cost and affordability when buying the aircraft and the life-cycle costs are significantly lower when compared to other aircraft in its class,” he said.According to Barlage, Boeing is currently producing three to four aircraft per month and if chosen by Israel, the IAF can have the Chinook operational within months.“They can place the order and have the aircraft operational and ready to go at a moment’s notice,” he said.