US President Donald Trump's visit to Israel may affect your commute. 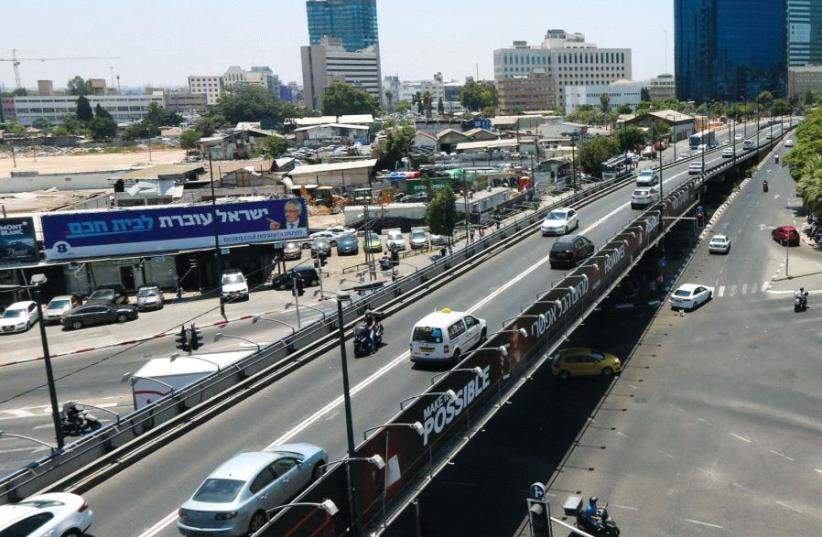 Tel Aviv traffic
(photo credit: MARC ISRAEL SELLEM)
Advertisement
Route 1, a main Jerusalem-Tel Aviv artery, will close for a few hours on Monday and Tuesday because of US President Donald Trump’s visit to Israel.The highway will be closed to traffic in both directions between the Ganot interchange, near Holon, and Sakharov Gardens, east of Jerusalem. The closure will begin around 30 minutes before Trump lands at Ben-Gurion Airport on Monday and will gradually reopen as the president’s convoy progresses to Jerusalem.On Tuesday, the highway will close from Sakharov to Ganot from 3:00 p.m. for around two hours.A similar closure will happen at the same times on Route 6 from the Nahshonim interchange near Petah Tikva to the Nesharim interchange near Ramle.While it was previously reported that Route 1 would remain open, as Trump is flying by helicopter from Ben-Gurion to Jerusalem, police are closing the route to ensure an alternate route in case Trump needs to travel by car to and from the airport.More than 10,000 police officers will take part in securing Trump’s 28-hour visit. “We studied the task in cooperation with the Foreign Ministry and the American officials in order to arrive to this point we are at presently. We are finishing the staff work and in the end will receive the US President at Ben Gurion Airport,” Asst.-Ch. Alon Levavi, head of the police’s Operations Division, said at a press briefing on Sunday.“The president’s visit is exciting and important and comes in a special week in which Jerusalem marks the 50th anniversary of the city’s reunification,” Levavi said.On Sunday, the Israel Police completed the final site checks for Trump’s visit and ran practice drills for the police helicopters that will accompany the president as he travels from Ben-Gurion to Jerusalem. Police are working in cooperation with the Shin Bet (Israel Security Agency), the IDF, and the United States Secret Service.Jerusalem will also experience major traffic disruptions. Starting on Monday at 12 p.m., intermittent road closures will take place in west Jerusalem and the Old City, including, but not limited to, the following roads: David Remez Street, Hebron Street, King David Street and the Jaffa Gate area.On Tuesday, the following routes, among others, will experience intermittent closures beginning at 8:30 a.m.: David Remez Street, Hebron Street and King David Street.For a complete list of road closures, commuters can visit the Israel Police website, police social media accounts or call the police information number 110. The navigation application WAZE will also be updated to reflect the closures.