The tobacco giant has specifically been found to have manipulated tobacco legislation in Israel and several other countries.

Silhouetted Israeli soldiers from the Home Front Command Unit take a smoking break during an urban warfare drill inside a mock village at Tze'elim army base in Israel's Negev Desert June 11, 2017
(photo credit: REUTERS/AMIR COHEN)
Advertisement
The World Health Organization's Framework Convention on Tobacco Control, or FCTC, a treaty aimed at reducing smoking globally, has been under threat from one of the world's largest tobacco companies: Philip Morris. Reuters has found that Philip Morris International is running a secretive campaign to block or weaken treaty provisions that save millions of lives by curbing tobacco use. The tobacco giant has specifically been found to have manipulated tobacco legislation in Israel and several other countries.In an internal document, the company says it supported the enactment of the treaty. But Philip Morris has come to view it as a "regulatory runaway train" driven by "anti-tobacco extremists" – a description contained in the document, a 2014 PowerPoint presentation.Confidential company documents and interviews with current and former Philip Morris employees reveal an offensive that stretches from the Americas to Africa to Asia, from hardscrabble tobacco fields to the halls of political power, in what may be one of the broadest corporate lobbying efforts in existence.Details of those plans are laid bare in a cache of Philip Morris documents reviewed by Reuters, one of the largest tobacco industry leaks ever.Dating from 2009 to 2016, the thousands of pages include emails between executives, PowerPoint presentations, planning papers, policy toolkits, national lobbying plans and market analyzes. Taken as a whole, they present a company that has focused its vast global resources on bringing to heel the world's tobacco control treaty.The documents include guidelines and country-specific lobbying plans aimed at hobbling the WHO’s global tobacco control treaty and national anti-smoking measures. Strategies include:• Lobbying lawmakers, bureaucrats and other government officials• Trying to move tobacco issues away from health departments• Deploying third parties, including retail groups, to make its case and exert pressure on decision-makers• Engaging the media on tobacco issues and generating public debate to influence decision-makersIn September 2011, Israel’s health ministry proposed new measures to regulate flavoring and advertising of tobacco products. In a draft company strategy document from October 2011, Philip Morris said the proposals included “a few excessive and disproportionate measures” such as restricting the use of fruit or chocolate flavorings in tobacco products, and broadly prohibiting advertising and marketing of tobacco. Elements of the campaign:1: Leverage established relationships with different government ministries, mobilize retailers to advocate against “excessive” provisions, and lobby the health ministry.2: Lobby the government through third parties such as an Israel-based supplier of licorice.3: Use Philip Morris’ database of more than 60,000 adult smokers to reach consumers and create a public debate through the media “to influence MPs,” or members of parliament.As a result the Israeli bans on advertising and ingredients did not go through. 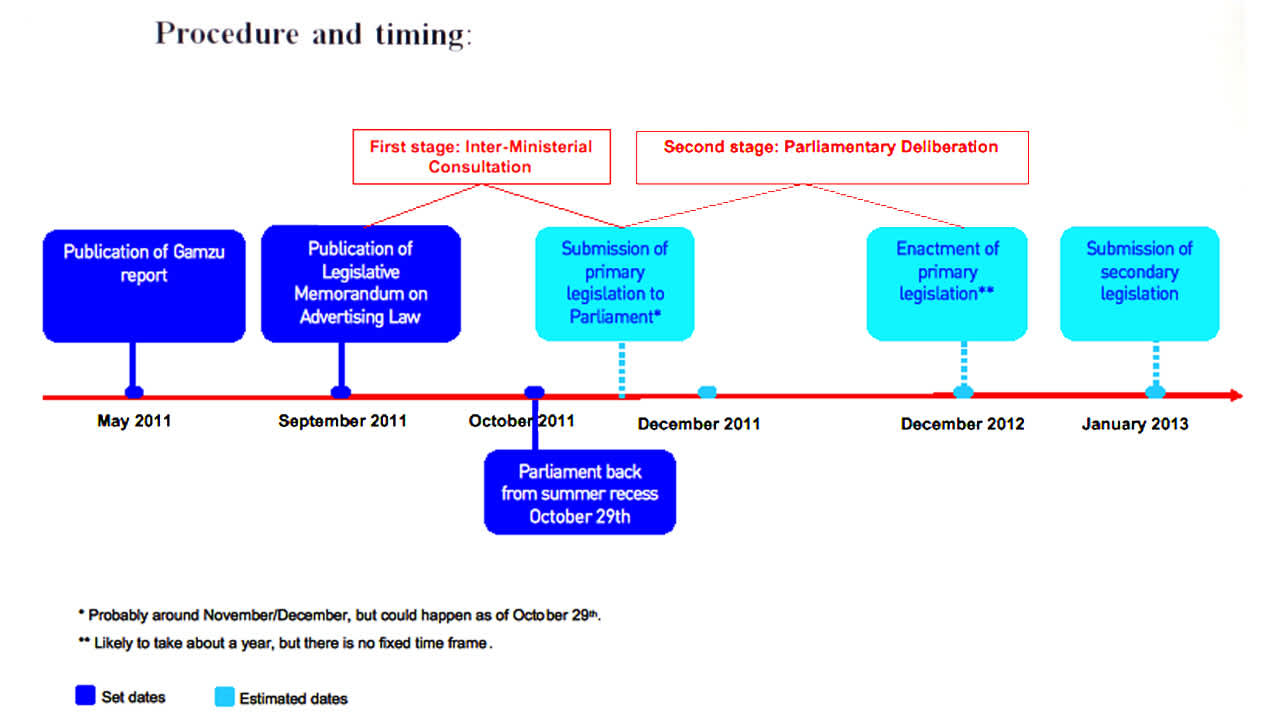 Philip Morris's lobbying plan in Israel. (Reuters)
The Philip Morris documents leave questions unanswered. In some cases, the documents show the company hatching plans to change an anti-smoking regulation or to monitor activists, but don’t always make clear to what extent or how the plans were executed, if at all. The 2014 PowerPoint presentation called for “achieving scrutiny” of tobacco control advocates and said a “global project team” had been established for this purpose. It did not list what means would be used.In some instances, Philip Morris’ lobbying plainly failed. In July 2015, the Ugandan parliament passed sweeping new anti-tobacco laws inspired by the treaty. All that was needed was President Yoweri Museveni’s signature, and the small African nation would become a leader on the continent in implementing a strict interpretation of the FCTC.Philip Morris sent an executive, a younger white man, to tell the septuagenarian president, who long ago had helped topple dictator Idi Amin, why the tobacco act was a bad idea. Sheila Ndyanabangi, Uganda’s lead health official for tobacco issues who was present at the meeting, described the executive’s approach as lecturing the statesman.“He said, ‘Ugandan tobacco will be too expensive’ and ‘it will not be competitive,’” Ndyanabangi said. Her account was confirmed by a senior Ugandan government official who was also present.FCTC chief Vera Luiza da Costa e Silva says there is a “real danger” of the tobacco industry influencing treaty deliberations.Museveni stared for a moment at the Philip Morris executive and a representative from a major tobacco buyer who’d come with him. The president then declared: “Slavery ended a long time ago.” There was a long silence in the room, recalled Ndyanabangi. Museveni said Uganda didn’t need tobacco, and the meeting was over. The president signed the bill that September.Museveni’s office did not respond to requests for comment.Philip Morris International says there is nothing improper about its executives engaging with government officials. "As a company in a highly regulated industry, speaking with governments is part of our everyday business," Tony Snyder, vice president of communications, said in a statement in response to Reuters' findings. "The fact that Reuters has seen internal emails discussing our engagement with governments does not make those interactions inappropriate."In a series of interviews in Europe and Asia, Philip Morris executive Andrew Cave said company employees are under strict instructions to obey both the company's own conduct policies and local law in the countries where they operate. Cave, a director of corporate affairs, said that while Philip Morris disagrees with some aspects of the FCTC treaty and consults with delegates offsite during its conferences, ultimately the delegations "make their own decisions.""We're respectful of the fact that this is their week and their event," said Cave in an interview in New Delhi, as the parties to the treaty met last November. Asked in an earlier interview whether Philip Morris conducts a formal campaign targeting the treaty's biennial conferences, Cave gave a flat "no."