Making the world a better place for everyone

The desire, even the need, to help others is part of the Jewish psyche and Jewish core values. 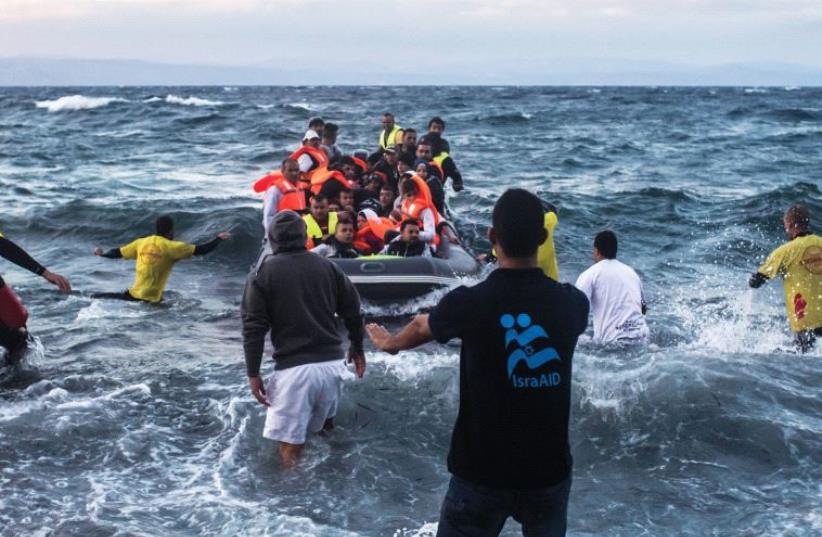 IsraAid workers bring refugees ashore in Lesbos, Greece
(photo credit: ISRAAID)
Advertisement
To us in Israel, it has become so commonplace that we’ve come to expect it. We hear of a terrible disaster somewhere, anywhere in the world – an earthquake, a typhoon, an avalanche or a tsunami – and we know that within 48 to 72 hours, a planeload of Israeli doctors, nurses, technical experts, psychologists, search-and-rescue teams and supplies will be on its way to help. Israel is often the first and proportionally the largest delegation to arrive, and within a few hours of the plane’s touching down, a field hospital will be set up in expert fashion and ready for work.While we obviously feel tremendous sympathy for the victims of these tragedies, we can’t help feeling a sense of pride as well as we see the Israeli flag flying above the area where hundreds of wounded are receiving life-saving treatment.The desire, even the need, to help others is part of the Jewish psyche and Jewish core values. The concept of tikkun olam, repairing the world, which has come to connote social action and social justice, impels Jews the world over to volunteer their time and expertise to help people who are temporarily in crisis and countries that require ongoing help to develop.National mitzva When tikkun olam is accepted as a national mitzva, as with the State of Israel, it takes the issue to a whole new level, as the potential for help when done in large organized numbers using strategies and state-of-theart hi-tech developments is far greater.The inability to stand by and watch others suffer when we know we could help is so embedded within the Jewish mentality that we help our enemies with as little hesitation as our best friends. This help is given altruistically. Most of the work done by Israeli organizations is never mentioned in the international press, and the majority of the countries we help have no political clout. We also know that our enemies will remain our enemies even after we’ve helped them.But emergency crisis management isn’t the end of the help that many countries receive from Israel. For some, it’s only the beginning. When most of the other international aid teams have packed up and gone home, having done wonderful work to alleviate the immediate effects of the disaster, Israel is still ready and willing to help the population rebuild their lives physically and emotionally.IsraAID is one of the most well-known Israeli relief organizations. The familiar blue and orange T-shirtclad staff of this Israel-based humanitarian organization has been first on the scene for most natural disasters worldwide since it was established in 2001 by Shachar Zehavi.Some 35 countries that have experienced natural disasters, such as Haiti, Turkey, Japan, Sierra Leone, Jordan and Iraq, have all been recipients of its help.After sending someone to assess the situation and seeing what is needed and what IsraAID can offer that others can’t, Zehavi sends a delegation of experts, professionals in many spheres and supplies to the area in need.

Earthquake in Italy, 2016In August this year, IsraAID was one of the few relief organizations to send search-and-rescue teams and trauma specialists to Italy shortly after the earthquake hit. Apart from Israel’s own cutting-edge methods for detecting people buried beneath the ruins, IsraAID’s personnel were also a tremendous help in relieving the Italian teams who were working day and night to try to find survivors amid the rubble.“Many relief agencies deliver their help and go home. We are never a hit and run group,” explains Zehavi. ”We always stay for a few months to provide support and professional assistance.”IsraAID’s mission is to efficiently support and meet the changing needs of populations as they strive to move from crisis to reconstruction and rehabilitation and, eventually, to sustainable living.

Training the local populationIsraAID teams always involve the local population so they can continue the work as best as possible after the relief organizations have left. They also train local people in how to deal with trauma and how to help people who have lost their homes and all their possessions.The psycho-social problems of these disasters are often underestimated while the physical after-effects are being dealt with, but helping the population recover from the trauma is the key to returning the area to a stable existence.Haiti and Japan “In Haiti, which was devastated by an earthquake in 2010, we have an ongoing medical program and a program for empowering women,” says Zehavi.“We also have a large presence in Japan, which was devastated by an earthquake and a tsunami in 2011, causing massive contamination from the nuclear plant in Fukushima. There is still a big contamination problem, and many children are only allowed out of their homes to go to school,” he says.The Japan IsraAID Support Program helps 30,000 people from 10 cities develop economic and psycho- social programs.Migrant/refugee crisisIsraAID is the only relief organization that is still on the scene from the beginning to the end of the line of migrants from Syria, Afghanistan and other countries seeking refuge in Europe. They are there 24/7 on the shore in Lesbos, Greece, to bring the freezing, soaking, terrified surviving migrants ashore from their flimsy dinghies.Arabic-speaking staff are there to help the traumatized children and adults, some of whom have seen their families washed away at sea. The Israeli nurses, doctors and trauma specialists provide immediate medical treatment, food, clothes and comfort to the terrified survivors of the perilous trip.

Raising awareness in IsraelIn Israel, IsraAID dedicates itself to raising public awareness about the importance of helping developing countries. Shachar Zehavi organizes conferences with high-profile guests who are known for their support of developing countries.Rock star/activist Bob Geldof, co-organizer of the legendary 1985 Live Aid fund-raising concert, which he set up to bring the world’s attention to the famine in Ethiopia, was the guest speaker at an IsraAID conference in Herzliya in 2011. He praised Israel’s intervention in Africa, despite the problems on its own doorstep.Actor Sean Penn delivered the keynote speech at IsraAID’s conference in 2015. Penn found out about IsraAID in Haiti when he was there in 2010 in response to the devastating earthquake. He had been moved by the television coverage that showed how much the Haitians were lacking in basic medication.Thanks to modern medicine, Penn’s son had just recovered from a brain injury after a fall, so this sensitive issue was the catalyst for his going to Haiti to help in the recovery process both physically and financially.