"The thousands of coins seized in the suspect’s home represent 2,500 years of history in the Land of Israel," the IAA said. 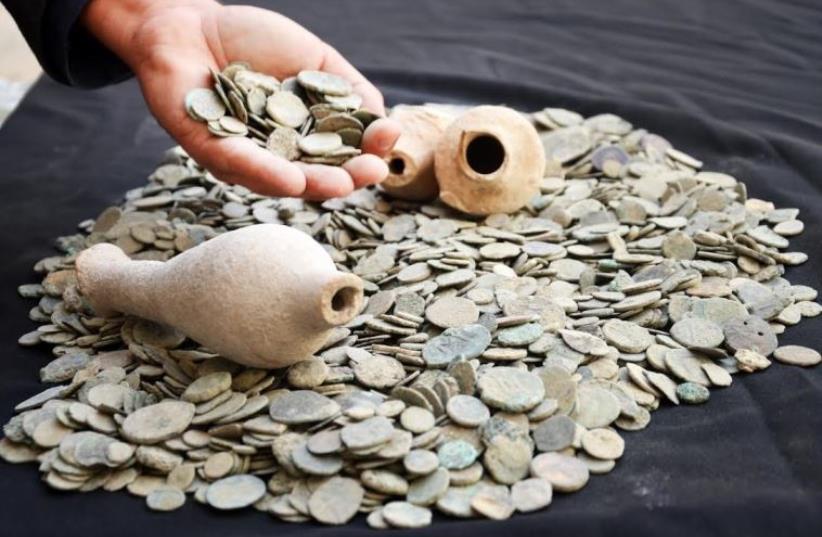 AN IMAGE of the seized coins
(photo credit: Israel Antiquities Authority)
Advertisement
A northern Israel antique collector was arrested this week for attempting to sell some 3,000 rare coins on the black market, the Israel Antiquities Authority’s Robbery Prevention Unit announced on Thursday.According to the unit, the unidentified licensed collector, who lives in a kibbutz in the Gilboa region located near the slopes of the Gilboa maintain range, was arrested on Tuesday.“It is suspected that the collector, using his computer, attempted to sell the coins to Israeli and overseas parties without permission or a permit to export antiquities from Israel,” the IAA said in a statement.“Some of the coins were discovered by him in the fields surrounding the kibbutz, and cleaned in a professional laboratory in his house.”Following a joint investigation into the suspect’s activities by the Beit She’an police and IAA, he was arrested in his home, where his computer and the coins were seized.During questioning at an area police station, the man confessed to attempting to sell the coins and was released to house arrest, the IAA said.“The thousands of coins seized in the suspect’s home represent 2,500 years of history in the Land of Israel,” the IAA said, noting that the coins were from the Hellenistic, Roman and Byzantine periods.Dr. Eitan Klein, deputy director of the Robbery Prevention Unit, described the case as “very serious.”“The suspect is a known illegal collector, and therefore we can demand that he is prosecuted to the full extent of the law and have his right to be registered as a collector taken away,” said Klein.“This directly violates the cultural heritage of all of us, and the ability of archaeologists to reach historical conclusions in future studies.”Klein said that formal charges to be filed against the suspect shortly could result in up to five years in prison.