Mandela’s grandson on visit: ‘Israel is the worst apartheid regime'

“The settlements I saw here [in the West Bank] reminded me of what we had suffered in South Africa..."

Mandla Mandela, grandson of Nelson Mandela, speaks to reporters in South Africa
(photo credit: SIEGFRIED MODOLA/REUTERS)
Advertisement
The grandson of the late anti-apartheid hero, former South African president Nelson Mandela, is on a “historic visit” to Israel though it seems he will not meet with Israeli officials.A statement said Mandla Mandela, a staunch Boycott, Divestment and Sanctions (BDS) supporter and member of parliament, would “hold several meetings with Palestinian leaders” but made no mention of Israeli counterparts. The Foreign Ministry appeared to corroborate the statement by saying, “We have no information on the visit.”During a joint press conference with Palestinian Prime Minister Rami Hamdallah on Monday, Mandela said: “The settlements I saw here [in the West Bank] reminded me of what we had suffered in South Africa because we also were surrounded by many settlements and were not allowed to move from one place to another freely.Palestinians are being subjected to the worst version of apartheid.”He added: “Israel is the worst apartheid regime” and called for the continued support of BDS and for South Africa to cut all ties with “apartheid Israel.”While meeting with Mandela in Ramallah, Hamdallah highlighted the inspiring legacy of the younger Mandela’s late grandfather.He also stressed the strength of bilateral ties between the Palestinian Authority and South Africa and the historic relationship formed between the late presidents Yasser Arafat and Nelson Mandela. He also praised South Africa’s position in supporting the Palestinian people and championing their cause in the international arena.Hamdallah briefed the South African MP on Israel’s so-called “violations against the Palestinians, including settlement expansion and displacement projects that constitute a major obstacle to realizing the dream of establishing a Palestinian state.”The two politicians also discussed ways to strengthen their cooperation and advance bilateral relations.“What we have experienced in South Africa is a fraction of what the Palestinians are experiencing,” Mandela said in an interview with Royal News English on Sunday. “We were oppressed in order to serve the white minority. The Palestinians are being eliminated off their land and brought out of their territories, and this is a total human-rights violations. I think it is a total disgrace that the world is able to sit back while such atrocities are being carried out by apartheid Israel.”Mandela is scheduled to meet with 83-year-old PA President Mahmoud Abbas as well as with other Palestinian officials during his visit. He also will visit Bethlehem, Jerusalem and Arafat’s mausoleum Arafat in Ramallah.Close to the mausoleum is a six-meter high, bronze statue of Nelson Mandela, who is famous among Palestinians for saying: “We know all too well that our freedom is incomplete without the freedom of the Palestinians.” 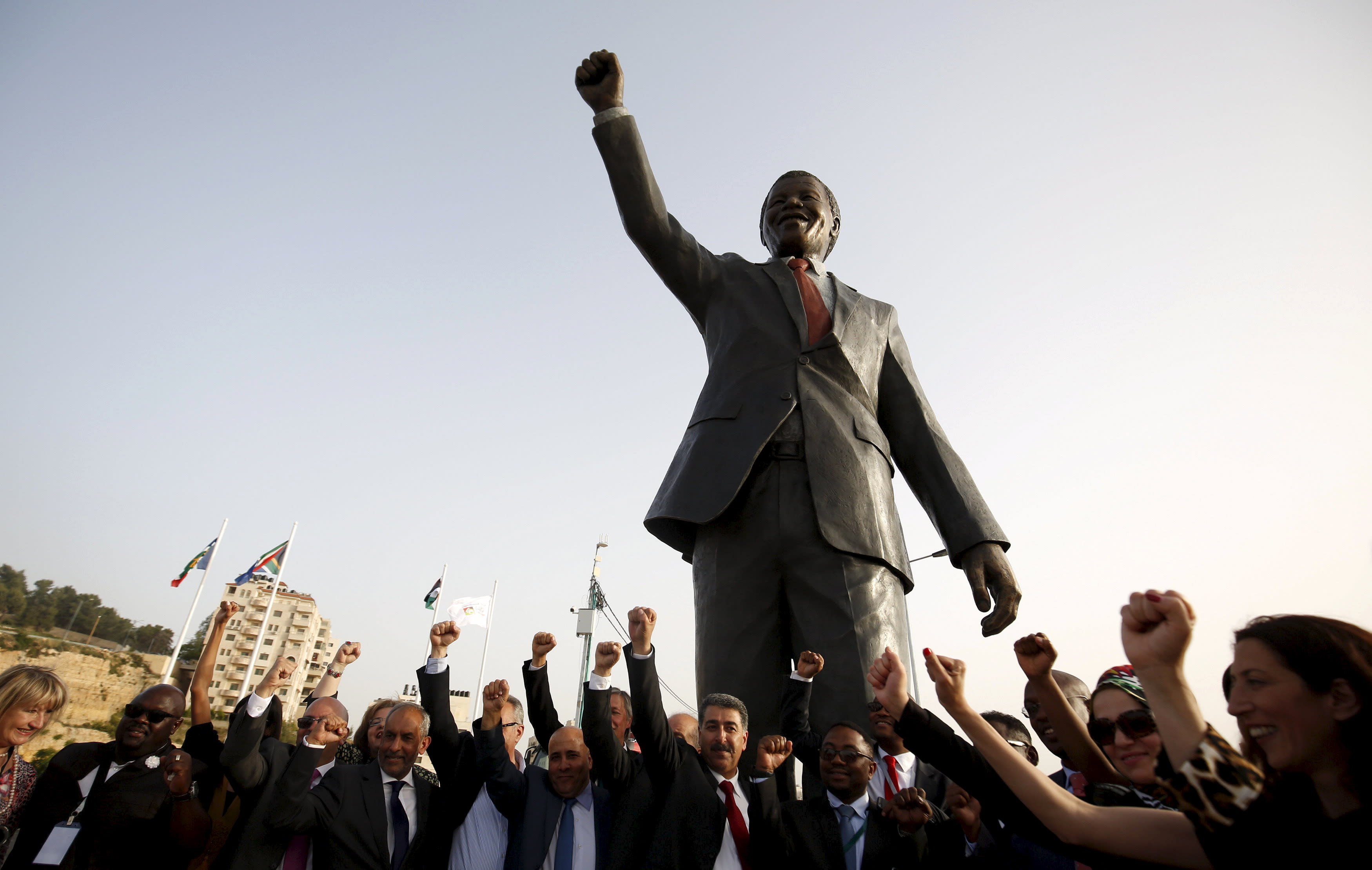 People cheer in front of a Mandela statue during the inauguration of Nelson Mandela Square in the West Bank city of Ramallah. (Mohammad Torokman / Reuters)
Mandela will be in the country until Wednesday.Prior to the four-day visit, he met with Palestinian leader and BDS co-founder Omar Barghouti in Amman.In the past, Mandela has made several calls for the expulsion of the Israeli ambassador to South Africa and has continuously supported the cutting of ties between the two countries.In August, he applauded the South Africa parliament’s decision to shun a delegation of Israeli MKs who were visiting the country.During an anti-Israel march in July, he demanded “that all ties be cut with Israel... no trade ties, no cultural ties and no travel! We demand that Israel complies with International law and demand the return of six million Palestinian refugees driven from the land of their birth. We demand that all occupied land be returned, and we condemn the continued expansion of illegal Israeli settlements on Palestinian land.”He continued: “Today, we stand to salute the brave and fearless Palestinian people who are facing the brutal might of the Israeli Army to defend al-Aksa with their bare hands. We demand that all occupied land be returned. Madiba [Nelson Mandela’s clan name] reminded us that our freedom is incomplete until Palestine is free.”Although Nelson Mandela was critical of “the occupation,” he fully supported Israel’s right to exist.

Nelson Mandela speaks with Shimon Peres after their meeting in Cape Town. (REUTERS)
During a visit to Israel in 1999, the former South African president said: “I cannot conceive of Israel withdrawing if Arab states do not recognize Israel within secure borders.” But he also made it clear “that talk of peace remains hollow if Israel continues to occupy Arab lands.”