She noted that in addition, Masa provides “tools” to engage in Hasbara for Israel turning the participants into Israel’s informal ambassadors to the world 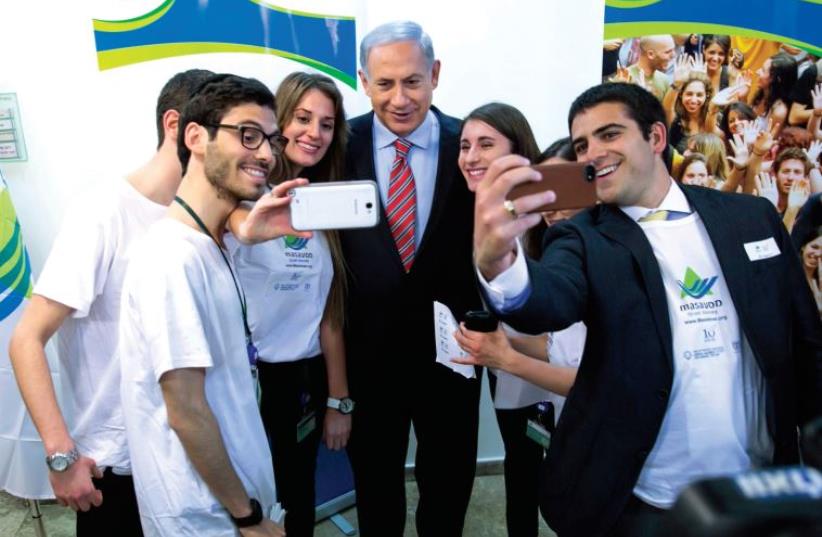 Benjamin Netanyahu takes a selfie with Masa participants
(photo credit: REUTERS)
Advertisement
Some 13,000 Jewish youth are expected to come to Israel this coming year to participate in Masa, the organization announced on Thursday.The program provides Jewish youth the opportunity to participate in over 250 immersive Israel programs ranging in length from six months to a year, which include internships, study abroad programs, and volunteer opportunities. These experiences aim to give participants practical academic or work experience while strengthening their connection to Israel.The Masa program is set to officially launch on October 31st during a ceremony in Jerusalem with the participation of Prime Minister Benjamin Netanyahu and Natan Sharansky, head of the Jewish Agency.“The youth arrive to Israel to participate in a wide range of Masa programs, from government, to economy and culture, hi-tech, teaching English, medicine and more,” Liran Avisar-Ben Horin, CEO of Masa said.She noted that in addition Masa provides participants with tools to engage in hasbara (public diplomacy) for Israel, turning those who take part into informal ambassadors for Israel to the world.“Every year they show that the year they spend in Israel – working, volunteering and being exposed the multi-layered and complex Israeli society – becomes the most meaningful in their lives,” she said.According to a recent survey conducted by Midgam Institute and released by Masa, some 87% of Masa participants said they intend to actively work towards strengthening Israel’s image in the world, while 81% of participants said their vision of Israel “changed for the positive” because of participating in the project.Slightly more than half, 58% of respondents, said they would “certainly” act against the Boycott, Divestment, Sanctions (BDS) movement.Since its founding in 2004 by the Prime Minister’s Office and the Jewish Agency, over 120,000 young Jews from around the world have participated in Masa programs.