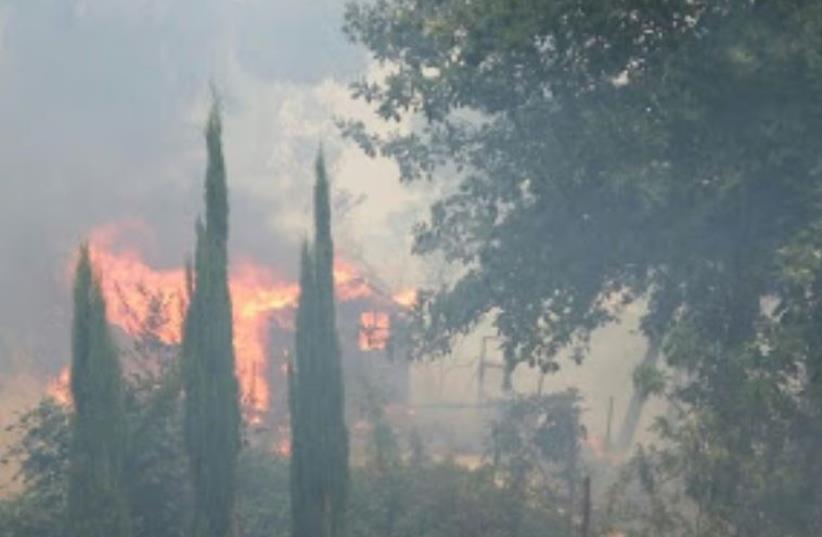 Fire in Jerusalem
(photo credit: SHUKI COHEN)
Advertisement
Strong winds and hot, dry weather helped a wildfire rage across more than 40 hectares (100 acres) of the Jerusalem Forest near the Givat Shaul area on Wednesday.A massive deployment of firefighters tried to get the flames under control. One firefighter was lightly hurt, and was taken to the hospital for treatment.By late afternoon, the National Fire and Rescue Services said that more than 60 fire teams and 130 firefighters from across the country – as well as more than 10 planes – were deployed.Udi Gal, the spokesman for the Jerusalem District of the National Fire and Rescue Service, said mid-afternoon that firefighters “had been working heroically to put out the blaze” that started in the morning next to the Har Hamenuchot cemetery.He said that no order had been given to evacuate residents of Givat Shaul, but that they had been instructed to stay indoors and close their windows in order to avoid smoke inhalation injuries.Around 4 p.m. the fire service put out a statement saying that firefighters had managed to put out the blaze, only to have to clarify an hour later that strong winds had helped whip the flames back up, though they managed to reestablish control soon after.A spokeswoman for the Israel Electric Corporation told The Jerusalem Post that the fire was coming close to its Jerusalem district offices but had not reached the building.All workers were evacuated as a precaution.She added that the fire was not expected to cause service disruptions.Since the early morning the fire has caused a number of road closures, including on the westbound section of Route 1, the main highway to Tel Aviv and the coast.A number of buildings were damaged.Investigators were trying to determine what started the fire, including the possibilities that it was the result of carelessness or arson.

Michelle Malka Grossman contributed to this report.
Advertisement
Subscribe for our daily newsletter