Family members said that they have difficulty understanding the vandalism, calling it “a crime of the utmost severity.” 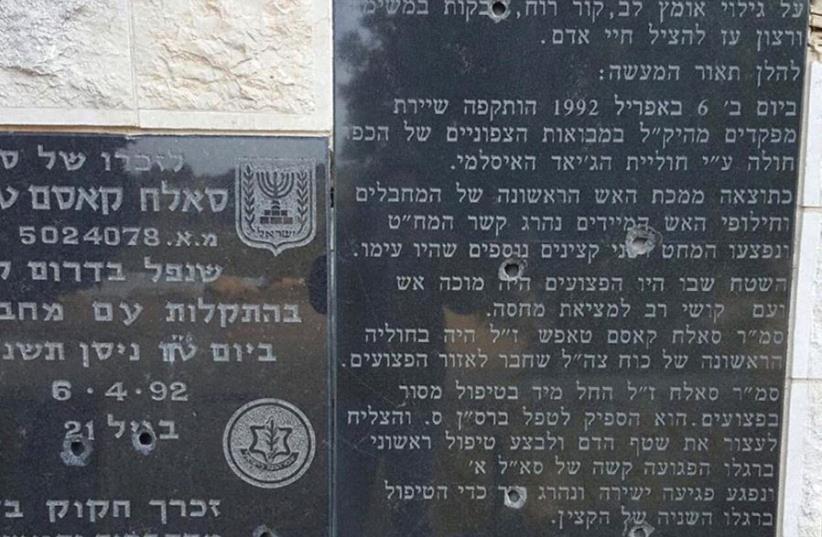 BULLET HOLES are seen in the memorial to hero medic Sgt. Salah Tafesh
(photo credit: Courtesy)
Advertisement
The memorial in the Upper Galilee for a Druse soldier was vandalized by gunfire over the weekend.A dozen bullet holes were found in the memorial for Sgt. Salah Tafesh, a medic who died as he went to the aid of a wounded comrade in southern Lebanon in 1992. The memorial stands between the Druse villages of Beit Jann and Hurfeish.His family has lodged a complaint with the police, who have opened an investigation.Family members said that they have difficulty understanding the vandalism, calling it “a crime of the utmost severity.”Tafesh was killed near the southern Lebanese village of Houla on April 6, 1992, when his convoy was ambushed by Hezbollah terrorists with mortars, rocket-propelled grenades and gunfire.Despite heavy fire, Tafesh treated wounded soldiers, many with serious injuries.Tafesh was treating seriously wounded Lt.-Col. (res.) Aviel Jarafi, when he was shot in the head and instantly killed.Tapesh’s story became a legend among combat medics and is told to soldiers during their training. He was posthumously promoted to sergeant and awarded a medal from the GOC Northern Command for his bravery.