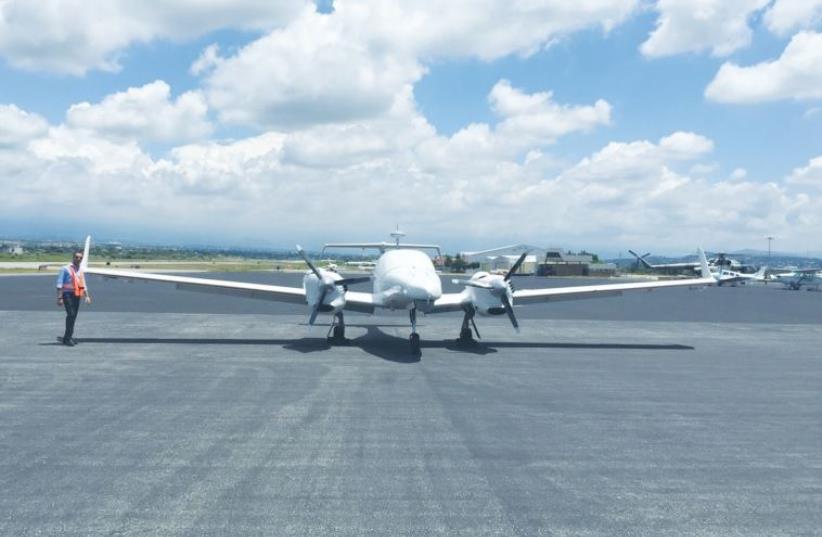 A DOMINATOR XP Medium Altitude Long Endurance drone is poised on the runway in Mexico
(photo credit: AERONAUTICS)
Advertisement
The Mexican government has purchased an advanced intelligence-gathering drone made by Israel defense company Aeronautics, the firm announced this week.The Yavne-based company’s largest unmanned aerial system, the Dominator XP, is based on a DA-42 twin star commercial plane, and is designed to provide intelligence, surveillance, and reconnaissance flight missions.It recently carried out a number of flights in Mexico.Balam Security, a Mexican security marketing company, facilitated the sale.“Providing comprehensive ISR [intelligence, surveillance, and reconnaissance] missions at long ranges, the Dominator XP is ideal for military as well as homeland security missions over land and sea,” an Aeronautics statement said.Aeronautics CEO Amos Mathan described the Dominator as the “pinnacle of Aeronautics development in the recent years. Taking a civil aircraft and transforming it into a UAS [unmanned aerial system] allows the operators to enjoy all the benefits of a large UAS at an affordable price, with exceptional reliability.This is the first contract in which we export the UAS instead of renting it to the customer, and I have no doubt that after the implementation of the system in Mexico we will soon market the Dominator to other countries as well.”Balam Security CEO Asaf Zanzuri added, “The maiden flights were successful due to the proficiency of the customers’ local teams, and the excellent cooperation between the two sides.”In October 2014, Aeronautics unveiled a new unmanned aerial system, the Orbiter-3b, describing it as its most advanced tactical drone.More than 10 foreign customers have bought the platform, the company said last year.