A pending police investigation against the spokesperson of Breaking the Silence sparks controversy countrywide. 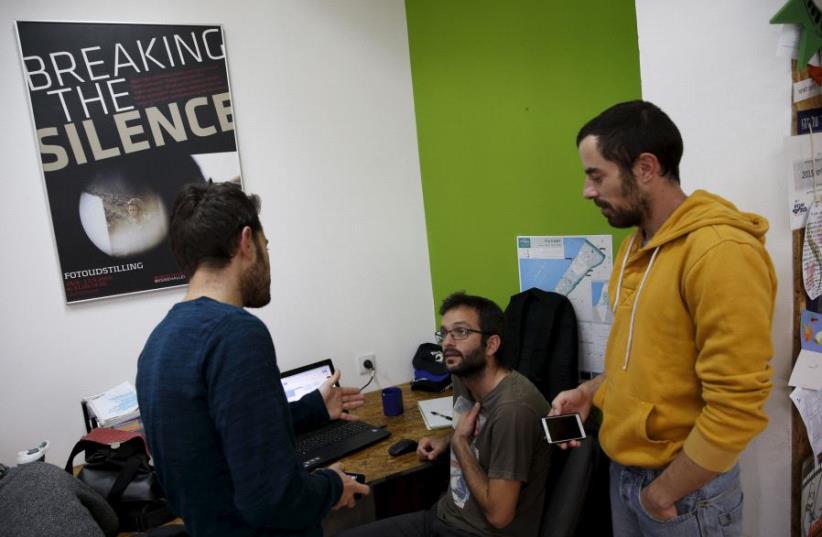 Employees work at the offices of "Breaking the Silence" in Tel Aviv, Israel, December 16, 2015
(photo credit: REUTERS)
Advertisement
Education Minister Naftali Bennett slammed critics of the decision to conduct a police investigation of Breaking the Silence spokesman Dean Issacharoff, suggesting hypocrisy for defending Issacharoff while blaming “Hebron shooter” Elor Azaria.“We see here someone who comes from the extreme Left’s Breaking the Silence, and he claims that he conducted awful war crimes against innocent Arabs,” Bennett wrote on his Facebook page on Sunday.“Why wouldn’t we open an investigation against him? And if Elor Azaria was called Dean Issacharoff and was also a member of Breaking the Silence, would he be immune from investigation?” Issacharoff was questioned by the police for an hour-and-ahalf on Thursday on suspicion of assaulting a Palestinian in Hebron during his military service.Before the weekly cabinet meeting, Bennett said he fully backed the law enforcement system on this matter.“We will find out if he is a criminal who needs to be in jail or a liar spreading lies while touring the world,” he said.“The IDF is the most moral army in the world. I served as a company commander in Jenin, Kabatya, Ramallah and Gaza.We never, ever used unnecessary force.”Defense Minister Avigdor Liberman echoed this notion and later wrote on Twitter that questioning Issacharoff was inevitable.“Whether he hit an innocent Palestinian or lied to defame the State of Israel and the IDF soldiers – he should be questioned and be punished,” he said.Meanwhile, 18 human-rights and peace organizations said in an open letter on Sunday that they stand in solidarity with Breaking the Silence, following the announcement of the police investigation.The organizations criticized Justice Minister Ayelet Shaked, who called for the probe, and Attorney-General Avichai Mandelblit, who ordered the investigation opened. They said in the letter they were surprised both Shaked and Mandelblit were “suddenly caring about violence against Palestinians.”“The decisiveness that you are demonstrating now in handling violence against Palestinians is impressive,” they wrote sarcastically. “In fact, more than 50 years the Palestinians are living under a violent occupation regime, [that included] military rule over civilians.”The organizations claimed that Issacharoff’s questioning was not for the sake of justice, but to deter such organizations from voicing their objection to the occupation.“We are standing here with our friends from Breaking the Silence, and neither do we shall remain silent – until the occupation ends.”Among the organizations signing the letter were Amnesty International Israel, B’Tselem, IPCRI, Ir Amim, Emek Shaveh, Peace Now and Physicians for Human Rights.