The video included a song uploaded by far-right fans of one of Israel's largest Premier League soccer clubs - Beitar Jerusalem. 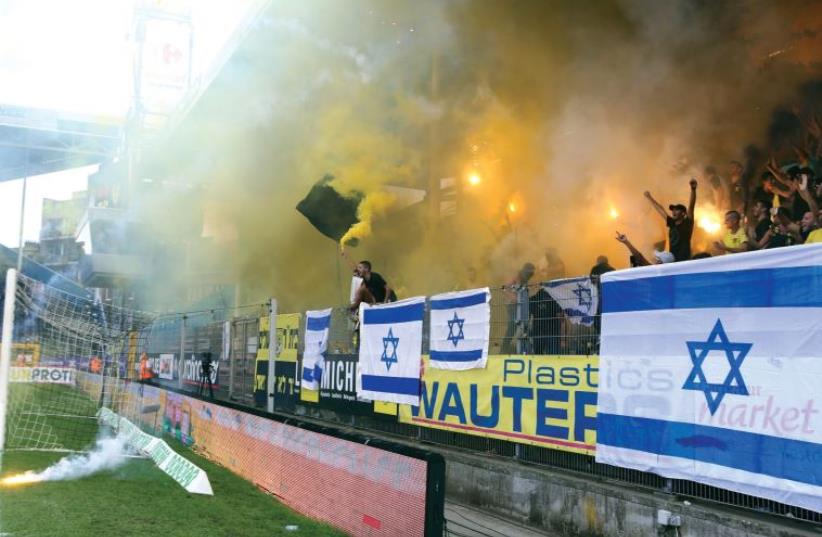 Jerusalem supporters from the La Familia fan group hold up a match against Charleroi in Belgium
(photo credit: UDI ZITIAT)
Advertisement
YouTube removed a video uploaded by Israeli far-right soccer fans after MK Ayman Odeh (Joint List) complained that it was racist and an insult to Prophet Mohammed, AFP reported.
The video included a song uploaded by far-right fans of one of Israel's largest Premier League soccer clubs - Beitar Jerusalem.
Named “La Familia,” the fan club is known for its anti-Muslim tendencies and often makes headlines after being involved in violent incidents. In July, some 1,200 people headed by MK Tamar Zandberg (Meretz) demanded that the group be designated a terrorist organization, following several violent incidents carried out by its members against anti-government protester and journalists.
The group has said that "protecting the Jewish nature of the State of Israel, which is crumbling in front of our eyes" is one of their most important values.
The song in question, which according to Odeh has been on YouTube since 2016, directly insulted the prophet and questioned his status, Odeh said.
“‘La Familia’ is a racist group ... in a truly democratic state this terrorist group would have been banned for a long time,” Odeh said.“Any offense against a religious symbol is totally unacceptable,” he added.
Odeh's appeal was made as the Muslim world has expressed rage in the last few days over French President Emmanuel Macron’s recent defense of cartoons depicting Prophet Mohammed, cartoons which many Muslims consider to be blasphemy. On Sunday Odeh addressed the tension between the French government and the Muslim world and wrote that "religion has great values and morals, and the Holy Arab Prophet Mohammed and his message are much higher than Macron's colonial mentality."

On Thursday, Sheikh Ikrima Sabri, head of the Palestinian Islamic Supreme Council, called for a “day of rage” to protest “attempts to harm” the Prophet Muhammad, as Palestinians took to the streets to protest against Macron's response to recent terrorist attacks carried out by Muslim extremists in France.