One of the family members secretly recorded a suspicious man's activities on his smartphone and sent the video to the Israel Antiquities Authority’s Robbery Prevention Unit. 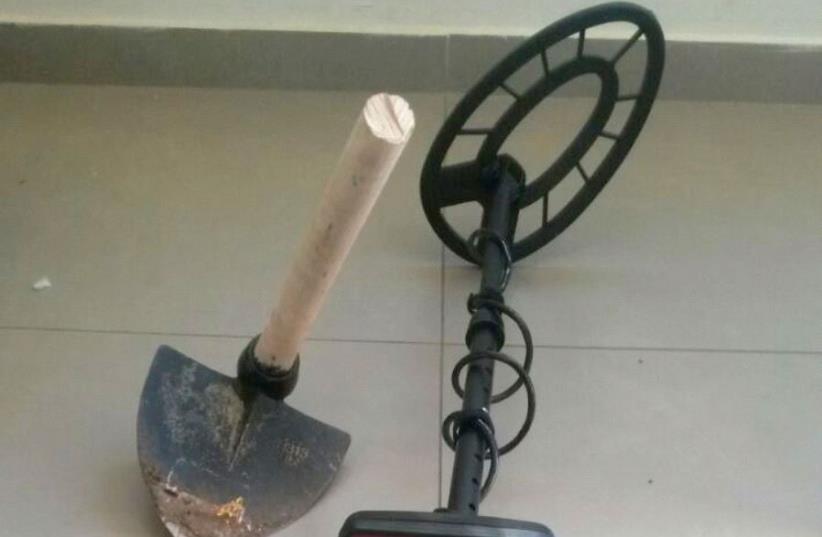 Seized metal detector and pickax used in suspected antiquities theft
(photo credit: COURTESY OF IAA ROBBERY PREVENTION UNIT)
Advertisement
February 11, a family from Modi’in spotted a suspicious man walking around a nearby archeological site from the Hellenistic and Roman periods with a pickax, shovel and metal detector.Suspecting that the man was attempting to loot buried antiquities there, when he began digging in the area, one of the family members secretly recorded his activities using a smartphone.After sending the video to the Israel Antiquities Authority’s Robbery Prevention Unit, inspectors from the unit came to the site to investigate, and found ample evidence of illegal activity, the IAA said on Monday.Following a brief investigation, one week later, inspectors were able to identify and track down the unidentified suspect at his home, where the metal detector and digging tools were subsequently seized as evidence.Although details of the investigation have not been made public, an indictment against the suspect, who is in his 50s, is expected to be filed in the coming days, the IAA said.
Archeologists vs robbers in race to find Dead Sea scrolls in June 2016, preventing archeology and antiquities theft(credit: REUTERS)
In appreciation for the family’s undercover work, which the IAA said helped prevent damage to the ancient site, they will receive a certificate of appreciation for good citizenship.According to the authority, use of a metal detector at ancient excavation sites without a license is a criminal offense punishable by up to three years in prison.