India's Modi to sleep in Trump’s bed in Israel 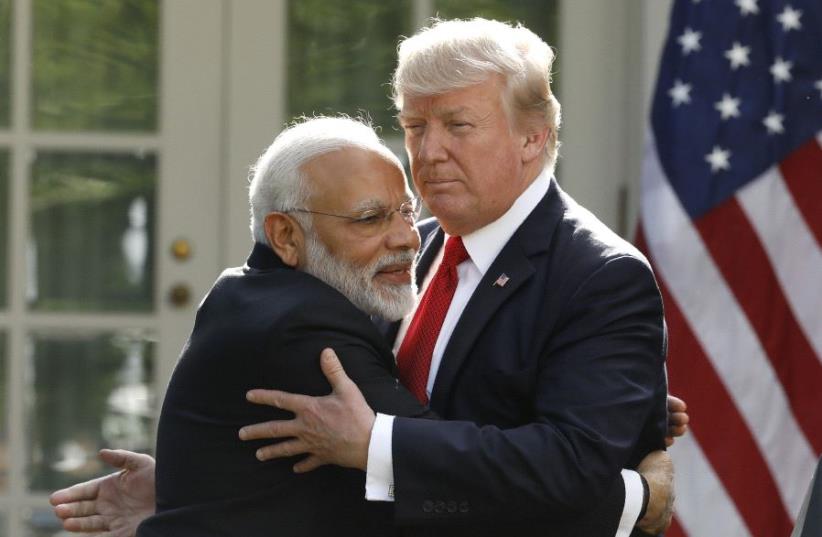 Trump and Modi embrace at the White House, 2017
(photo credit: KEVIN LAMARQUE/REUTERS)
Advertisement
After the big bear hug that Indian Prime Minister Narendra Modi gave US President Donald Trump in Washington this week, the news is that he will be the next occupant of Trump’s bed – well, not exactly. When Modi arrives in Jerusalem next week, he will be given the same luxury suite at the King David Hotel that Trump stayed in during his visit. Arrangements for Modi’s visit have been more strenuous than for Trump’s, but without some of the restrictions.For instance, during Trump's visit, the entire hotel was cleared of guests who were not a part of the presidential delegation. But for Modi's visit, only the upper floors and the parking area had to be vacated. The lobby of the hotel had to be sterile when Trump entered – no red carpet, no welcoming committee. On the other hand, Modi and his delegation will be welcomed with pomp and ceremony: a red carpet will be laid out, and the prime minister will be greeted on arrival by Michael Federmann, the chairman of the Board of Directors of the group that owns and operates the hotel. Federmann's own interest in Modi's arrival in Israel is notable, as he is also the chairman of Elbit Systems, a defense electronics company that has considerable deals with India.
Israel prepares for Trump visit (credit: REUTERS)
Ahead of Modi's visit, the hotel was overbooked, thanks to the large number of competitors and spectators flocking to Jerusalem for the 20th Maccabiah Games, expected to be the largest to date. As Modi and many members of his delegation are vegan, the hotel had to make significant adjustments to the menu for the luncheon meeting between Modi and Prime Minister Benjamin Netanyahu. On a compromise, fish will be served, but no meat or poultry. In order to best serve the Indian visitors, the hotel has also secured the services of Israeli-Indian restaurateur and television personality Reena Pushkarna and her team of chefs. Pushkarna and her team have been allocated their own kitchen for Modi's visit. The Director of Operations at the King David, Sheldon Ritz, has overseen the preparations for Modi's trip, and noted that he could not recall anything as intensive as Modi's visit, in terms of arrangements prior to arrival. Ritz has previously been responsible for the arrangements for visiting royals, presidents, prime ministers, and other high-ranking officials from around the world.  Over the past three months, no less than eight delegations have come from India to Israel to check on details about Modi's visit, and the actual advance delegation arrived on Wednesday to ensure that everything will go like clockwork.Some minor alterations were made to Modi’s suite to suit his convenience. The Indian prime minister is bringing his own personal valet who knows how to prepare tea exactly to Modi’s liking. When Indian President Pranab Mukherjee stayed the hotel, the housekeeping department found that it had to add to its supplies an item that had been virtually unknown in Israel since the departure of the British Mandate Authorities. But apparently British rule in India had left its mark, and the hotel had acquired a tea cosy to cover the presidential teapot.  It will now be taken out again to cover Modi’s teapot. Due to the fact that Modi will give frequent briefings to the large Indian press corps that is accompanying him, a special room will be set aside for this purpose. The most suitable room was the bar, which will be temporarily relocated to a section in the hotel lounge. “There are not too many hotels that would be willing to relocate the bar,” said Ritz.As was the case with Trump, when Modi leaves on the morning of July 6, everything at the hotel must remain in place for such time as his plane is at least two hours out of Israeli air space in case there is a reason for the plane to turn back.