What's next on Israeli's diplomacy agenda? 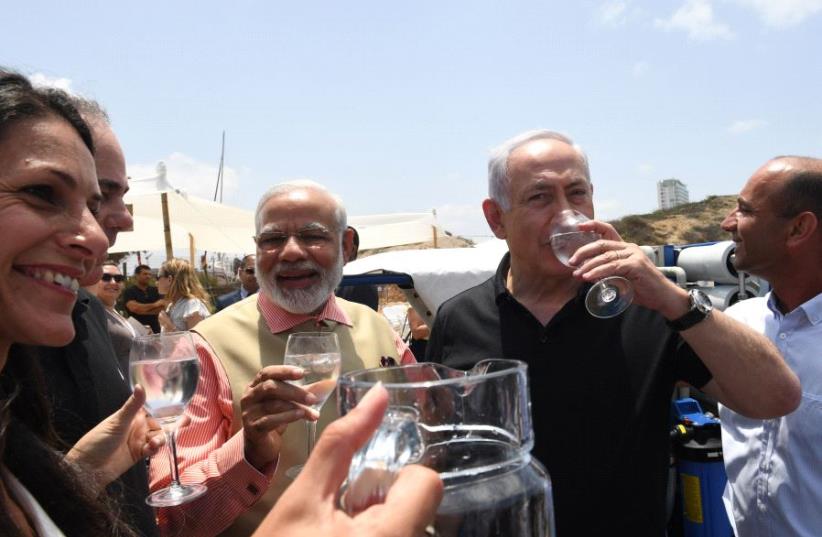 Israeli Prime Minister Benjamin Netanyahu and Indian Prime Minister Narendra Modi tour Dor Beach on the third day of Modi's visit to Israel‏
(photo credit: KOBI GIDEON/GPO)
Advertisement
India’s Prime Minister Narendra Modi completed his whirlwind 49-hour visit to Israel on Thursday by wading barefoot into the Mediterranean Sea with Prime Minister Benjamin Netanyahu and tweeting that “this successful visit will add more energy to India-Israel relations.”Netanyahu, who hardly left Modi’s side during the visit in a sign of the importance he attributed to it, escorted Modi to the airport for a brief departure ceremony.Modi flew from Tel Aviv to Hamburg to take part in the G20 meeting there.On Saturday night, another strong friend of Israel – Rwandan President Paul Kagame – will arrive for a two-day visit. Kagame is one of Israel’s strongest friends in Africa, and has been a key asset in Netanyahu’s efforts to build closer ties with the continent.Netanyahu visited Rwanda exactly a year ago when he toured four East African states, and this will be a reciprocal visit.Modi, meanwhile, began his final day in Israel by flying by helicopter with Netanyahu from Jerusalem to Haifa. Netanyahu took the opportunity to show Modi the country’s narrow waist and expand on Israel’s security considerations.The two men visited the Haifa Indian Cemetery, where Indian soldiers killed while fighting with the British against the Ottomans are buried. In a ceremony with both Indian and IDF soldiers, they laid flowers on the soldiers’ memorial and unveiled a plaque in memory of the Indian soldiers who fell in the battle to liberate the city.In the guest book, Modi wrote: “I am deeply honored to stand here today to salute the valiant Indian soldiers, who laid down their lives for the liberation of Haifa in the First World War. The exceptional bravery and supreme sacrifice of Maj. Shakur Dayat Singh, the ‘hero of Haifa,’ and his men will be remembered forever and continue to inspire generations to come. Next year, the century of the Battle of Haifa will present another opportunity to mark this enduring bond between India and Israel. Jai Hind [Long Live India].”Earlier this year New Delhi, in honor of the Battle of Haifa, named a street after the city.Following the ceremony at the cemetery, the two leaders drove to Dror Beach near Hadera, where they saw a demonstration of a Galmobile desalination unit – a mobile desalination device – capable of supplying water for 22,000 people per day.
PM Netanyahu and Indian PM Narendra Modi tour Dor Beach on the third day of Modi"s visit to Israel‏ (credit: GPO)
The plan was for the two men to merely taste the desalinated water on the spot. At one point, however, Modi removed his shoes, Netanyahu did the same, and they strolled barefoot into the Mediterranean. Netanyahu later presented a signed picture to Modi of the two of them, with pant legs rolled up in the water, and the inscription, “With deepest friendship on your historic visit to Israel.”The shot of Modi and Netanyahu in the sea will likely be the defining photo of this visit, much as the picture of Netanyahu and US president Barack Obama walking with their jackets over their shoulders on the tarmac at Ben-Gurion Airport when he arrived in 2013 was the defining photo of that visit.The two prime ministers then met for lunch with a group of Israeli and Indian CEOs, as part of the launch of a high-level Israeli-Indian business forum. They then toured a technological innovation exhibition that included products from Israeli and Indian firms.Among the Israeli products were a solar panel that enables users to use their mobile phones to purchase electricity on demand; a method to create electricity using aluminum as an energy source; and an advanced technological solution to treat brain disorders.The Indian companies exhibited a medical device that simplifies the test and diagnostic process of tumors; a new technology to immediately and quickly stop heavy hemorrhaging; and an environmentally friendly and non-electric water purifying machine.Modi capped his visit with a meeting with Indian students studying in Israel. Indian-Israeli academic cooperation has grown enormously over the last three years, and President Reuven Rivlin, on his trip to India in December, said that fully 10% of all foreign students studying in Israel are from India.