Rivlin hails Modi as one of world's 'greatest leaders of democracy' 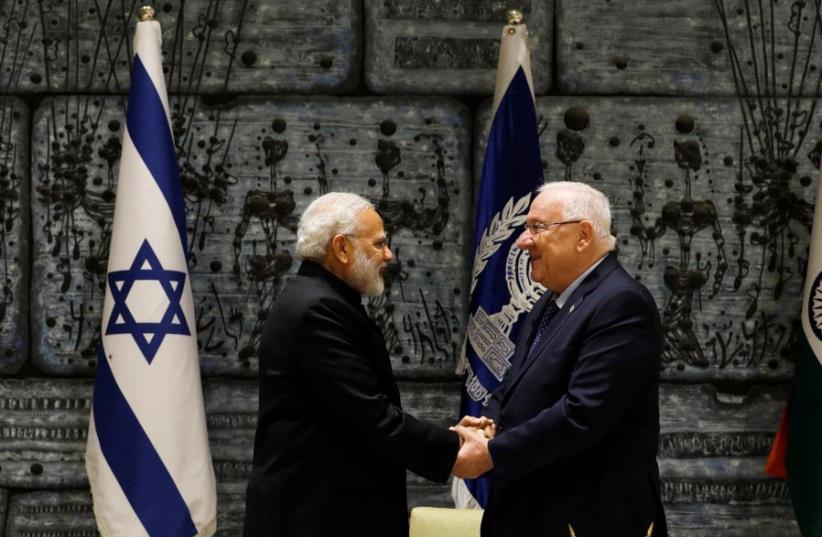 Indian Prime Minister Narendra Modi shakes hands with President Reuven Rivlin after signing a guest book before their meeting in Jerusalem July 5, 2017
(photo credit: REUTERS)
Advertisement
President Reuven Rivlin welcomed Indian Prime Minister Narendra Modi to his official residence in Jerusalem on Wednesday, calling him “one of the greatest leaders of world democracies.”Modi, in turn, noted Israel’s friendship. “Israel is a real friend,” he said. “I have really felt that feeling of kinship. I feel absolutely at home here.”
Indian Prime Minister Narendra Modi"s first day in Israel (July 4, 2017)
Commenting on “the warmth that has emanated from everyone that I have met here,” Modi included in his remarks Rivlin’s break from protocol when he came outside to welcome the prime minister.According to protocol, a president ranks higher than a prime minister, but because Modi is considered to be such a special guest in Israel, Rivlin circumvented protocol and went outside to greet his Indian visitor, as the car carrying the prime minister drove into the presidential compound.The two briskly traversed the red carpet and mounted a stage at the end of the main reception hall, where Modi signed the guest book. They then went into the president’s office for a 10-minute tête-à-tête before joining Modi’s waiting delegation and representatives of the media in a small reception hall.Indian Prime Minister Narendra Modi and President Reuven Rivlin hug upon Modi's arrival before their meeting in Jerusalem July 5, 2017 (REUTERSInterestingly, with only one exception other than Modi, the Indian men wore Western-style suits. Modi wore a formal black Nehru suit, and the other person wearing a Nehru suit chose a light coffee color. However, all the Indian women came in saris.Taking up their conversation from where they left off last November during Rivlin’s visit to India, Rivlin, in welcoming Modi, discussed commonalities between their two countries despite the differences in size and demography.Rivlin told Modi that he could not forget his visit to India, where he had found a really strong nation with strong ideas and strong wishes.Drawing on Israel’s early years and the struggle to promote “Made in Israel,” Rivlin said: “We understood very well your thoughts about the need to have partners who will ‘make in India,’ because the first thing the leaders of Israel at the time did, at the beginning of the State of Israel, the new state in 1948 – we felt that we should produce everything in Israel.‘Made in Israel’ was one of the greatest ideas, and one of the most important tasks, and we understand that very well. We are doing a lot to fulfill your ideas about ‘making in India,’ and I only suggested that there are some projects that we can do where we ‘make with India,’ and I know that you have accepted that, and I appreciate that very much.”