A special report from India looks at what's held India and Israel's relationship back until now, and how it could shape dealings with the United States. 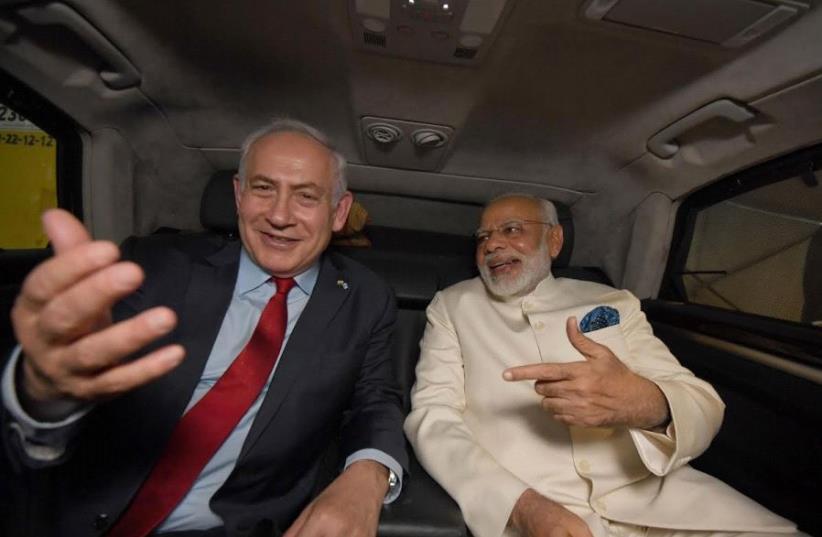 Indian Prime Minister Narendra Modi upon his arrival in Israel, July 4, 2017
(photo credit: HAIM ZACH/GPO)
Advertisement
Much has been said about Prime Minister Narendra Modi's foreign visits - more than 60 since taking office. He has made multiple trips to the US and other western nations that once refused him entry. In contrast, he's taken more than three years to visit a country that rolled out the red carpet to him when he was the Chief Minister of Gujarat in 2006. He wanted to go earlier, but there were multiple factors that contributed to the delay. The first one was the hesitation on the part of the old establishment and bureaucracy that was averse to breaking convention, not that bureaucratic red flags have deterred leaders, least of all this one. Weeks after becoming prime minister, Modi attended the UN General Assembly and set in motion what is being described as a new phase in the Indo-Israel relationship. Despite reservations from the Ministry of External Affairs, he met Israeli Prime Minister Benjamin Netanyahu on the sidelines of the General Assembly, who reportedly landed in New York three days in advance just for the meeting. In the months that followed, there was a string of high-profile visits from both sides. India was slowly but surely acknowledging an old friend and de-linking Israel from the Palestinians.The second reason that delayed this visit was the prevailing government in the United States. Given former US president Barack Obama's fraught ties with Netanyahu, New Delhi wanted to avoid any dissonance in Washington. Now, a new man is in the White House who himself visited Israel recently and has met both Modi and Netanyahu.So, the time is ripe, and Modi's Israel visit commenced with much fanfare. There was no sign of the supposed protest from the Muslim community in India, a fear expressed by previous governments to avoid going full throttle with Israel. In undertaking this visit and not going to meet the Palestinians, the Indian prime minister has not only sent a message to the international community but also busted some myths domestically. He has exposed the false narrative that insulted Indians of a particular community, doubted their alignment of personal and national interest and showed them as narrow-minded.
Indian Prime Minister Narendra Modi arrives in Israel, July 4, 2017
It is no secret, despite the best efforts from both sides, that India and Israel have shared a strong and old strategic partnership. But Modi's visit is an acknowledgement of the realization of India's security relationship with the US, of which Israel is a very important factor. In that context, it is one of the most significant foreign policy moves of the Modi government. It could shape the Trump administration's Indo-Pacific strategy and possibly contribute to the idea of an Asian NATO to counter China's assertiveness in the region. Beijing's trade volume with Israel is twice that of India, but on defense, there remain many roadblocks, mostly American. The Indian prime minister would do well to leverage this. Israel has supported India, both militarily and otherwise, in wars since the 1960s, even when there were no diplomatic ties. The Israelis were the first ones to call Bangladesh East Bengal and not Pakistan in 1971 - something that even India's then staunch ally the Soviet Union did not do. When the Kargil war broke out, an Israeli team flew in on a chartered plane to offer help to India. Modi's visit is a way to appreciate old gestures and build on them. It was time the world saw the hugs and the handshakes. In Netanyahu's words, "swagat hai," welcome, to this new era.
Palki Sharma Upadhyay is an editor and anchor at WION. She hosts India's only international news and views prime time show called "Gravitas."