To date, the Hague has not issued any response to the lawsuit filed against the PA, according to Shurat HaDin. 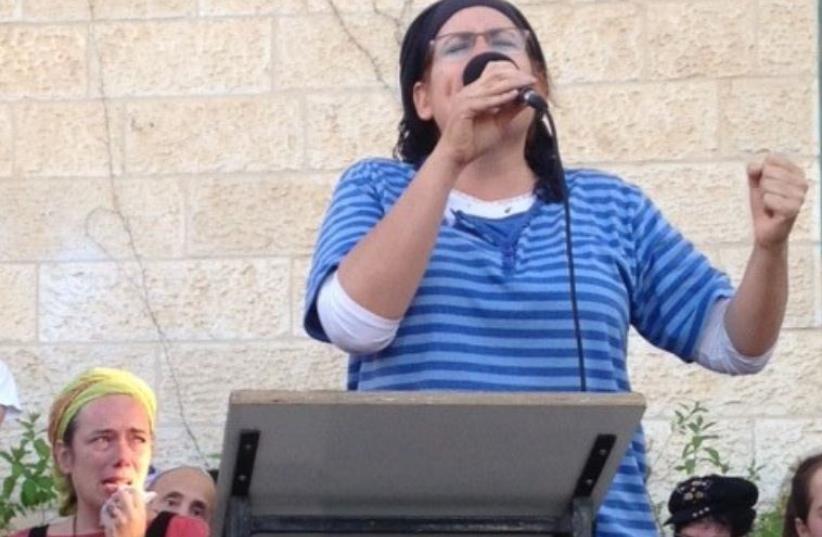 Hallel Yaffa's mother, Rena Ariel
(photo credit: DAVID BRINN)
Advertisement
Rina Ariel, mother of Hallel Ariel, a 14-year-old who was murdered in her bed by a Palestinian terrorist, spoke out against the decision by the International Criminal Court to open a war crimes probe against Israel in a letter to the ICC on Sunday.
In January, 2020, the Shurat HaDin organization filed a lawsuit on behalf of Rina and her husband against the Palestinian Authority concerning the “pay for slay” payments received by the family of the terrorist and the incitement by the PA which supports those who kill Israeli civilians with up to NIS 12,000 per month.
To date, the Hague has not issued any response to the lawsuit, according to Shurat HaDin.
In a letter sent on behalf of the parents on Sunday, Nitsana Darshan-Leitner, president of Shurat HaDin, stressed that while the ICC does not have jurisdiction over Israel, as it is not a member state of the court, nor the PA, since it is not a state, it does have jurisdiction over PA President Mahmoud Abbas and most PA officials since they hold Jordanian citizenship and Jordan is a member state.
The letter questioned why repeated submissions of evidence concerning crimes committed by PA officials were not included in the planned investigation and there has been no indication that these crimes will be investigated.
“The grant of immunity you have apparently given to PA officials is clear,” wrote Darshan-Letiner.
The letter included annexes containing evidence concerning the “pay for slay” program run by the PA and explaining the criminal nature of the “pay for slay” program in the framework of international law.
The Shurat HaDin president directly referred to Abbas, PA Finance Minister Dr. Shukri Bishara, the head of bodies responsible for Palestinian prisoners and terrorists and the CEO of the Quds Bank, as responsible for the crimes under Article 25(3) of the Rome Statute. Article 25(3) defines which people can be held criminally responsible and liable for punishment for crimes under the jurisdiction of the court.
“I protest the patently biased nature of your announcement and request that your investigation shift to proper matters, within your jurisdiction, which our organization has repeatedly placed before you, without response,” concluded Darshan-Letiner. “With all due respect, ‘blood money’ and incitement to murder come within the core reasons for the existence of the court, surely more than some of the political issues upon which you choose instead to focus.”
Hallel Ariel was murdered in 2016 in Kiryat Arba by Palestinian terrorist Muhammad Tarayrah.
Prior to Hallel’s murder, the terrorist who carried out the attack shared multiple posts on Facebook in which he praised terror attacks and stated his intentions to be a martyr. Carrying out his intentions, the terrorist infiltrated the West Bank settlement of Kiryat Arba, located next to Hebron, snuck into Hallel’s bedroom and stabbed her multiple times.
Hallel was a dancer, and had performed in Jerusalem the night before the incident. Her family had allowed her to sleep in while they left to carry out the day’s activities. Tarayrah had managed to infiltrate the settlement, and though alarms were set off, managed to sneak into the girl’s bedroom, stabbing her to death, before the settlement’s security team, of which her father was a part of, captured the terrorist, shot and killed him.
Hallel was brought to Shaare Zedek Medical Center in Jerusalem, but was pronounced dead shortly after arrival.
Celia Jean contributed to this report.