The biography tells the story of Miriam Peretz, a heroine who symbolizes love of Israel, the Jewish people and IDF soldiers, and the triumph of life over death. 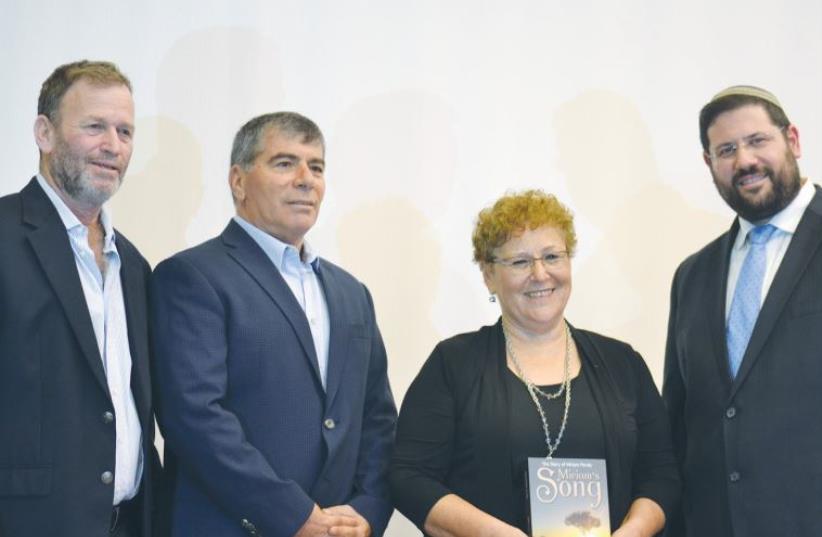 MIRIAM PERETZ, the mother of two fallen IDF soldiers, is honored at the Jerusalem’s Begin Heritage Center
(photo credit: Courtesy)
Advertisement
Two nights before Remembrance Day, Jerusalem-based Gefen Publishers held a book launch for the English translation of Smadar Shir’s book, Miriam’s Song.The biography tells the story of Miriam Peretz, a heroine who symbolizes love of Israel, the Jewish people and IDF soldiers, and the triumph of life over death.Gefen publisher Ilan Greenfield recalled that when he read Miriam’s Song in Hebrew, he vowed to publish an English translation. The book recalls Peretz’s dramatic life. Notwithstanding that her sons Uriel and Eliraz fell in the line of duty with the IDF, she retained her faith and love of Israel.Greenfield referred to a meeting with Prime Minister Benjamin Netanyahu, who cleared his calendar for Peretz and spoke with her for more than an hour. Netanyahu called Peretz “an exemplary... woman of valor.”Greenfield hailed her as “one of the best ambassadors of Israel.”Herzl Makov, executive director of Jerusalem’s Begin Center, said Peretz is often invited to speak because she is an inspiring person “and in our days there is a lack of inspiration.”Her life, he said, “is all about the decisions you make when destiny puts you in a spot of crisis.”Makov explained that this week is Peretz’s most difficult time. On Remembrance Day, she does not know which grave to visit first – that of Uriel or of Eliraz.Rabbi Avi Berman, executive director of the Orthodox Union which runs the inspirational seminar for soldiers Meshiv Haruach, (the Return of the Spirit), spoke of Peretz’s involvement in the program.He said the soldiers see her as a surrogate mother.“Both Uriel and Eliraz served and died on my watch,” said former IDF chief-of-staff Gabi Ashkenazi, who has a close relationship with their mother.Their connection began when he, as a lieutenant in the Golani Brigade in November 1998, came to the Peretz home to tell the family that Lt. Uriel Peretz, 22, had been killed in battle in Lebanon. Miriam Peretz asked to meet his comrades in arms, and told them how sacrifice builds strength. Ashkenazi made her talks to soldiers a regular feature in the IDF. “In 40 years of service, I have never seen such courage as Miriam embodied,” he said.In 2010, when he was chief-of-staff, Ashkenazi presented her with a citation of valor.“We learned from Miriam that the force of life is greater than the force of death,” he said.Ashkenazi noted how rare it was “even in a country so familiar with death,” to have to come twice to the same mother and tell her that her son had fallen in battle.Addressing himself directly to Peretz, Ashkenazi concluded: “I salute you on behalf of the soldiers of the IDF.”Peretz said Ashkenazi calls her on every Jewish holiday to wish her well. “Where else in the world does the chief-of-staff telephone every Jewish holiday to convey good wishes to bereaved families?” she asked.When Uriel fell in 1998 her husband, Eliezer, was still alive, but “he died of a broken heart” six years later. She had to face the loss of Eliraz, who died in 2010 fighting Hamas on the Gaza front in Lebanon, without Eliezer at her side.Eliraz was killed just before Passover, but the family went ahead and had a Seder, and the children were all dressed in their new clothes. As the family read the Haggada and came to the section where they were instructed to tell the story of the Exodus from Egypt from generation to generation, they wept, because for them that meant recalling the story of Uriel and Eliraz.Notwithstanding the difficulty, Peretz also remembered the commandment to “rejoice in your festivals” and she made the supreme effort to do this realizing that for her remaining four children and especially for her grandchildren this night was really not much different from other nights because Eliraz had been on duty on Rosh Hashana and Yom Kippur, and had missed his nieces and nephews birthdays. “They [Peretz’s grandchildren] were used to him being away.”Explaining the source of her faith, Peretz said that she dances a daily tango with God. Her family arrived in Israel from Morocco in 1964. Her parents were illiterate and knew only one word in Hebrew – Yerushalayim.“We lived in Beersheba, but when people asked my father where he lived he always said ‘Yerushalayim.’” While she had daily discussions with God since her multiple bereavements, sometimes even screaming at Him, sometimes thinking that He had forgotten her and forever asking why this had happened to her, she never lost faith. “What significance does their deaths have if I don’t continue to live,” she stated, adding that this was her victory over the enemies who killed her sons.“They wanted to break my spirit. They can take everything from me except my choice to live.”