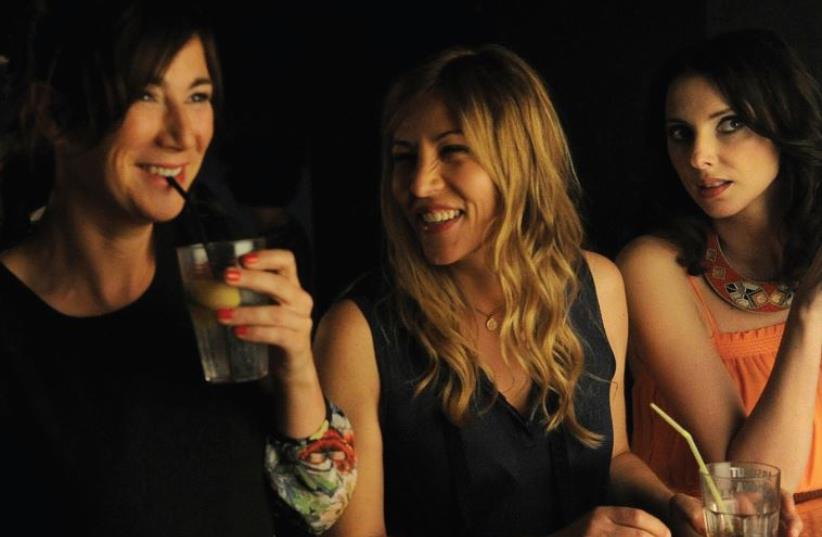 'La liste de mes envies' movie
(photo credit: PR)
Advertisement
LA LISTE DE MES ENVIES
Hebrew title: Hadvarim She’ani Rotzah
Written and directed by Didier Le Pecheur, based on a novel by Gregoire Delacort
With Mathilde Seigner, Marc Lavoine
Running time: 94 minutes
In French. Check with theaters for subtitle information.When I first worked at the New York Post, one of my jobs was to collect lottery tickets from virtually everyone in the newsroom and bring them to the candy store to enter them into the weekly drawing (“You’ve gotta be in it to win it,” was the motto). I started playing the lottery, too, although I admitted to the office manager that I didn’t think I would ever win.“If you did win, what would you do?” she asked, and I recited the usual list – fancy vacations, a nice apartment, etc.“OK, you’ve gotten your one dollar’s worth of fantasy,” she said.None of us ever won, but we all got to have our lottery fantasies. Now the new movie La liste de mes envies (The List of My Desires) looks at what happens when a person with only the most modest wishes for herself and her family wins an 18 million euro lottery prize. The director, Didier Le Pecheur, has similarly modest aspirations for his movie.Like so many recent French films, the movie looks like a layout from some lifestyle magazine. The actors, characters, clothes, apartments and streets are effortlessly chic and good looking.There’s an essential niceness and neatness about almost everyone that will either soothe or bore you, depending on your mood.Jocelyne, played by the appealing actress Mathilde Seigner (who is the sister of actress Emmanuelle Seigner, aka Mrs. Roman Polanski), runs a store full of multicolored threads, cute crafts and all kinds of other nice things, in a small, quiet city. She only enters the lottery at the urging of her friends, two pleasant women who both happen to be named Danielle, a running joke that would have been funnier if there were actually anything distinctive about either of the characters. She is very happy, although nothing is perfect, of course. Her husband, Jo (Marc Lavoine), is unemployed and feels miserable that he was let go after years with his company. Her son is dropping out of school to start a pancake restaurant. And, years ago, she and her husband had a child who died, and Jo revealed himself to be an abusive alcoholic. She gave him another chance, and he cleaned up his act.When Jocelyne wins the lottery, it’s a shock, and she keeps the news to herself. When she eventually goes to pick up her check, the woman who issues it gives her a detailed lecture on the perils of sudden wealth: people will pretend to be her friend, strangers will claim to have fallen in love with her, etc. But Jocelyne is quite happy as she is. She doesn’t even tell Jo about the 18 million euro check she has stashed in a book, and later, in the sole of one of her shoes.The closest she gets to becoming corrupted by the cash is making a list of what she would like to buy. Almost all her secret wishes are for fancy kitchen gadgets, and the list doesn’t take up more than a couple of pages.While you might be tempted to scream, “Dream big!” there is a plot twist that sends the story in a very different, but not entirely surprising, direction. The sudden change in mood provides the only real fun in the movie – other than what enjoyment can be had from admiring the tastefulness of her store, her home and her wardrobe.Anyone who has seen a movie or two knows that sudden wealth brings peril, but that doesn’t mean that we would turn down the money if it were offered to us. Jocelyne’s refusal to embrace her good fortune – after all, she could donate it to charity if she chose – is hard to identify with and begins to feel preachy.The movie has its moments, especially some scenes on the beach at Nice, but in the end it may make you long for The Treasure of Sierra Madre or some other movie where everyone is greedy – but human.