The campaign, launched ahead of International Day for the Elimination of Violence against Women. 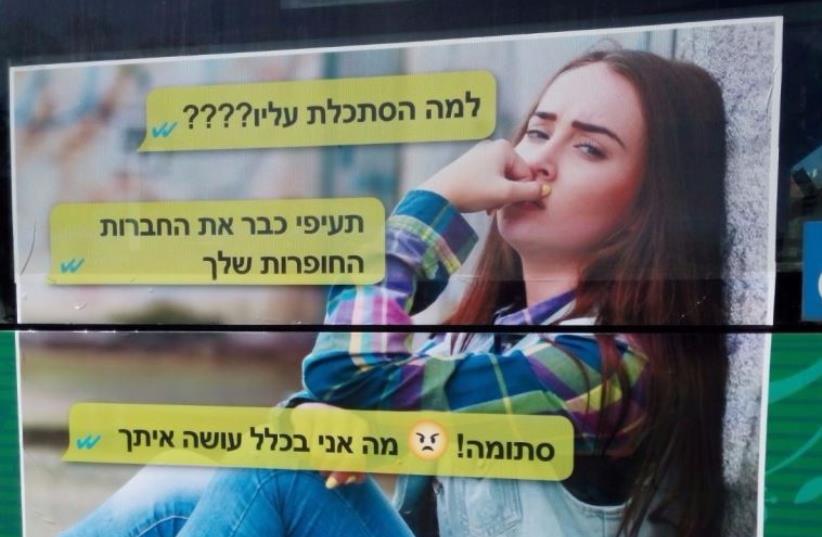 AAMAT advertisement on a bus targeting violence among teenage couples
(photo credit: Courtesy)
Advertisement
NA’AMAT, the movement for working women and volunteers in Israel, opened a campaign on Monday targeting violence among teenage couples.The effort, launched ahead of International Day for the Elimination of Violence against Women, marked annually on November 25, aims to draw attention to and open a public discourse on violent and abusive relationships among youth.“This year we decided for the first time to address the phenomenon which is growing beneath the surface and yet the feeling is that we often choose to sweep it under the rug,” Galia Wolloch, president of NA’AMAT Israel, said.The campaign will feature billboards on buses nationwide depicting a picture of a teenage girl alongside abusive correspondence sent by her boyfriend via the popular WhatsApp smartphone instant messaging application.“Why did you look at him???” and “Get rid of your obnoxious friends already” are the messages texted by the young girl’s boyfriend, alongside, “Stupid! [angry emoji icon] Why am I even with you?” The bottom of the advertisement reads: “This is not love; it’s up to you.”According to NA’AMAT, the correspondence represents common violent phrases that many Israeli girls are exposed to in an abusive relationship, and they often are not aware that this behavior and language is a form of violence.“Violence among teenage couples is an issue that must be dealt with seriously and as such we chose to appeal to youth in our campaign this year and bring forth this issue and not be afraid to confront it,” said Wolloch.Each year, NA’AMAT organizes a campaign surrounding the Day for the Elimination of Violence against Women. Last year’s campaign featured celebrities and an attempt to raise awareness among men of the phenomenon of violence against women.