The evening was especially symbolic for Netanyahu whose older brother Yonatan “Yoni” was killed while leading the Entebbe raid. 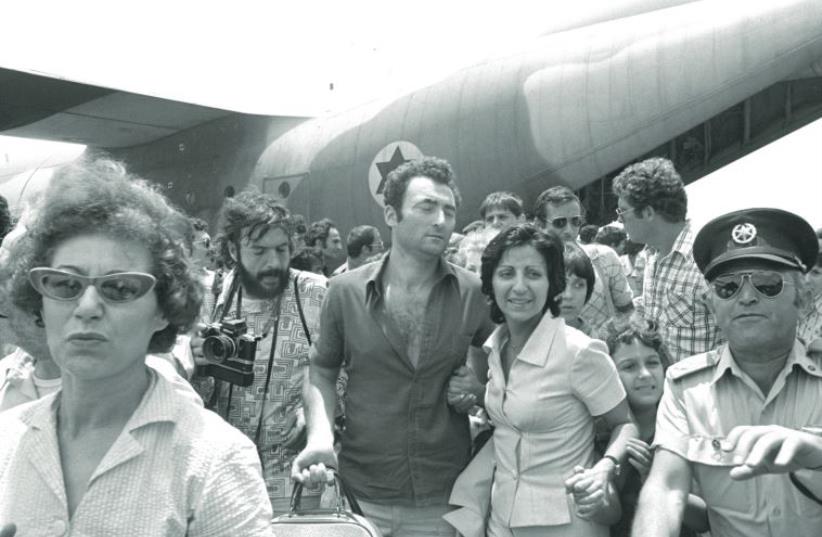 A police officer clears the way for rescued Air France hostages arriving in Tel Aviv after returning from Entebbe
(photo credit: MOSHE MILNER / GPO)
Advertisement
Israel is constantly involved in operations near and far to protect its security, Prime Minister Benjamin Netanyahu said Sunday night at the Jerusalem Theater as the country officially marked the 40th anniversary of the raid on Entebbe.“Israel’s long arm reaches every place necessary to remove us from danger. It was there then, and it is there now. And, if necessary, it will be there tomorrow,” he told the hundreds who gathered for the ceremony, including President Reuven Rivlin, former president Shimon Peres and survivors of the rescue that took place in Uganda four decades ago.“Not everything is known, not everything is publicized, but bold actions for the country’s security are taken all the time – some thousands of kilometers from home,” the prime minister continued.In July 1976, an Israeli commando squad was sent to Entebbe rescue more than 100 hostages who were held captive after a French Airliner was hijacked in Athens on a flight from Israel to France.The evening was especially symbolic for Netanyahu whose older brother Yonatan “Yoni” was killed while leading the Entebbe raid.“It’s been 40 years since this great accomplishment at Entebbe, but the price to five families was terrible,” the prime minister said.“Our sole consolation is that we have heroes such as those at Entebbe and heroes in Israeli operations who are prepared to throw themselves time after time in the face of death, who believe in the justice of our ways and are prepared to make the ultimate sacrifice so that we, their brothers, to live in this beautiful land,” he continued.Last week, the prime minister visited the site of his brother’s death while on a historic visit to Africa.Also addressing the crowd, President Reuven Rivlin said the operation “was and still is the flame that lights our way – still, today, we have the strength and spirit.”