The education ministry issued a statement in response saying that it sympathizes with the teachers but believes a strike is not the proper way to resolve the issue. 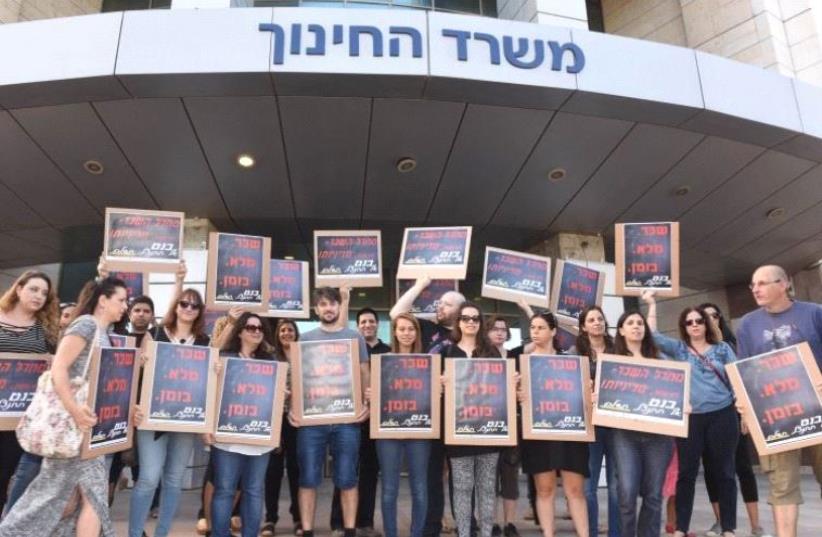 Teachers protest outside of the Education Ministry in Tel Aviv
(photo credit: AVSHALOM SASSONI)
Advertisement
The Teachers Union late Tuesday evening was forced to call off a nationwide strike slated for Wednesday after the Tel Aviv Labor Court in indicated it would rule unfavorably, urging the teachers to cancel the strike and negotiate with the Education Ministry.“The strike tomorrow was organized too rapidly, and that is to put it mildly,” Judge Efrat Laxer said in her decision.“There is no need for a strike tomorrow. The issue of sick days has been carried out over 30 years in a certain manner, and the union’s proposal to change the method of calculation was raised only four days ago.”The union initially announced its intention to strike on Monday due to the Education Ministry’s policy of penalizing teachers 1.4 days of sick leave for every day that they take off sick from work.The strike was slated to affect kindergartens as well as elementary through high schools throughout the country. Special education institutions were to operate as usual, as were schools in the communities surrounding the Gaza Strip.The Education Ministry filed a petition with the labor court on Tuesday seeking an urgent injunction to cancel the strike on the grounds that the Teachers Union was breaching a previous agreement with the ministry in which it agreed not to go on strike during the current school year.Additionally, the ministry said the strike was causing unnecessary harm to parents, who would have to find other arrangements for their children.In response, the union argued that the extent of the damage to teachers was too great to overlook and that attempts to reach an agreement on the issue with the ministry had repeatedly failed.The union said it would uphold the court’s decision and said that there would be “intensive negotiations held in the near future.”“Our goal is to immediately stop the exploitation of the sick days and the harm to teachers,” a union statement said.Yaffa Ben David, chairwoman of the Teachers Union, said following the decision: “I trust the court, which will know how to force the government ministries not to drag their feet or violate the rights of the teaching staff.”Local municipalities attempted to shoulder some of the burden to parents as authorities in cities including Herzliya, Kiryat Shmona, Mevaseret Zion and Ashdod announced kindergartens would operate as usual, with teaching assistants in lieu of teachers. Some municipalities announced that after-school frameworks would also operate as usual.According to the union, the ministry’s policy was only recently discovered when it began to list the number of sick days that were accrued and used on the payment slips – as the law dictated.The union said it had brought up the issue with the ministry “some time ago” and said that the ministry was “dragging its feet and not providing a clear answer to this known problem.”The strike came less than a month after the Secondary Teachers Association called off its strike over wages and working conditions that concluded with an increase in teachers’ base salaries.On Monday Ben David said, “We will not agree to a scandal in which a teacher... is sick for one day but it counts for a day and a half. I do not know one worker in the economy that would agree to work under such a condition.”Ben David said she was “embarrassed” by the ministry’s lack of a response.“It is obvious to everyone that the current condition is not right.The same officials that sit with us in meetings would act completely different if it were their sick days,” she said.The union chairwoman added that teachers would “stand by the rights we deserve just like any other worker.”The ministry issued a statement in response saying that it sympathizes with the teachers but believes a strike is not the proper way to resolve the issue.“The Education Ministry sees the teachers as the backbone of the system and it greatly works to advance their rights. As proof, recently it promoted the salaries of teachers,” it said in a statement.“In this case too, the ministry is sitting on the ground with the Teachers’ Union in talks to jointly advance the interests of the teachers.”