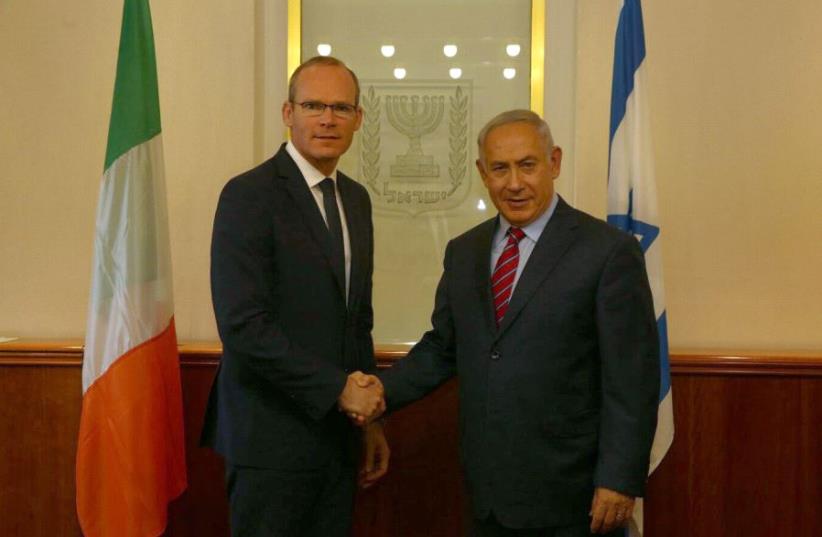 Netanyahu and Irish FM Simon Coveney
(photo credit: CHAIM ZACH / GPO)
Advertisement
Prime Minister Benjamin Netanyahu took visiting Irish Foreign Minister Simon Coveney to task on Tuesday for Dublin’s support of NGOs operating in Israel and the territories.The Prime Minister’s Office issued a statement after the meeting with Coveney, who arrived on Monday for a three-day visit, saying that Netanyahu asked the Irish foreign minister “why Ireland helps NGOs that call for the destruction of Israel.”According to NGO Monitor, Ireland, via its program for overseas development called Irish Aid, provides millions of euros directly and indirectly to NGOs operating in Israel, the West Bank and the Gaza Strip. Among the organizations receiving the funding, according to NGO Monitor, are far-left groups such as Al-Haq, the Palestinian Center for Human Rights, Yesh Din and Addameer.Deputy Foreign Minister Tzipi Hotovely, who also took part in the meeting, said Israel called for Ireland to stop supporting organizations trying to delegitimize Israel.Coveney became foreign minister in a cabinet reshuffle last month and, speaking to an Irish radio station before arriving on Monday, said he was looking forward “to hearing a diverse range of views, from the government of Israel and the Palestinian Authority, as well as from other international and nongovernmental actors.“Of course, I will also use the opportunity to make clear Ireland’s concerns about the impact of the continuing occupation and the fact that, as things stand, the prospects of a comprehensive peace agreement remain dim,” he said.In April, Netanyahu refused to meet with visiting German Foreign Minister Sigmar Gabriel after the latter insisted on meeting with Breaking the Silence.Netanyahu later told Likud lawmakers that he would not meet with foreign leaders who meet with organizations that work against IDF soldiers.After hosting India’s Prime Minister Narendra Modi and Rwanda’s President Paul Kagame in recent days, two leaders who did not focus on the Palestinian issue during their visits, Netanyahu was brought down to earth during his meeting with Coveney, which dealt primarily with the Israeli-Palestinian conflict.Ireland – alongside Sweden – has for years been considered by Jerusalem to be among the staunchest critics of Israel inside the EU. According to the Prime Minister’s Office, Netanyahu “expressed his dissatisfaction over Ireland’s traditional stance and told the foreign minister that his country does not condemn Palestinians for incitement and for glorifying those who commit terrorist attacks.”He also noted that many European countries overlook the core of the Israeli-Palestinian problem – not the settlements or “occupation” – but rather “the Palestinians’ refusal to recognize the state of the Jews.”Hotovely said she made clear that in any future agreement, the settlements will remain.Following the meeting with Netanyahu, Coveney posted a tweet saying it was a “good straight talking meeting,” and that he “raised concerns firmly and listened to Israeli perspectives.”On Monday he had a meeting on the diplomatic process with US envoy Jason Greenblatt, whom he referred to in a tweet as an “impressive guy.”Coveney is scheduled to meet with the PA ’s President Mahmoud Abbas and Foreign Minister Riad al-Maliki in Ramallah on Thursday.