The meeting comes against the background of the corruption investigations into Netanyahu, and into other members of the government. 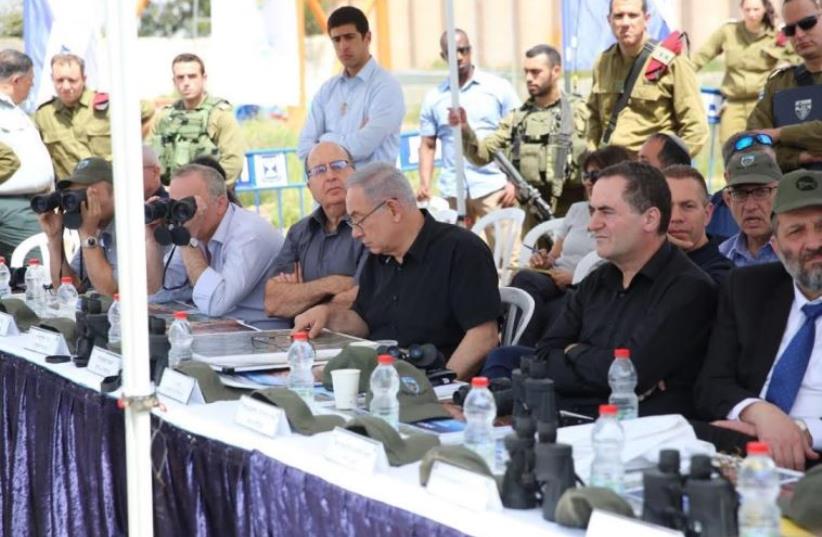 Netanyahu and his security cabinet visit IDF's Judea and Samaria division
(photo credit: PRIME MINISTER'S OFFICE)
Advertisement
Prime Minister Benjamin Netanyahu met with several leading National-Religious rabbis on Tuesday afternoon, and called on them to support him against efforts to “topple the nationalist government.”Among those present were rabbis Haim Druckman, Eli Sadan, David Stav and Yaakov Shapira.The meeting comes against the background of the corruption investigations against Netanyahu and other members of the government, including coalition chairman David Bitan and Interior Minister Arye Deri.During the meeting, Netanyahu invoked the approval by the Labor-led government of the Oslo Accords in 1993 – which are anathema to most of the National-Religious community – as a reason to continue supporting his government, noting that the left wing had won the election of 1992, leading to the Oslo process.“There is a political effort through demonstrations and other things to topple the nationalist government that we head, that is looking out for the Land of Israel and battling for it,” Netanyahu told the assembled rabbis.“Therefore, your standing [with me] is very important and I want to express my appreciation.“They are using values and speaking in a very lofty manner, when their motivations are entirely otherwise,” said Druckman, one of the most senior National- Religious rabbis in the country.“The truth must be told – those who are supposedly fighting corruption are themselves corrupt,” he said.Sadan described the behavior of “the political system” and the media toward Netanyahu as “insolent” and argued that the prime minister could have earned 10 or even 100 times what he earns as prime minister if he would work in the private sector.“So to say that there is a problem because you accepted a cigarette would be funny if it wasn’t such an unprecedented scandal... They want to switch governments like this and not at the ballot box,” said Sadan.Netanyahu’s meeting with the National-Religious rabbis comes just over a week after another prominent figure from the sector, Rabbi Yuval Cherlow, participated in and gave a central address at an anti-corruption rally in Tel Aviv.Considered a moderate figure in the National-Religious world, Cherlow told the crowd that corruption was a strategic threat to Israeli society, and that it was endangering public trust in the political leadership.And last weekend, a right-wing anti-corruption rally was held in Jerusalem, drawing several hundred protesters. Druckman issued a letter ahead of the protest saying he opposed it, that it was designed to help topple the government and that “everyone remembers the dangerous process that brought about the fall of the right-wing government in 1992 and the advent of the Oslo Accords, which brought about more than 1,000 deaths.”Following the meeting between Netanyahu and the rabbis, Yesh Atid MK Elazar Stern, who is himself from the National-Religious community, issued a statement pointing out the prime minister’s fealty to the Haredi political parties on matters of religion and state which are important to the National-Religious sector.“When Netanyahu needs a kashrut stamp because of the police investigations into him, he calls on the National-Religious rabbis, but when he needs something to do with kashrut, Shabbat, Judaism and the rabbinate, he doesn’t involve them,” said Stern.“Netanyahu doesn’t consult [National-Religious rabbis] on appointing rabbinical judges, the attitude of the state to Judaism and Jewish tradition, giving over the kashrut system to a Haredi monopoly controlled by people who don’t believe in the state at all, the monopoly of Haredi rabbis on marriage and divorce, the character of Shabbat in the State of Israel, and even enlistment to the IDF; on all these issues the prime minister chose not to invite the National-Religious rabbis to his office but rather Deri and Litzman who rule the roost.”