The Prime Minister’s Office confirmed the visit on Sunday, declining to comment further on the reason for the trip. 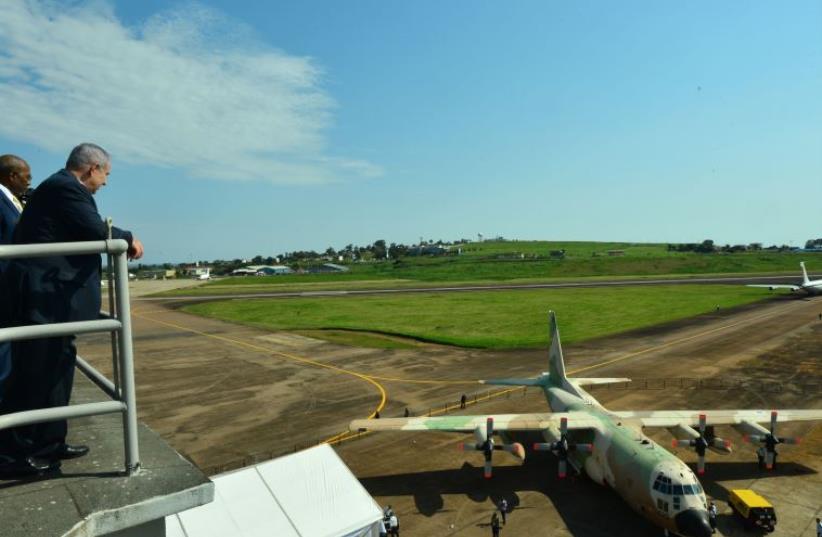 Prime Minister Benjamin Netanyahu visits Entebbe, Uganda
(photo credit: KOBI GIDEON/GPO)
Advertisement
Prime Minister Benjamin Netanyahu on Monday plans to fly to Uganda for the second time in the past four years for a one-day trip, amid reports that the African nation will open an embassy in Jerusalem.The Prime Minister’s Office confirmed the visit on Sunday, declining to comment further on the reason for the trip. Netanyahu is expected to meet with leaders from the region, Channel 12 reporter Dana Weiss tweeted, adding that further details were censored.Ugandan government spokesman Ofwono Opondo told local media Netanyahu is making “a one-day visit at his request… with a big delegation of up to 45 people.”Sources in Uganda’s Evangelical Christian community told The Jerusalem Post last week the country will announce having its embassy in Jerusalem during Netanyahu’s trip.Ugandan President Yoweri Kaguta Museveni is an Evangelical Christian.If Uganda opens an embassy in Jerusalem, it will be the third country to do so, following the US and Guatemala.However, reports the country plans to open an embassy in Jerusalem are false, Ugandan Permanent Secretary at the Foreign Ministry Patrick Mugova told local media. Kampala does not have a mission to Israel, while Israel has a visa processing office in the Ugandan capital.Netanyahu often points out that in 2016 he became the first sitting Israeli prime minister to visit Africa since Yitzhak Rabin in 1994, embarking on a four-country tour on the continent.As part of the tour, he went to Uganda to hold a seven-country summit and to mark the 40th anniversary of the raid on Entebbe, in which his brother Yoni Netanyahu, the operation’s commander, was killed.“Israel is coming back to Africa, and Africa is coming back to Israel,” he said at the time.Netanyahu also visited Liberia in 2017, where he met 10 African leaders at a summit of the Economic Community of West African States, and went to Chad last year.