Netanyahu: Israel will only ratify nuclear ban treaty when time is right

The issue of ratification, Benjamin Netanyahu said, “is dependent on the regional context and on the right timing.” 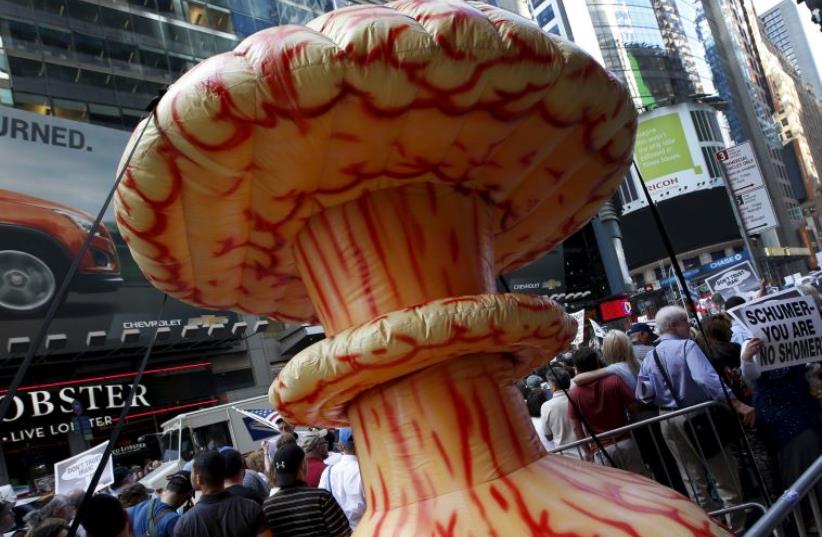 An inflatable mushroom cloud stands among demonstrators during a rally opposing the nuclear deal with Iran in Times Square
(photo credit: REUTERS)
Advertisement
Prime Minister Benjamin Netanyahu on Monday told Lassina Zerbo, the head of the UN organization created to implement a treaty banning nuclear tests, that Israel’s ratification of the pact is dependent on regional developments and the right timing.Zerbo, who heads the Comprehensive Test Ban Treaty Organization based in Vienna, was quoted after the meeting as saying Israel’s ratification is a matter of “when, rather than if.”Netanyahu, according to a statement put out by his office, told Zerbo in the meeting that Israel supports the Comprehensive Test Ban Treaty, which is why it signed it, though Jerusalem has not yet ratified the document.The issue of ratification, Netanyahu said, “is dependent on the regional context and on the appropriate timing.”The treaty, which will ban all nuclear explosions – both for civilian and military purposes – was signed in 1996, but will only go into effect when it has been ratified by 44 states that possessed a nuclear reactor or some nuclear technology at the time. Israel is among the eight countries that has not yet ratified it, the others being the US, China, Egypt, Iran, India, North Korea and Pakistan.India, North Korea and Pakistan are among 16 states that have not signed the treaty.Signing the treaty indicates that countries support its goals and creates an obligation to refrain in good faith from actions that would defeat the purpose of the treaty. At the same time, countries are not bound by the agreements until they actually ratify them.Zerbo came to Israel at the invitation of the head of the Israel Atomic Energy Commission, Ze’ev Snir. It is his third visit to Israel as head of the organization and marks 20 years since the signing of the treaty.The statement from the Prime Minister’s Office said the visit is an indication of the “successful cooperation” between Israel and the organization over the years.Israel was active in the negotiations that led to the treaty, which was adopted by the UN General Assembly in September 1996.