Noble "prepared to take actions necessary to protect the values of its assets" if outline does not get approval soon. 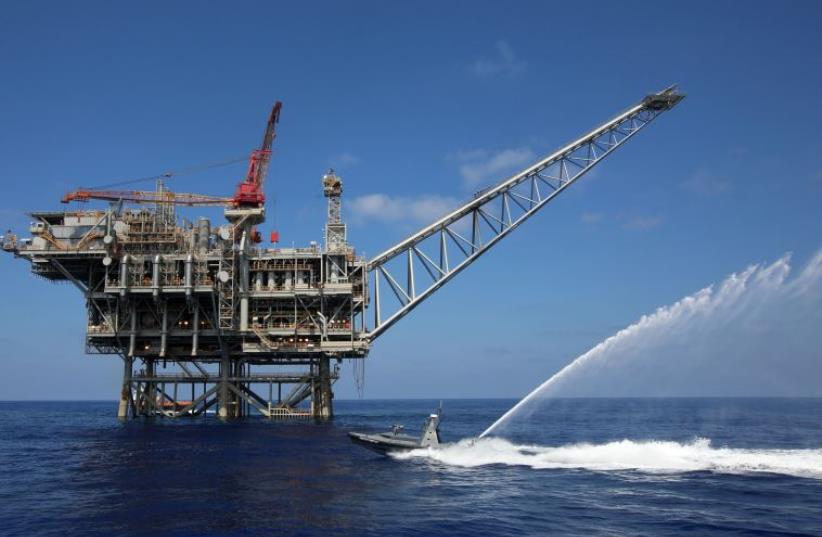 Israel Navy missile ship patrols near Tamar gas field‏
(photo credit: MARC ISRAEL SELLEM/THE JERUSALEM POST)
Advertisement
Prime Minister Benjamin Netanyahu is considering bringing the government’s natural gas plan to a vote in the Knesset on Monday, only days after his office said he would not do so.An alternative option Netanyahu is weighing is asking the Knesset to authorize the transfer of authority from Economy Minister Arye Deri to the full cabinet to circumvent the antitrust commissioner’s opposition to the gas deal.Article 52 of the Antitrust Law allows an economy minister to circumvent the antitrust commissioner’s objections if there are national security or foreign policy concerns.No minister has used it before; Deri refuses to be the first.In response to the still-unresolved situation, Noble Energy’s headquarters in Houston issued a statement on Thursday stressing that the firm is continuing “to work diligently with the government of Israel” to ensure both the development of the Tamar and Leviathan reservoirs and a stable investment climate. David L.Stover, Noble’s chairman, president, and CEO, described the plan’s outline as “a regulatory framework meeting these objectives.”“It is imperative that the government of Israel follow through on this approved framework without further delay,” Stover said. “Noble Energy remains fully prepared, and is well positioned, to take the actions necessary to protect the value of its assets.”One such action could potentially be arbitration, which the government is trying to avoid.On Wednesday night, the government submitted the gas plan to the Knesset, in order to keep its options open. The outline is not a bill, and therefore does not need the legislature’s approval, but a vote in its favor would be a symbolic victory and strengthen its public standing.The 61-seat coalition could get a majority for the vote on the gas deal. Finance Minister Moshe Kahlon (Kulanu), Construction Minister Yoav Galant (Kulanu) and Welfare Minister Haim Katz (Likud) will not vote for the plan due to financial conflicts of interest, but Yisrael Beytenu said its MKs would vote in favor.However, Yisrael Beytenu chairman Avigdor Liberman has stressed that he does not feel the need to help the coalition overcome technical barriers and would not vote to transfer Deri’s authority on Article 52 to the full cabinet. With Kahlon, Galant, and Katz unwilling to vote for it either, it is unclear how the coalition could execute that plan of action.The lack of a majority foiled the prime minister’s attempt to obtain Knesset authorization for the transfer of authority in July, and he pulled it from the docket after hours of deliberation and negotiation.On Monday, when Deri clarified to Netanyahu that he is adamantly opposed to signing Article 52, the Prime Minister’s Office said that Netanyahu had given up on the Knesset as an option.The PMO declined to answer questions Thursday as to what has changed since then and whether the voting map on Article 52 is different than it was the last time it was nearly brought to a vote.If Deri’s authority is not transferred to the cabinet, he plans to wait until there is a new antitrust commissioner who can approve the gas plan.The committee that will choose the next antitrust commissioner has not yet been appointed, but the selection of a new commissioner is expected this month.Antitrust Authority legal adviser Uri Schwartz, whom Deri appointed to fill outgoing antitrust commissioner David Gilo’s position temporarily while he seeks a permanent replacement, has said in closed discussions that he does not intend to advance the gas outline during the transition period.For a new antitrust commissioner to approve the outline, he or she would have to review the document thoroughly, conduct public hearings that could last for months, and then submit his or her consent decree to the Antitrust Tribunal for a final decision.A source in the energy sector said that it could take a year to 18 months for a new antitrust commissioner to approve the deal and for it to go into effect.The publication of the natural gas outline in question stems from Gilo’s threats in December to declare the gas plan a “restrictive agreement” because of the Delek Group’s and Noble Energy’s market dominance.Nearly eight months of negotiations between the gas companies and government officials ensued, resulting in a compromise outline. Gilo submitted his resignation over the issue four months ago, which took effect this week.The latest version of the compromise outline, which the cabinet approved on August 15, focuses on pricing, the development of the Leviathan reservoir and ensuring stability – in addition to previously agreed-upon points regarding the Tamar reservoir, several smaller basins, exports and other issues.On Thursday, Stover referred to ongoing fears circulating in Israel following Egypt’s recent energy disclosure. The abundant Zohr gas field, discovered by Italian energy giant Eni, is thought to be the Mediterranean’s largest at 30 trillion cubic feet (849 billion cubic meters).In response to the find, Israeli government officials and analysts expressed concern regarding the possibility of gas sales from Israel to Egypt. Last year, the natural gas companies operating in Israel’s waters signed letters of intent for the provision of 71 b.cu.m. of Tamar reservoir gas to Spanish Union Fenosa’s Egyptian liquefied natural gas plant and the supply of 105 b.cu.m. of Leviathan gas to the British Gas LNG plant, also in Egypt.On Wednesday, however, Egyptian officials said that private companies in Egypt would continue negotiations with the firms in Israel nonetheless.“Regional demand supports the further development of our world-class Tamar and Leviathan fields,” Stover said. “Noble Energy continues its ongoing discussions with natural gas customers throughout the region, and the government of Egypt publicly reiterated its support for the import of gas from Israel for both domestic and LNG export purposes.”“We are confident that the quality of our Israel assets, extensive appraisal and planning efforts, and proven track record of project execution and operating performance position us well to supply natural gas to the substantially underserved regional market,” he added.