Now, the military is acquiring the trailers, which can carry 8 tons of logistical equipment, and be attached to all IDF tanks currently in service. 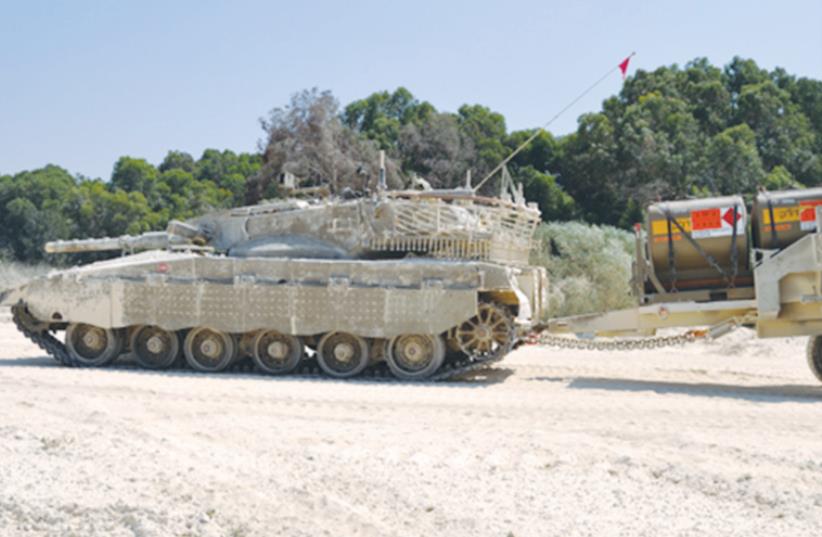 THE TWO-WHEELED BACKTRAIL (right) can carry 8 tons of supplies
(photo credit: COURTESY URDAN)
Advertisement
Command is set to receive dozens of advanced logistical trailers for heavy armored vehicles, designed to improve the ability of units to conduct lengthy offenses.The two-wheeled Backtrails, produced by the Netanya- based Urdan company, took four years to develop, and came after the IDF experienced severe logistical failures during the 2006 Second Lebanon War, according to Avi Raz, military marketing manager at Urdan.In 2006, IDF armored vehicles ran out of fuel and water 80 kilometers into Lebanon, and had to return to Israel under Hezbollah sniper and roadside bomb attack, Raz said. Following the war, the army resolved to prevent this from happening again, and Urdan began developing trailer models, and testing them with infantry brigades in a variety of terrain.Now, the military is acquiring the trailers, which can carry 8 tons of logistical equipment, and be attached to all IDF tanks currently in service.They can also be linked up to armored personnel vehicles such as the Namer and the Achzarit, and to the Puma infantry fighting vehicle, though not to the M113 APC, which is too light to pull the trailers.The trailers can carry fuel, water, weapons and ammunition, and service units in remote and inaccessible locations where establishing supply lines is difficult, Urdan said.“The trailer can carry everything required by soldiers, enabling them to operate independently in the field for long periods. Backtrail can also carry various types of containers for any purpose, and can even be used as a field emergency room,” the company said.Raz described the Backtrail as “revolutionary,” saying that its ability to fit any armored vehicle, and wheels that move 360 degrees on their axis, mean that the driver up front will be able to make ground without taking their presence into account.