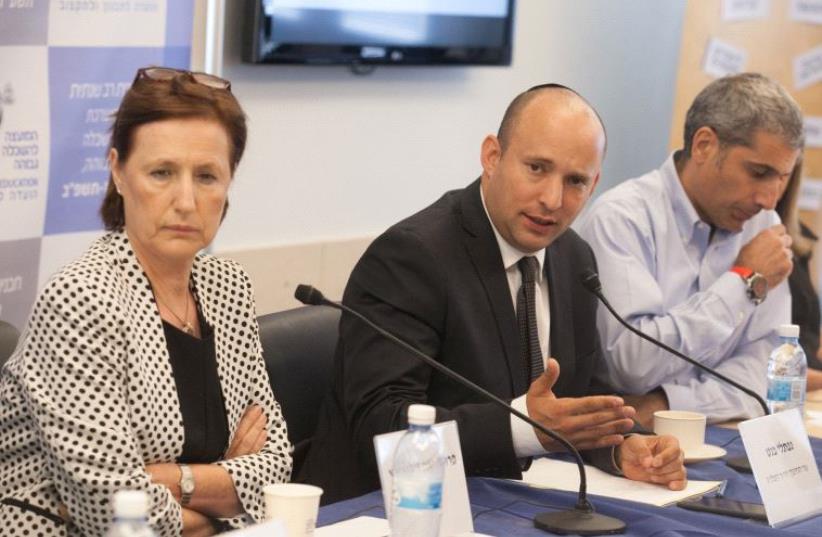 Education Minister Naftali Bennett discussing the new multi-year higher education plan.
(photo credit: MICHAL FATTAL)
Advertisement
The Council for Higher Education unveiled its new multi-year plan on Tuesday, allocating an additional NIS 6.8 billion to the higher education system over the course of the next six years.“Today, the State of Israel begins a new multiyear plan open to research and Israeli researchers, and it will ensure the continued progress and innovation of Israeli academia in the world,” Education Minister Naftali Bennett, who serves as chairman of the Council for Higher Education, said at a press conference in Jerusalem.Bennett, Prof. Yaffa Zilbershats, chairwoman of the Council’s Planning and Budgeting Committee, and Finance Ministry budget director Amir Levi presented the plan.It places emphasis on creating new research infrastructure, the internationalization of the higher education system, integrating minority groups such as Arab Israelis, haredim and Ethiopians into higher education and reinventing the university as a hub of innovation.“We will not give up on the level, depth and quality of research, but we will also not give up on the researcher, on the integration of ultra-Orthodox, Arabs, Ethiopian immigrants and the periphery,” Bennett said.“When the next Nobel Prize winner will be from Sderot and the next Fields Medal will come from Elad, when the Wolf Prize will be awarded to a researcher from Rahat and the Tel Aviv [University] Faculty of Medicine will be filled with students from the periphery, then we will know that we reached our goal, because this important institution has served its social purpose,” he said.According to figures presented at the press conference, the higher education budget in 2016 stood at NIS 10b. The new plan will see a yearly addition to that sum, with the allocation of NIS 449 million already in 2017, so that by the year 2022, the budget will be NIS 12b.“This is the most money being streamed into higher education since the foundation of the state,” Zilbershats said.The plan will also allocate NIS 2b. toward the creation of research infrastructure and the promotion of scientific research, with an emphasis on aggregating academic and scientific findings to minimize research costs and promote interdisciplinary research.The budget also includes the allocation of roughly NIS 1.2b. toward research grants by the Israel Science Foundation and other international funds for the promotion of research.“The plan is designed first and foremost to establish research infrastructure and to promote excellence in scientific research to turn Israel into a world leader in research in general and in computer science and Big Data in particular,” Zilbershats said.An additional NIS 300m. will be allocated toward the internationalization of the higher education system, with an emphasis on bringing more international students to study in Israel.The new program seeks to more than double the number of international students studying in Israel from roughly 12,000 to date to 25,000 within five years, with an emphasis on those studying toward advanced degrees.“There is no reason why we shouldn’t see the smartest of the [Jewish] Diaspora coming to study in Israel as well as students from China and India and other countries,” Bennett said.The plan also places a heavy emphasis on minimizing educational gaps and addressing national priorities.As such, the Council aims to invest some NIS 700m.to promote a 40% increase in the number of students studying fields that are currently in need in the Israeli labor market, particularly computer science, computer engineering and electrical engineering.Simultaneously, it will more than double the funding allocated, from NIS 40m. to NIS 100m., toward the promotion of humanities studies.Another main facet of the plan includes the allocation of an additional NIS 500m. each toward the integration of haredim and Arab Israelis into academia as well as NIS 100m. toward the integration of Ethiopians and NIS 70m. toward the integration of women into higher education.With regard to innovation, Bennett said there is no reason why universities should be regarded as “old and dusty.” The new program will allocate some NIS 300m. to reinvigorate campuses, providing digital courses, establishing innovation hubs on campus and improving the quality of teaching, he said.As such, the multiyear program also allocates some NIS 1.5b. toward optimizing and strengthening the existing education system, including attracting new faculty, introducing innovative teaching methods and promoting collaboration between institutions.Prof. Peretz Lavie, chairman of the Association of University Heads in Israel and president of the Technion- Israel Institute of Technology, welcomed the plan, saying it provides “recognition of the strategic contribution of Israeli academia and of its human capital to the country’s national strength.”The additional funds would allow for academic institutions to increase their investment in research infrastructure – a necessity to attract leading scientists and counter the so-called brain drain, Lavie said.